Colombians will decide in three weeks who will govern the destinies of their country. The candidates who will face each other in the second round, on June 19, are former leftist guerrilla Gustavo Petro and independent populist Rodolfo Hernández, who represented the anti-system options during the presidential election campaign.

In this Sunday’s election, two-thirds of voters broke with a political class they consider corrupt and ineffective, dealing a blow to the traditional parties that have governed the New Granada country for most of its history.

The force that has lifted the presidents of the last two decades to the presidency is losing. The candidate with the support of all the traditional parties —from Uribismo to the two great traditional parties, the Conservative and the Liberal—, Federico Gutiérrez, came in third place, 900,000 votes below the populist Hernández.

The proposal of Petro seeks to change the Colombian economic model. It proposes “the social market economy, with universal rights, but with respect for private property and free entrepreneurial initiative with social responsibility and, above all, the democratization of production conditions in the hands of the entire society.” Of course, it is the State, ergo the Executive Power, that watches over “the democratization of the conditions of production in the hands of the entire society.”

In the social market economy, the free and competitive market must be subordinated, as a means to an end, to the highest aspect of the economy, which is the creation of well-being. Here we find the connection between the former guerrilla and Castrochavism. The happiness (well-being) of the people rests in the hands of those who occupy Casa Nariño in Colombia, Miraflores in Venezuela, the Palace of the Revolution in Cuba and not in that of individuals.

Petro’s change includes nationalization, using the screen of social justice. It is the song of sirens to capture the vote of the dissenters who demonstrated in 2019 and 2021 due to the mismanagement by the administration of Iván Duque of the tax reform, and the economic crisis derived from the coronavirus pandemic that created one of the worst employment crises in Colombia in more than a century, leaving millions in poverty or on the verge of it.

Young people, above all, demand change, more opportunities for education and employment, and a more inclusive and equitable democracy and social economic system.

For his part, Hernández presents himself as the anti-system candidate, a outsider, not belonging to the Colombian political caste. His proposal for change is based on the end of politicking to attack some of the structural causes of social discontent: corruption, political and social exclusion of sectors of the population, poverty and inequality.

The night he won the right to contest the presidency, Hernandez He used social networks from the kitchen of his house to send his message: “Today we know that there is a firm citizen will to end corruption as a system of government. Today the country lost to politicking and corruption. Today they lost the sheaves that believed they would be the government forever. Today citizenship won, today Colombia won.” He only needed to say the slogan “Let’s make Colombia a great country” -in the best style of Donald Trump in the United States- to deepen the emotional bond with his followers. Because populism is based on pulling strings, touching emotions, beyond government promises and programs. Therefore, the importance of managing social networks, Facebook, Instagram, TikTok, Twitter.

While it is true that the former guerrilla triumphed in the first round, the populist is the favorite for the final round. Petro has only increased its vote by 6% compared to the second round of 2018. While Hernández has a great opportunity to capture the anti-Petro votes on June 19. A scenario that is chosen between two ways of change.

The survey of invader threw a technical tie between Petro and Hernández for this second round. In other words, at this moment the two are tied, so the shuffling is done again and the electoral contest begins again. 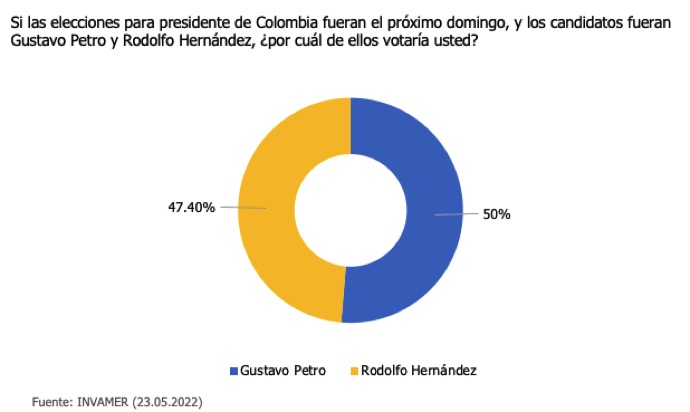 But Sunday’s results give Hernández an advantage because of the votes obtained by Federico Gutiérrez, which is a hard anti-Petro vote.

If the conditions of the first round are maintained and 85% of the votes of the traditional parties (Federico Gutiérrez) are against Petro, according to the estimate of the manager of Invamer, Martin OrozcoHernandez would require 350,000 votes to win. While Petro requires 2 million votes to win. 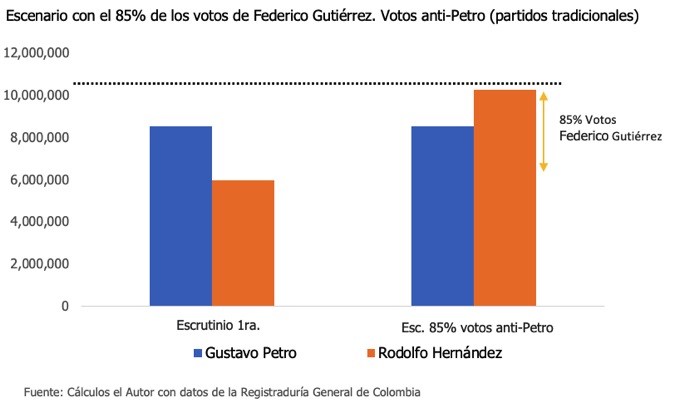 Consequently, the results show that Colombia is a country that rejects the left represented by Petro. He moves to the center, looking to Hernández for a creative solution to poverty, inequality, abortion, drugs, climate change, the trade relationship with Venezuela, among others. In addition, the message of change expressed by Colombians makes Petro before Hernández the well-known candidate, the traditional one, the one of always, of continuity. Third time he aspires to the presidency.

Of course, Petro’s carnivorous left will discourage the change that Hernández represents, fueling abstention and seeking to “buy votes.” The day he accepted the electoral results he said: “There are changes that are empty, that are not changes, they are suicides.”

Right now, Hernández is the favorite to win the presidential race on June 19, because his change is the least risky for Colombian democracy.

The change in Colombia points to the one with the least risk: Rodolfo Hernández

Colombians will decide in three weeks who will govern the

Ricardo Gil Lavedra demanded changes in the functioning of the

MasterChef juries competed against celebrities and gave them a lesson

There was no restriction regarding the dish, they could prepare

Maduro highlights tax collection and increased use of the bolivar

The owner of a car wash is murdered in Tanaguarena

In La Guaira on Tuesday morning, one of the owners of a car wash was murdered,

The President of the Republic and of the United Socialist Party of Venezuela (PSUV), Nicolás Maduro,

EFE Delcy Rodríguez, vice president of Nicolás Maduro, reported that in Venezuela A total of 29