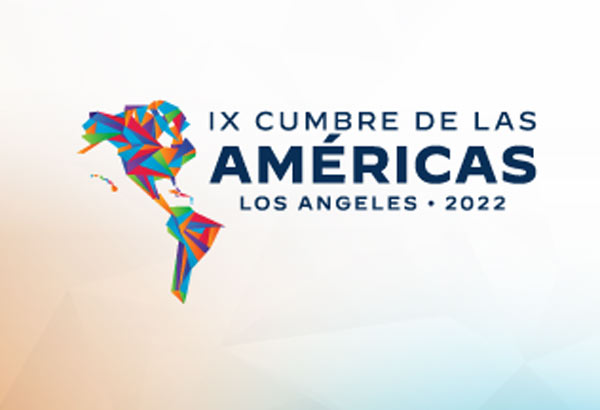 In two weeks, heads of state, government and delegates from the countries of the region will meet in Los Angeles, United States, at the IX Summit of the Americas. 28 years have passed since the first one happened in the city of Miami (1994). During this time, leaders of the Western Hemisphere have sought to align their efforts with goals that allow all the nations of the continent to overcome underdevelopment.

Compact for development and prosperity

The result of the eight previous summits shows that the Americas continue to search for the “pact for development and prosperity.” In Miami, it was considered that the strategies to achieve it were democracy, free trade and sustainable development.

We came from the fall of the Berlin wall (1989) and the dissolution of the Soviet Union (1991). The triumph of democracy and the market economy over the dictatorship of the proletariat and communism marked the I Summit of the Americas in Miami. This led the independent countries to agree to create, at the conclusion of the negotiations, the Free Trade Area of ​​the Americas (FTAA) no later than 2005. The great bet of the Bill Clinton administration (1993-2001) for the Western Hemisphere: create the largest free trade zone in the world with the integration of 34 countries, 750 million inhabitants and several emerging economies.

Regarding democracy, the Third Summit in Quebec (Canada) proposed the creation of the Inter-American Democratic Charter (2001), an important regional instrument for the defense of democracy in the Americas. With this mandate, the countries recognized that the effective exercise of representative democracy was a necessary condition for the development and prosperity of the American peoples.

The era of coups d’état that the region had lived through for decades in the 20th century ―a democratically elected government displaced by a military junta, the confrontation between powers that ended with the displacement of all of them by uniformed men, followed by massive human rights violations and the end of the rule of law – was coming to an end. However, authoritarian regimes have emerged after free, fair and competitive elections, which once they take power dismantle democratic institutions to continue exercising it.

In 2001, Cuba was the only dictatorship in the Americas. Currently, Venezuela, Nicaragua and Haiti have joined the list of authoritarian regimes, according to the Democracy Index 2021 prepared by the Intelligence Unit of The Economist. He adds that “Latin America has the deepest democratic recession of any region in 15 years (2007)”. In addition, “the average for the region fell by 0.54 points and several countries have had large setbacks.” 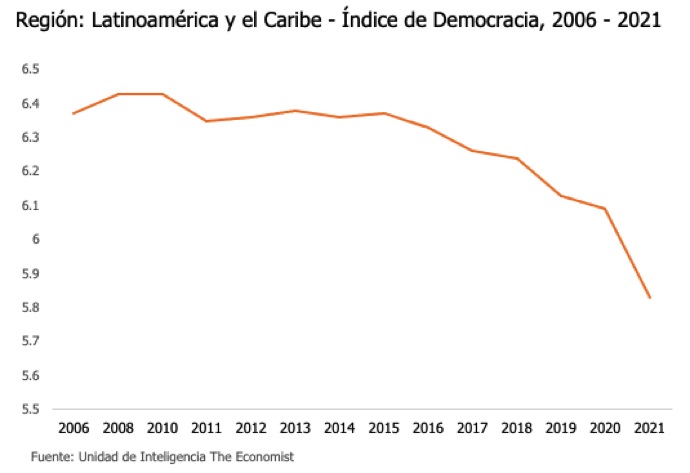 The theses of the anti-globalization and leftist movements, such as XXI century socialism and the Sao Paulo Forum, from the 1990s, stopped the creation of the FTAA at the IV Summit of the Americas in Mar del Plata, Argentina, in 2005.

The commodity supercycle led by the growth of China’s gross domestic product favored the region’s GDP in the first decade of 2000, strengthening the rentier model in South America. This led Latin America and the Caribbean to create intra-regional dependency mechanisms such as the community of countries that make up the Bolivarian Alliance for the Peoples of Our America and Petrocaribe.

The Caribbean consolidated an anti-American position by depending on Venezuelan hydrocarbons, drug trafficking and money laundering resulting from illicit activities and corruption.

The penetration of the drug business in Latin America and the Caribbean in the second decade of the 2000s, with the Venezuelan State as one of the main world centers for distribution and money laundering, has allowed the creation of an international criminal network linked to structures operating in countries with authoritarian regimes.

The Russian-Ukrainian war has shown the nature of Latin American governments. In the recent vote to suspend Russia from the UN Human Rights Council, Brazil, El Salvador and Mexico abstained; and Cuba, Nicaragua and Bolivia opposed. Venezuela did not vote because it was insolvent with the organization.

President Joe Biden has made it clear that he has democracy as an axis of his management, as he stated in the Summit for Democracy (2021): “We have to defend justice and the rule of law, freedom of expression, freedom of assembly, freedom of the press, religious freedom and all human rights inherent to each individual.”

If he is then consistent with his ideas, Biden must ignore the blackmail of Andrés Manuel López Obrador, president of Mexico ―who has obtained the support of leaders from the Caribbean, Chile, Argentina and Bolivia―, so that no country is excluded from the IX Summit of the Americas. His fight for democracy will lose strength if he invites the dictatorial regimes of Cuba, Nicaragua and Venezuela, the latter even with an open investigation in the International Criminal Court for alleged crimes against humanity.

If the day is taken out the day before, the countries aligned with Russia in the UN do not assume “democracy as an act but as a state”. So Biden should show firmness and avoid the mistake of the Democracy Summit, to which he invited non-democratic countries. The guest list, a mix of liberal democracies, declining democracies and authoritarian-leaning regimes, was heavily criticized. A turn in this direction could cost him his legacy and defeat in the mid-term elections in November.

Decree dismisses Ciro Nogueira from the Chief of Staff

Decree published today (30) in the Official Diary of the

The recommendations, articles, experiences and tips on the financial world

Immigration authorities released a group of Cubans who were in

(EUROPA PRESS).- The Court of the United States Patent and

Earnings and Personal Assets: AFIP extended the term until the end of June

They inspect spaces for the Lídice community

The mayoress of Caracas, A/J Carmen Meléndez, inspected the spaces for the community in the Lídice