The Association of Bank Employees of Uruguay (AEBU) reported that this Monday, August 29, a surprise strike began in all branches and headquarters of private banks, from Ciudad Vieja to Julio Herrera and Obes streets, including, with a subsequent concentration in front of Bank Heritage, in Ciudad Vieja.

As of 4:00 p.m., attention to the public was interrupted, the boxes were closed with a security guard and the workers were withdrawn, indicated AEBU.

Likewise, from the banking union it was reported that by resolution of the Council of the Private Financial Sector, the affiliates moved to the door of Banque Heritage, in Rincón and Ituzaingó, to concentrate on “repudiation of the entry into said banking institution of non-affiliated personnel of Citibank”.

“Despite having emphatically stated to AEBU that it would not hire any worker fired from Citi, Banque Heritage hired a non-union member, who was in that situation,” questioned the union.

The extensive conflict between workers and Citibank began with the announcement of the dismissal of 29 workers that ultimately led to three dismissals. 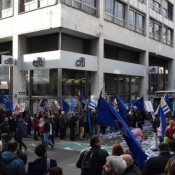 The Association of Bank Employees of Uruguay (AEBU) evicted the Citibank facilities,…

Check the names of the 37 ministers of the future government

O last names of ministers of the future government of

The reasons why New York is becoming ’empty’

A house with a backyard and space to set up

New year, new life? Not necessarily. At least for the

The CDMX goes for regulation of hosting platforms in 2023

Sheinbaum said that although the increase in tourism and the

Search continues for the body of a dismembered doctor in Carabobo

The event in the early hours of the morning when, through an anonymous call, personnel from

They presented the sanitation plan for 61 towns in the interior of the country, 6 in the department of Colonia

INAU exceeded the established goal and reached coverage of 3,490 places for children up to 3

The dollar had a second consecutive fall this Thursday. The US currency traded at $39,625 in

Internal tourism: what benefits Uruguayans have for spending the summer in the country

To promote domestic tourism, the Ministry of Tourism has a series of measures where Uruguayans are