After the regular round of the National Youth Baseball Championship has ended, positions have yet to be defined to assemble the keys to the Series of 8 that begins this weekend.

The 7th and 8th positions that are disputed by Los Santos, Chiriquí Occidente, Panama Metro and Veraguas are yet to be defined.

For today, Wednesday, January 25, the games that were suspended will take place, the most important being the game in Veraguas that is measured against Darién at 7:00 p.m. and in another of the matches, Coclé faces Colón at 2:00 pm, both at Rod Carew Stadium.

If Veraguas wins, there will be a four-way tie between Los Santos, Chiriquí Occidente and Panamá Metro with a 7-9 record, according to the Fedebeis regulations, in this case the domino rule would be sought in matches between them to define the positions and draw the classifieds and assemble the keys for the next round of the tournament. 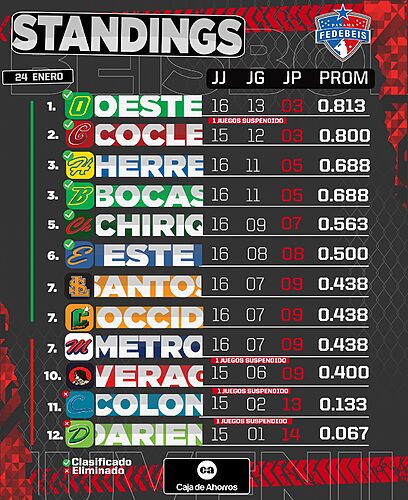 Dr. Eleno Arévalos, head of epidemiology of the VII Sanitary

The president will appear virtually before the international organization to

Abinader returns to the country from Argentina

President Louis Abinader returned this Wednesday morning from his trip

The National Police of Panama informs that on the night of this Tuesday, January 24, units