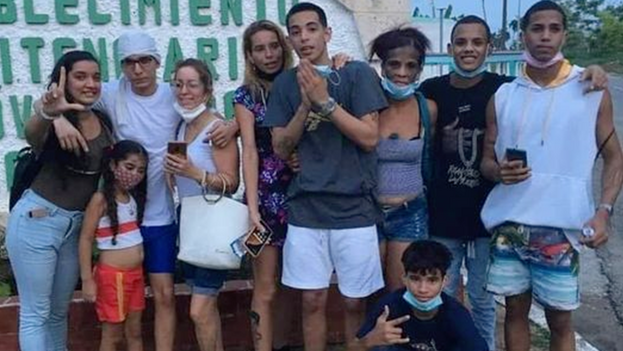 At least five young people who were tried for the July 11 protests in Havana were released after a cassation trial held this Friday at the Diez de Octubre Municipal Court in Havana. Among those released are Rowland Jesús Castillo and Lázaro Noel Urgellés Fajardo, who had been sentenced to 18 and 14 years in prison.

They join the released Kendry Miranda Cárdenas, sentenced to 19 years in prison and Brandon David Becerra Curbelo, who received a 13-year prison sentence. All of them participated in the protest in the vicinity of the Toyo corner in the Havana municipality of Diez de Octubre.

Lauren Martínez Ibáñez, 18, who had been sentenced to the same amount of time in prison, was also released from that group.

Activist Salomé García Bacallao detailed in a Facebook post that both Becerra Curbelo and Urgellés Fajardo had their precautionary measure changed from being interned in a penitentiary center to serving house arrest, while Castillo Castro and Miranda Cárdenas will have to spend the rest of their sentences in a labor camp.

By announcing the cassation trial this Friday, the Justice 11J platform alerted that the modifications “are not final sentences as long as a document has not been issued that closes the criminal process.” He also insisted that “the releases related to possible modifications of non-custodial sentences are not definitive, but only temporary.”

“Do not spread, within civil society and families, false expectations that lead to the consolidation of a benevolent image of the State”

The platform reported that five young protesters from La Güinera were also released, due to a change in sanction after a cassation trial, although “the sentences have not yet been issued.” They are Eloy Bárbaro Cardoso Pedroso and Juan Yanier Antomarchi Nuñez, both 18 years old and sentenced to 8 years in prison each.

Justice 11J expressed its concern about the lack of knowledge of “what will be the final sanctions that must be complied with” by the young people who have been released in recent days. Among them are also Andy Garcia Lorenzo and four more protesters from Villa Clara and another five in Havana, including Jonathan Torres Farrat and Eloy Bárbaro Cardoso.

Regarding the actions of the regime with the latest releases, the platform insisted that “false expectations not be spread within civil society and families that give rise to the consolidation of a benevolent image of the State” in relation to the release of the 11J demonstrators, since these decisions do not point “to the achievement of massive changes in sanctions or mass releases”.

“Even less is there a shift towards the granting of dismissals and acquittals, the only valid ways to solve the irreparable damage to the Cuban people by the State, which has not yet taken criminal or administrative measures against the repressive forces, which caused the confrontations in the protests,” he insisted.

At least five young people who were tried for the

The best of the week in Expansion. Add more avocado to my flautas!

By the way, speaking of commitments with the SAT. We

This Thursday, June 2, the Chamber of Senators will deal

The best of the week in Expansion. Add more avocado to my flautas!

China donates 100,000 dollars to Cuba for the repairs of the Saratoga hotel

(EFE).- The Government of China delivered this Friday to Cuba a donation of 100,000 dollars to

After losing the flavor, the "Ice Cream Cathedral" in Cuba lose the queues

Coppelia, the “Cathedral of Ice Cream” in Cuba, in the heart of Havana’s Vedado, has always

A new fuel crisis looms over the country, judging by the long queues at numerous service

Bahamas returns to the Island a group of 44 Cubans, 35 of them rafters

The Government of the Bahamas has repatriated 141 Cubans so far this year. The last ones,