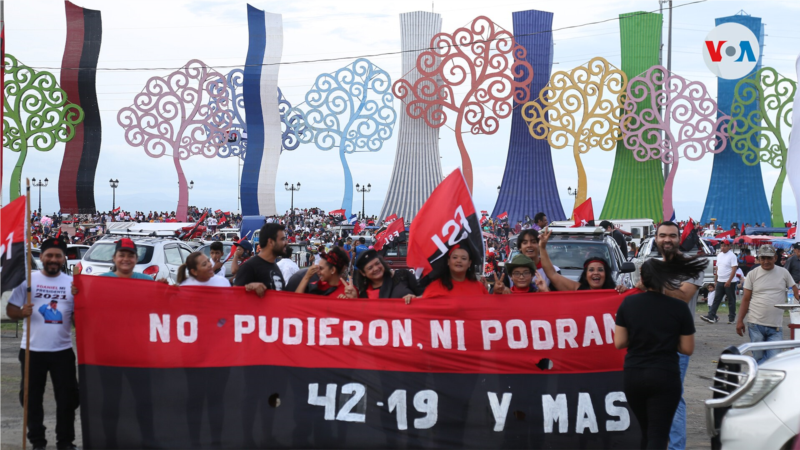 The government of Daniel Ortega and his wife, Vice President Rosario Murillo, have announced a group of activities to celebrate the 43rd anniversary of the Sandinista revolution, on July 19, the date that marked the overthrow of the Anastasio Somoza dictatorship.

The government decreed a mandatory national holiday to commemorate the event.

This occurs at a time when the allies of the Managua government are fewer and fewer. According to experts consulted, a part of the Latin American left has even classified as “shameful” the actions that take place in the last years of the presidential couple’s mandate.

In recent years, the annual celebration has been sparsely attended and has taken place with few militants in a Managua plaza heavily guarded by police.

Other governments, such as those of Cuba and Venezuela, usually send representatives to the commemorations or send messages of congratulations and support to the Ortega government every year.

Part of the left is not welcome

Luciana Chavarría, deputy of Argentina for the Socialist Workers Movement recently tried to enter Nicaragua -unsuccessfully- to corroborate the situation of political prisoners, among them important leaders of the left, such as former guerrilla Dora María Téllez. It was not possible, according to the complaints, because the area was militarized, preventing access.

Along with her, a group of deputies and leftist activists were also deployed who said that the president was “everything except this tendency”, in reference to leftist ideology.

Chavarría assures that regardless of not having been able to enter the country, they are carrying out “an entire task of documenting the stories and testimonies not only of prisoners, but also of released prisoners who suffer forced exile.”

The leftist leader points out that “in Nicaragua there is one of the most sinister dictatorships in Latin America, which persecutes, tortures and murders and does business for themselves, it has nothing to do with the left.”

“Ortega presents himself as a socialist, we who are socialist militants who ask for social rights for all and democracy, we have the authority to say that what is lived in Nicaragua has nothing to do with being leftist, anti-imperialist or socialist,” the deputy said. .

Vice President Murillo, sanctioned by the United States He indicated this week in his daily presentation that “he will celebrate times of victory” and that day “our heroes will be venerated to inspire us more and more,” in reference to Sandinista militants.

Fewer and fewer guests participate in the celebration

Murillo did not disclose whether they plan to celebrate the anniversary in the so-called Plaza de la Fe in Managua, nor are they planning a public rally like those organized before the COVID-19 pandemic. He also did not report on country delegations that would attend the event.

The current government of Nicaragua keeps behind bars important Sandinista dissidents, such as former guerrilla Dora María Téllez and Victor Hugo Tinoco, another former partner of Ortega, who has also been criticized after the death in prison of Hugo Torresanother important former guerrilla.

“All those who are imprisoned have done so with fabricated charges, with trials behind closed doors and without the minimum guarantees, nothing is respected. Those who are in jail, their only crime was expressing themselves and mobilizing,” left-wing deputy Luciana Chavarría said in this regard.

But even the leftist governments that have recently come to power have distanced themselves from Ortega, including Chile’s President Gabriel Boric in Chile and Colombia’s President-elect Gustavo Petro, who have separately called for the release of the political prisoners in Nicaragua.

In September 2021, Boric expressed his support and solidarity with the Sandinista dissident and former vice president in the 1980s, Sergio Ramírez, after an arrest warrant was issued against him.

“My solidarity with Sergio Ramírez, writer and social fighter who is currently persecuted by the Ortega regime in Nicaragua. From Chile we tell all those who are being repressed and intimidated that they are not alone,” Boric wrote on Twitter in September 2021.

The elected president of Colombia, Gustavo Petro, said after winning the presidency weeks ago to the Colombian magazine Changethat those who are imprisoned in Nicaragua “are the ones who made the revolution against Somoza.”

“Those who are imprisoned in Nicaragua, and here I am once again in the 11-yard shirt, are the ones who made the revolution against Somoza (…) And why? Well, because there are drifts that are no longer strictly towards the democracy and that must be avoided,” underlined Petro, who is on the left.

Supplies are lacking in IPS, but they will spend 1,000 million on plane tickets

Congress: The agenda is expanded to include a project that changes the name of the MIMP to the Ministry of the Family

The Board of Spokespersons of the Congress of the Republic

They seek inclusion of disabled people in the DR

In order to promote the inclusion of people with disabilities

Supplies are lacking in IPS, but they will spend 1,000 million on plane tickets

The Archdiocesan Sanctuary of Our Lord of Esquipulas, in Carazo, reported that the Ortega Police ordered

At a preliminary hearing, the judge Yolanda Fletes Canoa specialist in violence from Managua, admitted the

Susana López, mother of Gerald Vásquez, demanded that Daniel Ortega’s regime be held “responsible” for the