On December 23, one day before Christmas, the Bolivian authorities required the presentation of the anticovid vaccination card with the complete scheme to enter places where crowds are generated, including markets, public institutions and educational centers, or to travel within the country.

Supreme Decree 4641 establishes in its article 1: “a) Implement the Vaccination Card against COVID-19 throughout the national territory, as the official document certified by the Ministry of Health and Sports, which certifies that a person was vaccinated in the Plurinational State of Bolivia.

You can also read: The Ombudsman’s Office censors anti-vaccine violence against journalists

The newly vaccinated will accept the card with the registration of the first dose, with the commitment to complete the scheme when appropriate, he indicated.

Those who “exercise their right not to be vaccinated” must present negative PCR tests with a maximum age of 48 hours for travel or entering crowded places, Auza specified.

In addition, public officials must present their immunization certificates at the Human Resources offices of their respective agencies and if they do not want to be vaccinated, they will have to show a negative PCR test weekly, added the authority.

From this announcement, on the one hand, there were massive crowds in vaccination centers throughout the country with people wanting to be immunized, and on the other, responses rejecting the measure in different sectors and contexts.

Demonstrations in the main cities were accompanied by an intense debate on social networks that highlighted the divergent positions that exist in Bolivia regarding vaccines against Covid 19.

Opposing positions were raised among those who defended the obligation pointing out that it was a matter of public health and on the other hand, those who criticized the measure alluding that a personal decision was violated. For this reason, the word “freedom” appeared among the terms used in the debate.

Despite the successful result of registering almost half a million people vaccinated in the first days of January (in December immunization registered only between 2,000 and 3,000 people daily), the card requirement was postponed.

The controversial determination to require a vaccination card from Bolivian citizens ended in the victory of those who oppose vaccination being required. The Ministry of Health reported this Wednesday that the Government decided to suspend the requirement for the vaccination card against Covid-19 and the negative PCR test for the duration of the declaration of a health emergency.

According to the authorities, once the declaration is completed, the card requirement will be resumed, but not for entry to markets, supermarkets, procedures, pharmacies, health services, school enrollment, military and pre-military service recruitment, police services and interprovincial transportation. .

Below you can see the breakdown of tweets per day:

As can be seen, the issue generated movement on networks, especially in the first days of January when the requirement began to be applied. After the easing, the topic was declining in interest.

The most retweeted tweet within the analyzed range was from an account that promotes access to open data on Covid-19 and immunization. The publication made reference to the fact that the vice president, David Choquehuanca, was not vaccinated despite the fact that the vaccines arrived in the country almost a year ago. This issue generated media pressure, to the point that the authority announced that he would be vaccinated in January and did so on the first Monday of the year.

Among the most commented tweets are those who opposed the determination of the obligation, pointing out that it was an “attack against individual freedom”. 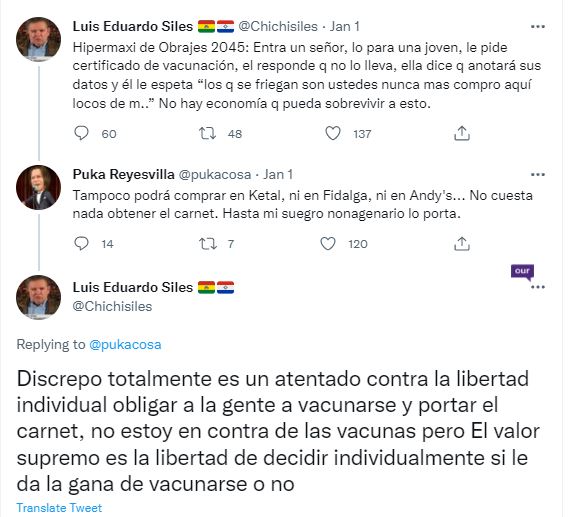 The former candidate for president, Virginio Lema, was one of the most influential in the debate. 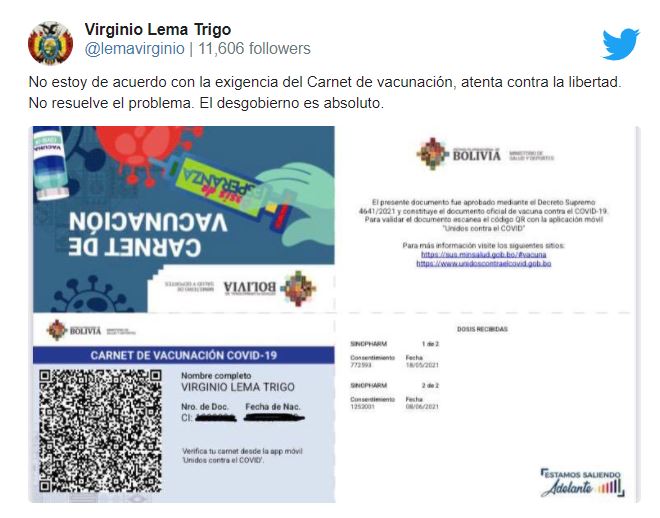 Lema disagreed with the obligation and in this context, spread false information assuring that the Ministry of Health recognized a “non-vaccinated” card. If you want to know more you can read:The “unvaccinated” card is not legal as Virginio Lema stated

From the first tweets with the topic of vaccination and freedom:

ANEP will not require quarantines in educational centers

The Public Health and Education authorities agreed, this Tuesday the

Because “they highlight the bad”, in Valledupar they are “angry” about the Netflix documentary on Diomedes Díaz

The UN failed to prevent the Russian invasion of Ukrainesaid

Blas Llano meets with Miguel Prieto with a view to 2023

Blas Llano, a national senator for the PLRA, and Miguel

With the team’s midfielder, Flamengo presents a women’s team for 2022

A woman with a merchant occupation, identified as Marisol P., 39, she was saved from death

NATO chief says war in Ukraine could "last for months, even years"

How a tip in Germany brought down Hydra, the impenetrable dark web criminal group

B.K.A.German police say shutting down the infamous site took months of cyber investigation. “It gave us