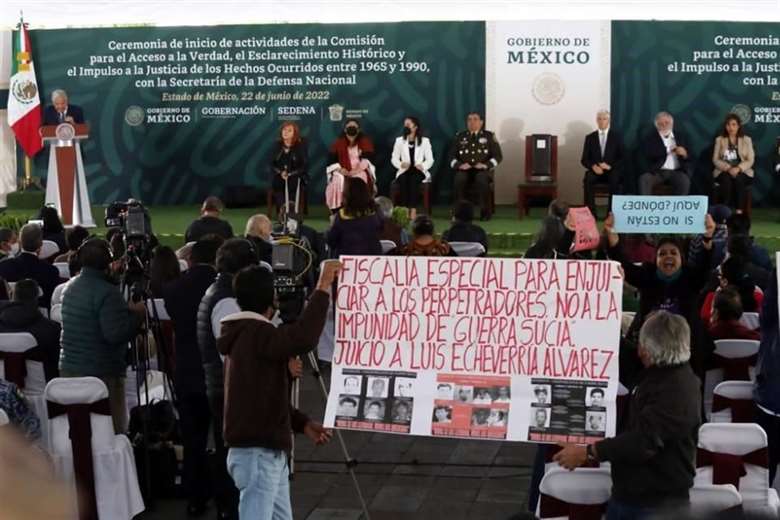 Victims of the so-called Dirty War against leftist movements between 1965 and 1990, they entered for the first time to the main military camp in Mexico City to “identify spaces in which serious violations were allegedly committed”.

“We found credible evidence that Military Camp No. 1 was the scene of crimes against humanity and was the scene of very serious human rights violations,” said at a press conference David Fernandez, Truth Commission memberwho accompanied the 61 survivors and relatives of victims.

They entered Military Camp 1 for three days on the orders of President Andrés Manuel López Obrador.

The Truth Commission was created in October 2021 and seeks to clarify abuses committed during that period by the Army and other security agencies.

“We recognized (in that military camp) two installations and indications” that coincide with the complaints of survivors that “allow to initiate an investigation process to greater depth and of greater extension”, continued Fernández.

Erasmo Cabañas, who was detained in this military camp twice between 1976 and 1977, maintained that some of those who disappeared from the Dirty War were “tortured and killed” there.

“Tell us where the clandestine graves are (in Military Camp No.1) because it is important to know where our relatives are,” said Erasmo Cabins.

He added that he did not have access to the basement where he himself was imprisoned.

“In particular, I was looking for a subway because they had me there (…) we asked the Sedena (Secretariat of Defense) to open up more to support this process,” said the relative of guerrilla leader Lucio Cabañas, executed by the military in 1974.

As in other Latin American countries, the State carried out practices that violated human rights such as torture, kidnapping, extrajudicial execution and forced disappearance, according to historians.

In its eagerness to clarify these facts, the government opened the official archives of that time in June.

With a good performance, Brazil defeated Ghana 3-0, on the

The “Amazon manager” did not contact him and they are not offering him “the dream job” either: Eye they knock him down on WhatsApp

In Colombia and other Latin American countries, these types of

‘Riverdale’ actor who murdered his mother sentenced to life in prison

What did Luis Arce say to Santa Cruz? These are 7 sentences from his speech at the honor session