Instead of throwing away fresh milk, the farmers of Aplao in the province of Catilla they donated at least 600 liters from product to Police to take care of the distribution between citizens of different areas.

The troops of the place transferred the milk to the sectors considered vulnerable such as Alto La Barranca, Cosos, Acoyamong others, to distribute among the neighbors, who gladly received the fresh milk.

Both the police and the residents appreciated the gesture. However, It is unknown how much longer this action will take place.considering that logistical material is required for the support.

The Ranchers from Castilla and from other provinces such as Caylloma, Condesuyos give away milk, several days ago, initially due to road blockades and later as a result of the fire at the Gloria plant, located in Majes.

The company Gloria informed that there is still no date to restore the activity of the company, because the damage to the infrastructure, storage vehicles, laboratory, among others, were rendered useless. 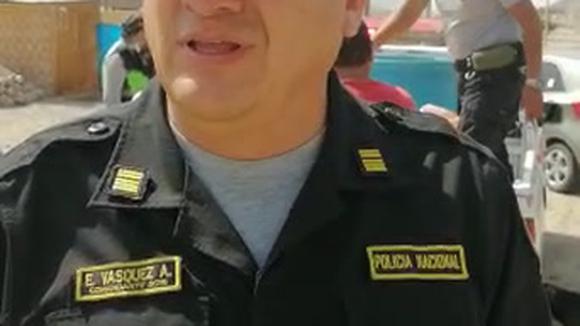 Colombian driving license will be valid in Argentina and Portugal

The Colombian driving license will be valid in Argentina and

MADRID, Spain.- A boat with 253 Haitians trying to reach

Percy Medina: “Political reforms are important, but they are not a magic wand”

In this interview, the head of the Mission for Peru of Idea International, Percy Medina, explains

“Save my daughters”, the desperate request of a mother before dying in an accident in Jauja

“Save my daughters, don’t worry about me,” were her last words before dying after suffering a

Walter Ayala: “If I have seen or heard something, I will tell the prosecutor”

The Public Ministry, together with the High Complexity Crime Investigation Division (Diviac) of the National Police