Five (business) days remain for the president peter castle to keep his word and observe the autograph of the law that proposes to modify the composition of the Board of Directors of the Sunedu, which was approved by Congress on May 4. Despite the fact that the president promised that he would speak out “in defense of the rights of students”, he remains silent. As if that were not enough, the owner of Peru Libre, Vladimir Cerrón, warned him that observing it “would be a serious mistake”, leaving the government’s position on this issue unclear. The deadline is Friday, May 27.

While the future of the disputed norm that threatens the autonomy of Sunedu remains in abeyance, in the Congressional Education Commissiondirected by Renovación Popular, other initiatives are being cooked up that seek to modify more articles in Law No. 30220, University Law.

These range from proposals to give greater flexibility in hiring university teachers; provide second opportunities to non-licensed institutions and create more than five new universities such as the Intercultural Aymara University of Peru, promoted by pro-government supporters and pro-government supporters, including some of the accused ‘Niños’, such as Luis Flores, Raúl Doroteo, darwin espinoza and Elvis Vergara.

The set of proposals that Parliament is preparing would have a direct impact on the university reform, which has been weakened – by the extreme left and the extreme right – at the gates of undertaking its second stage after the licensing of 95 universities nationwide: the license renewal stage .

The model to implement this second phase was approved in September of last year and was scheduled to begin in 2023, with the study houses whose institutional licenses are about to expire.

As specified in the University Law, the “license of the universities is temporary, renewable and necessary for the evolution of the quality of the university service”. This on the basis of four Basic Quality Conditions (CBC), which are strategic management and institutional support; teaching and teaching-learning; research, innovation and artistic-cultural production; and relationship with the university community and the environment.

In the complementary provisions of the autograph that modifies the composition of the Board of Directors of Sunedu, it is specified that the members may “regulate and supervise the Basic Quality Conditions required for the operation of universities”. That is, change the rules of the game in the reform.

LOOK: March for Education: hundreds protested for bills that undermine Sunedu and sex education in schools

For former Minister of Education Idel Vexler, neither Congress nor the Executive should “waste time.” “I do not agree that the composition of the Board of Directors is set in stone, but neither do I agree with returning to a model similar to that of the National Assembly of Rectors (ANR)“, said to Peru21.

He added that midpoints must be sought to reinforce the progress made since 2014. “What is underway and what needs to be strengthened is Sunedu, which has two functions: licensing and supervision of the CBCs. If a balance is made, an important role has been fulfilled by not licensing about 40 private universities and declaring the reorganization of three public ones“, Held.

For the former Minister of Education Daniel Alfaro, the continuity of licensing should not be neglected. “Institutional licensing has an expiration period, depending on the level of compliance with the CBC at the time of evaluation. Then it is necessary to verify, at the end of that period, if those conditions have improved or not.”, he detailed to this newspaper.

He warned that, in the complementary provisions of the autograph in question, the reorganization process of the National System of Evaluation, Accreditation and Certification of Educational Quality (Sineace), which has been paralyzed since 2015, is considered complete.Other projects have sought to give greater reinforcement to this topic (…). In the autograph, in addition, they remove from the plane the licensing of study programs in faculties”, warned the also leader of Education of Bicentennial Proposals. 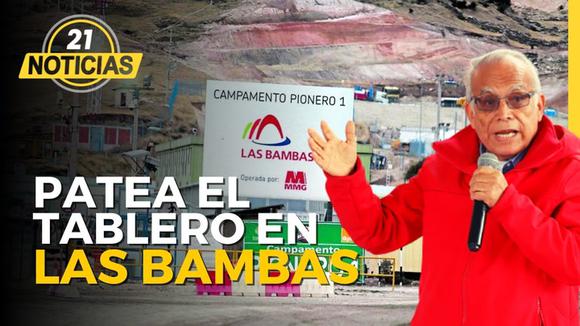 Governor of Apurímac: “If the Premier cannot, we will request the presence of the President of the Republic” In addition, the Minister of Energy and Mines defends officials from Peru Libre: “We are qualified people” Also, Betssy Chávez proposes psychological and psychiatric tests as requirements to run for Congress. And, the G7 countries are mobilized to help the Ukrainian economy.

Political game would affect the second phase of the university reform

Five (business) days remain for the president peter castle to

The National Police reported the location of 53 people who

Astori proposes that the opposition and the government agree on fundamental issues, because the future can be painful

Danilo Astori gave a message for the 28 years of

They denounce attacks by La Resistencia against directors of state entities

Minister Sánchez on Las Bambas: “The government is self-critical, we did not know how to face this”

The Minister of Foreign Trade and Tourism, Roberto Sánchez, stated this Saturday that the dialogue within

Updated on 05/21/2022 04:36 pm From the Peruvian Chamber of Electronic Commerce (CAPECE) different initiatives are

the congresswoman Norma Yarrowfrom the Avanza País bench, sent a letter to the Secretary of Government