The National Police of Peru (PNP) released a statement making it clear that it was not this institution that required the Executive to impose the mandatory social immobility order in Lima last Tuesday, clarifying that the documents issued “are not binding.”

The Police explained that the protests of the carriers’ unions began on March 28, but worsened on Monday, April 4, when other unions joined, “producing the escalation of the social conflict, acts of vandalism, looting, looting”, among others.

Along these lines, he specified that the Council of Ministers met on Monday “taking notice from Intelligence information (DINI), that on April 5 the situation of violence in Lima and Callao would worsen and worsen.”

Given this, the institution details, it is at the request of the Minister of the Interior, Alfonso Chávarry, that the technical opinion of the Police was required “on the possibility of declaring mandatory social immobilization in Metropolitan Lima and Callao.”

According to the statement, “the Police suggested evaluating the relevance or not of the possibility of ordering compulsory social immobilization to be carried out from 2:00 a.m. to 11:59 p.m. on April 5.”

This “suggestion” was reflected in Report No. 062-2022 of the General Command of the Police, sent to the Executive through another official letter. Both documents, it is emphasized from the police institution, “are not binding.”

Thus, the responsibility for decreeing social immobilization falls strictly on the Government.

“This decree is duly supported and substantiated by official letter 196-2022-CG-PNP sent by the General Commander of the National Police, Vicente Tiburcio,” said the head of the Ministerial Cabinet, Aníbal Torres, this Wednesday. 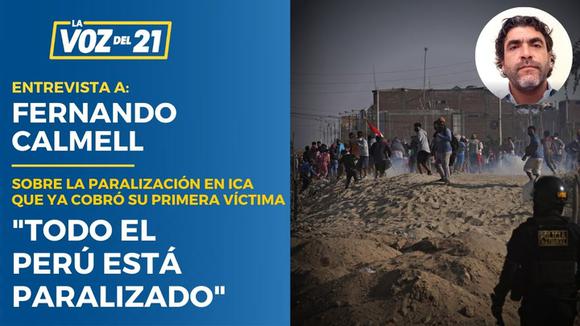 Perú21TV spoke with the director of Mypes Unidas del Perú, Fernando Calmell del Solar, about the national stoppage, but above all the situation that exists today in Ica.

Federico Vera was this Wednesday protagonist, hero and villain in

More moves in the BCN: Ortega saturates the board with former Bancorp delegates

The regime of Daniel Ortega and Rosario Murillo moved three

‘Hand of God’: Maradona’s shirt against England in 1986 auctioned

The shirt worn by Diego Maradona when he scored his

Through a statement released by their networks, the National Police of Peru (PNP) pointed out that

Tremor in Huancavelica: earthquake of magnitude 5.4 shook the city of Huaytará

An earthquake of magnitude 5.4 was recorded at 10:30 p.m. in the city of Huaytará, homonymous

Updated on 04/06/2022 08:23 pm The Peruvian Press Council condemned the violence suffered by at least