The Vice President of Congress, Lady Camones, closed the plenary session. Likewise, she indicated that on the following date, scheduled for Monday, March 14, the admission of the vacancy motion against President Pedro Castillo will be discussed. 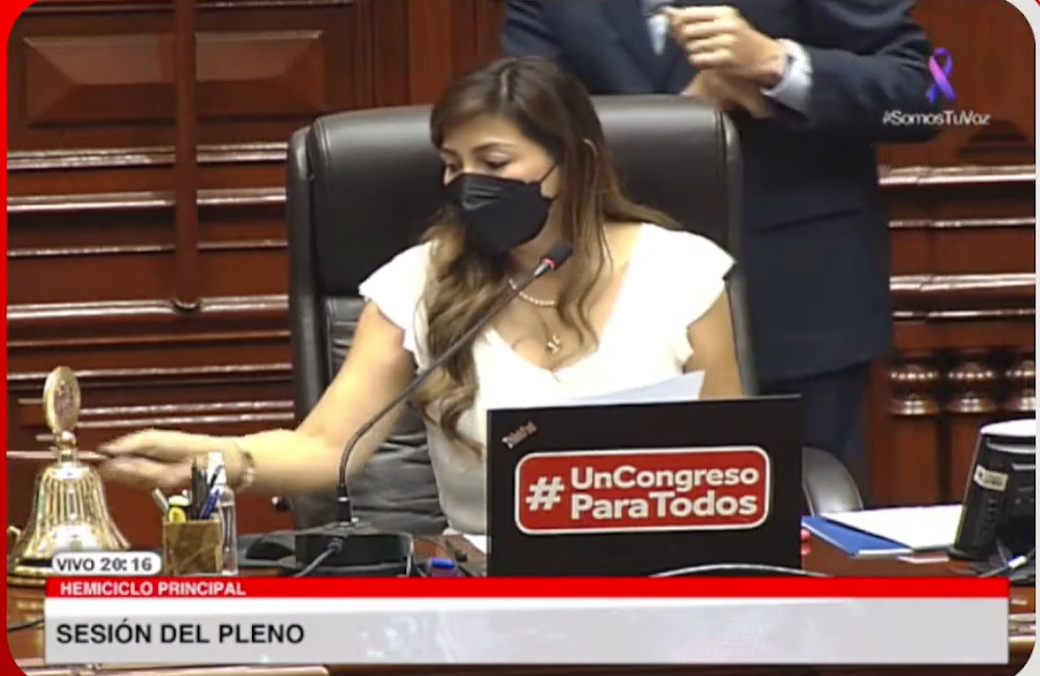 With 104 votes in favor, in the first vote, Congress approved the substitute text of Bill 609, which proposes to establish basic guidelines for the production and industrialization of alpaca fiber and meat. Likewise, the second vote of the same was exonerated. 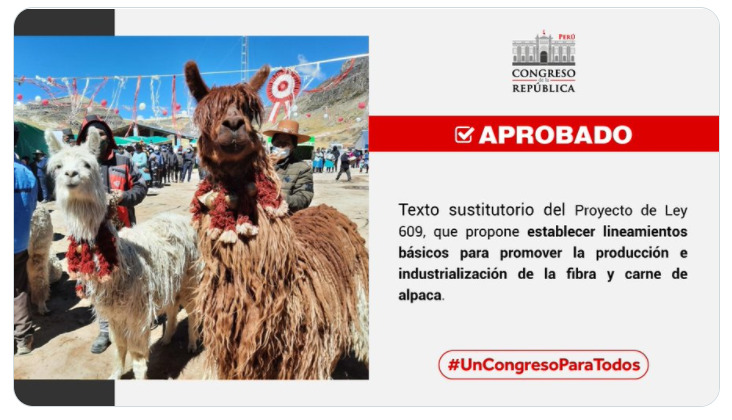 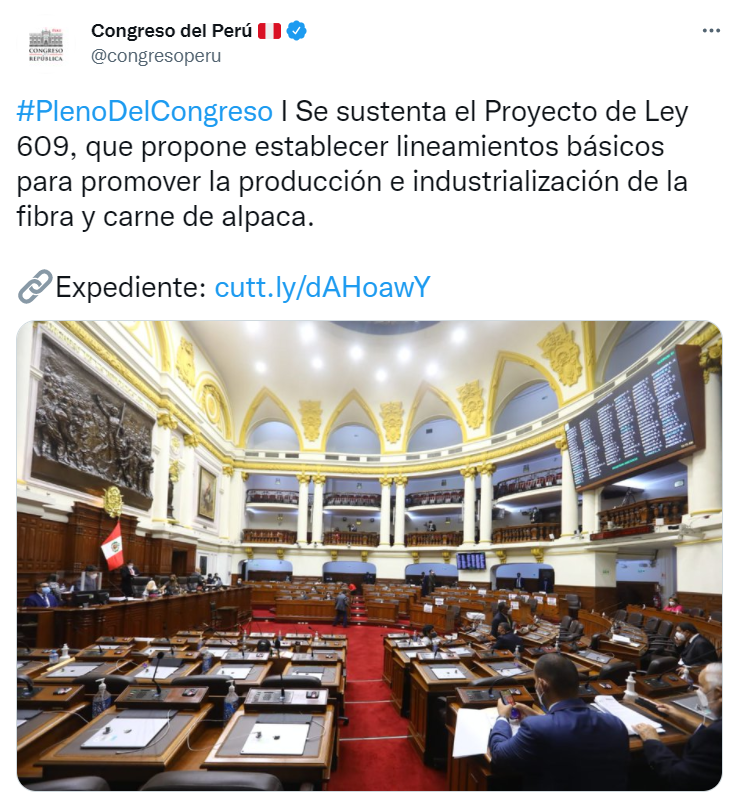 Plenary of Congress approves the substitute text of Bill 259 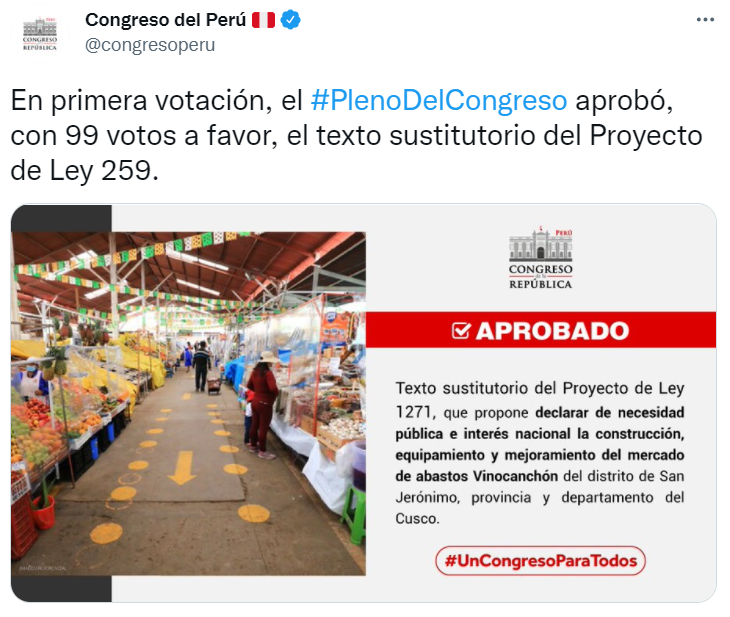 PL 259 is supported, which proposes to declare the construction, equipment and improvement of the Vinocanchón market in Cusco of national interest 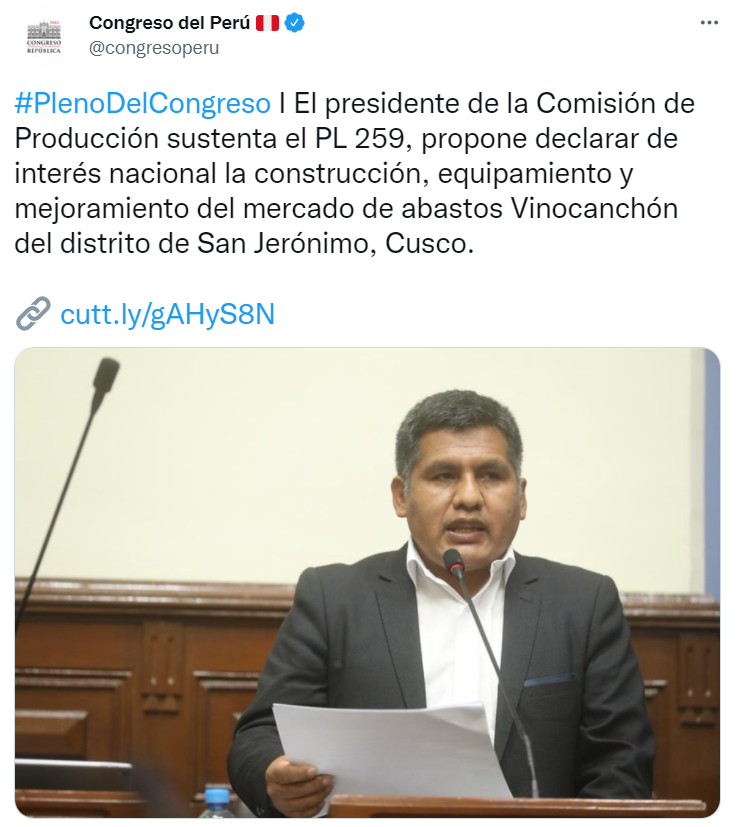 Motion of censure against Minister of Health, Hernán Condori, is withdrawn

The spokesman for Fuerza Popular, Hernando Guerra García, announced the withdrawal of the motion of censure filed against the Minister of Health, Hernán Condori, due to the fact that two interpellation motions were previously approved against the aforementioned official. 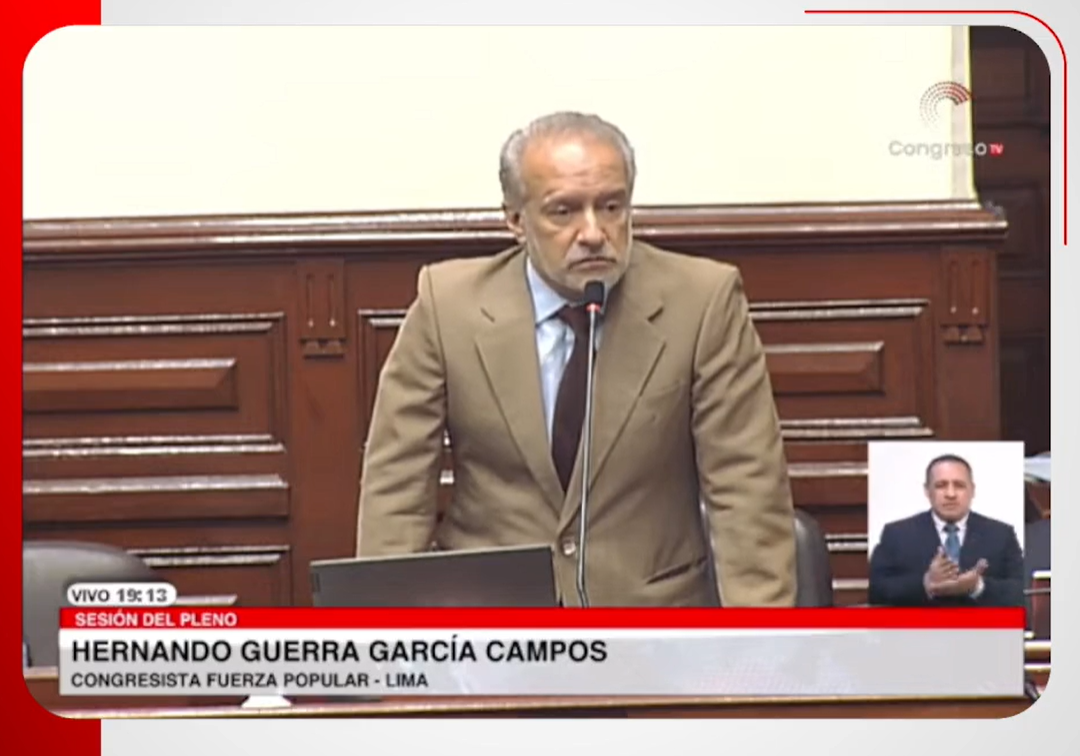 With 103 votes in favor and no abstentions or against, the Plenary voted in favor of Bill 483, which proposes to modify Law 27585, Administrative Simplification Law for pension applications of the National Pension System, regulated by Decree Law 19990.

The PL, in addition, was exonerated from going to the second vote. 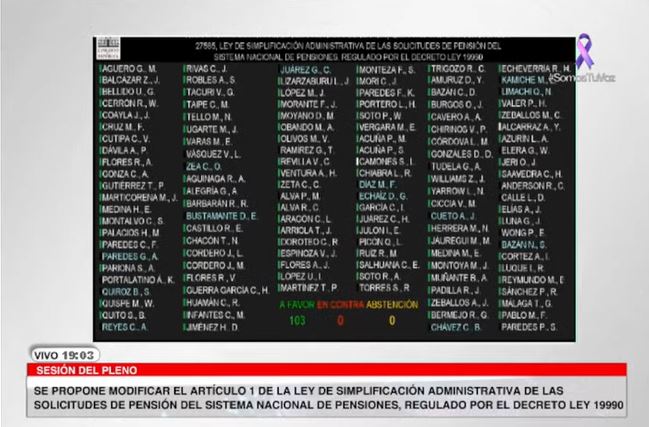 The opinion approved unanimously in the Labor Commission was supported by the president of this working group, Congresswoman Isabel Cortez. 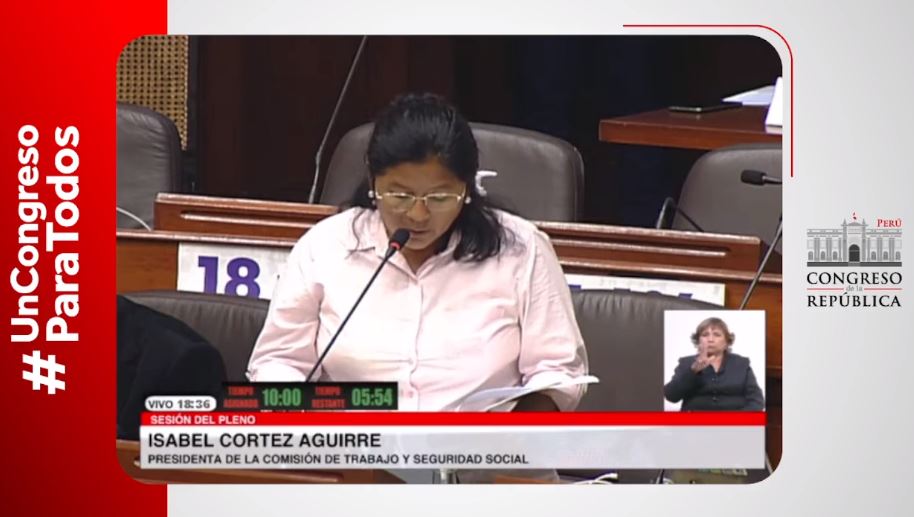 Congress votes in favor of PL to modify articles of DL 1154, which authorizes complementary health services

With 102 votes in favor, 0 against and 1 abstention, the Plenary approved by majority the substitute text of the Health Commission that modifies various articles of Legislative Decree 1154, which authorizes complementary health services.
Likewise, he was exonerated from going to the second vote. 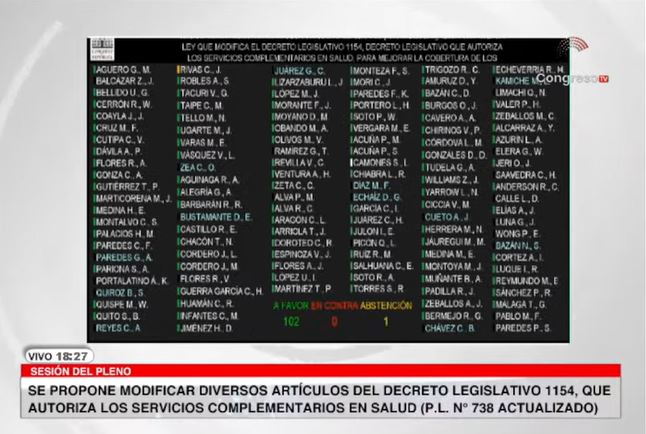 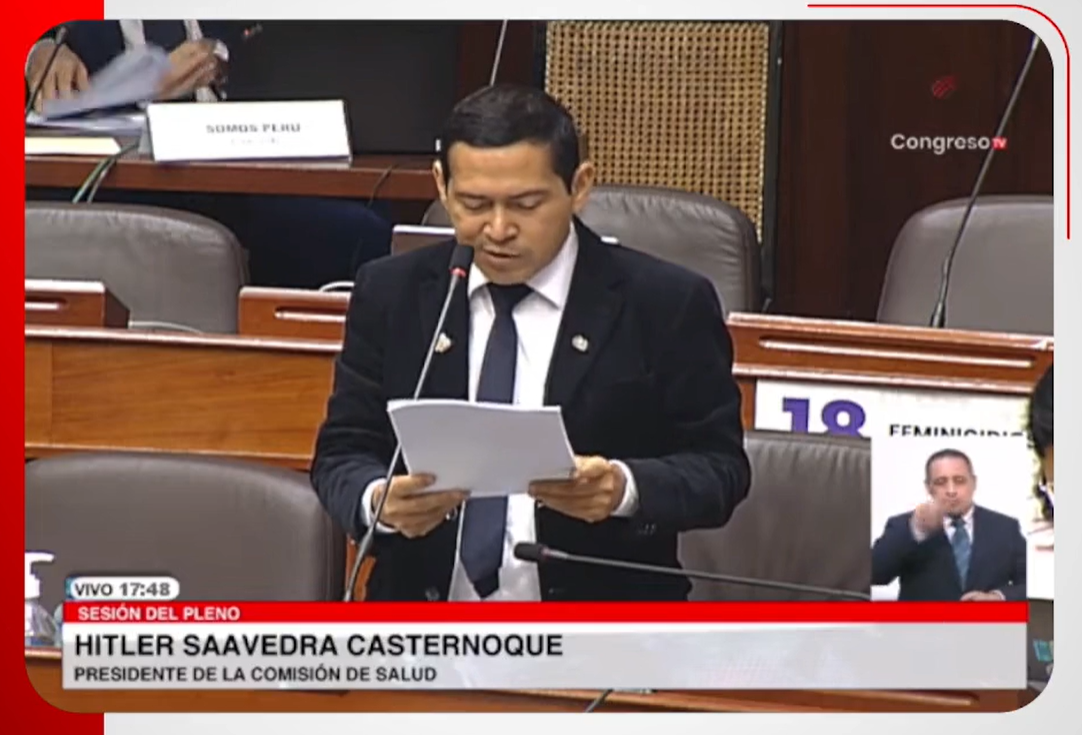 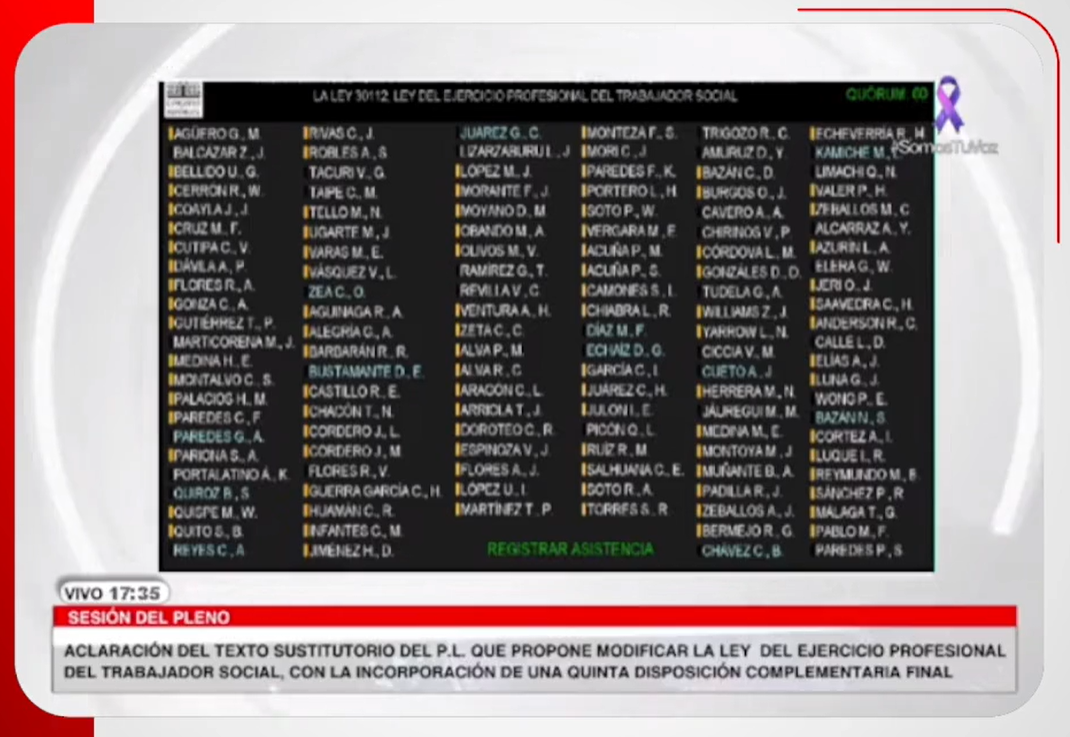 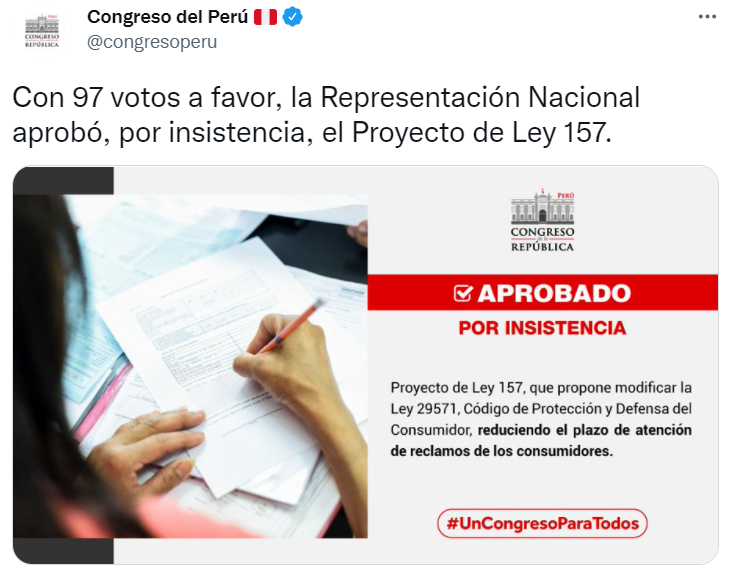 PL 157 is supported, which proposes to modify the Consumer Protection and Defense Code 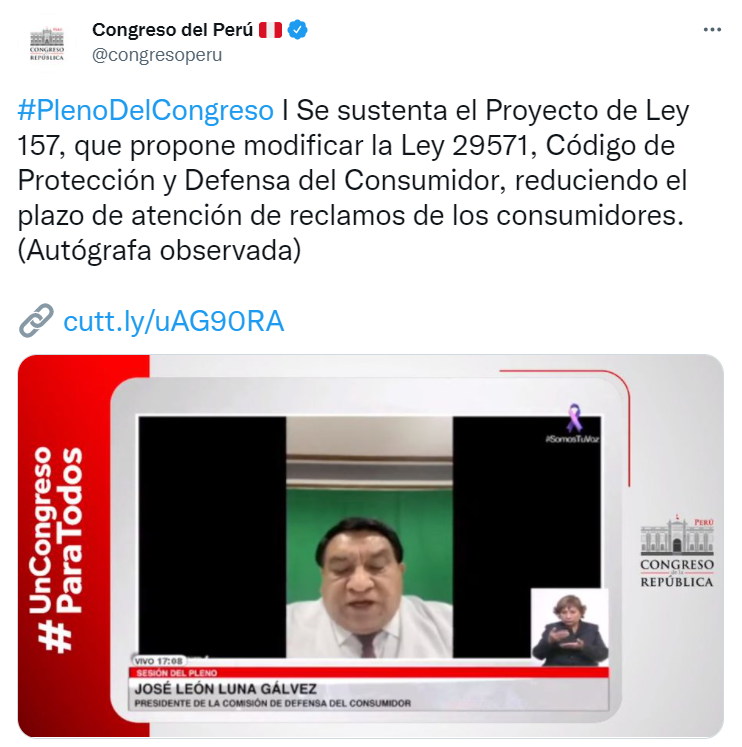 Plenary session is suspended until 4:00 p.m. 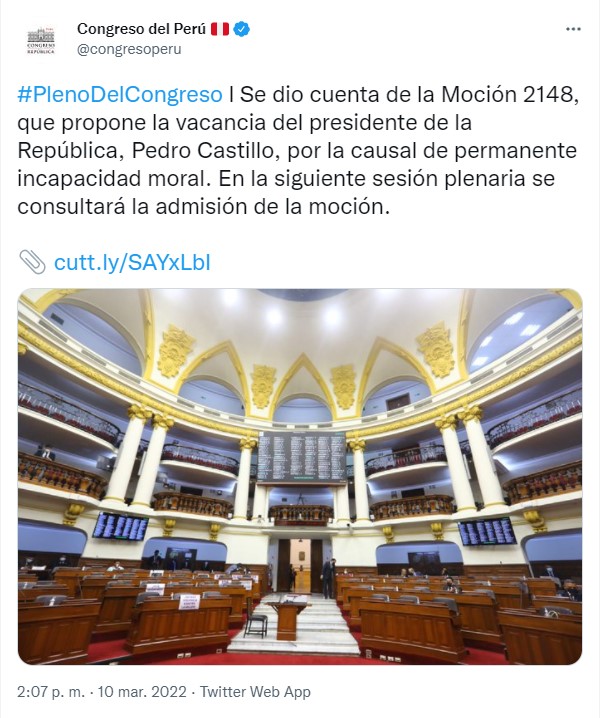 With 82 votes in favor, the Plenary Session of Congress approved the substitute text of Bill No. 31357, on the rules for the development of the 2022 Regional and Municipal Elections in the framework of the fight against COVID-19. He was exonerated from the second vote. 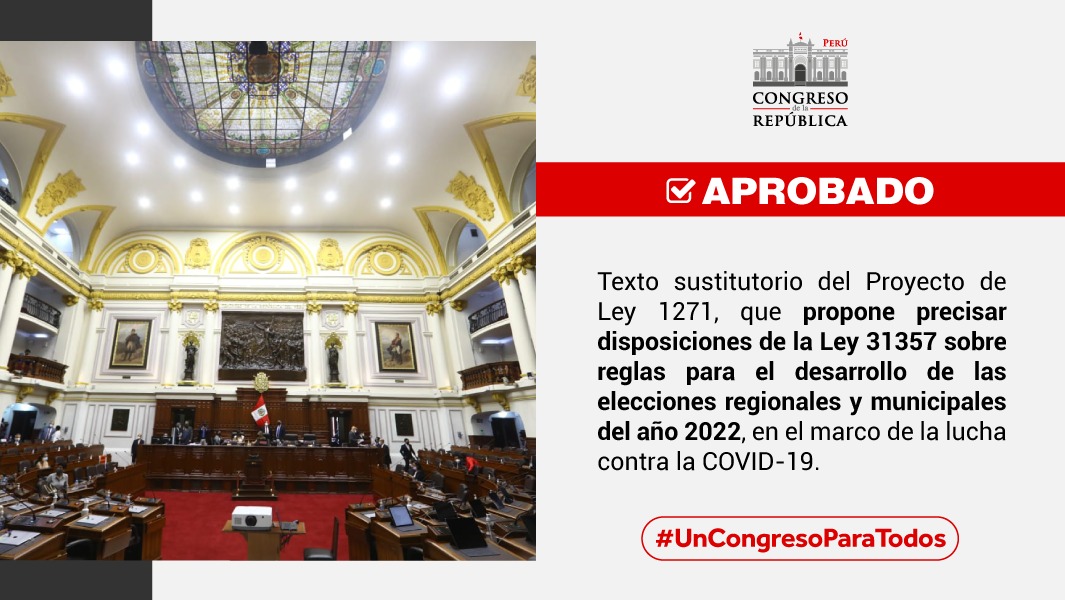 With 109 votes in favor, the plenary session of Congress approved Bill 799, which proposes declaring Cecilia Túpac Amaru and Tomasa Tito Condemayta precursors of Peru’s independence. He was exonerated from a second vote with 106 votes. 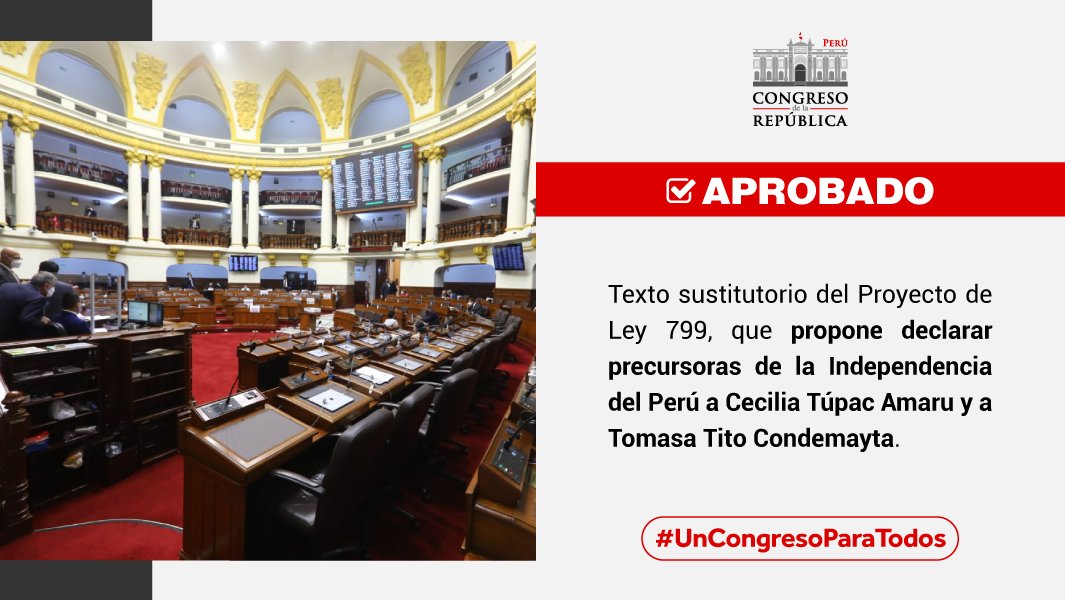 Legislators from different benches debate and give their arguments regarding Bill No. 799, which proposes to declare Cecilia Túpac Amaru and Tomasa Tito Condemayta precursors of Peru’s independence.

The president of the Culture Commission of the Congress, Alex Flores (Free Peru) supports Bill No. 799, which proposes declaring Cecilia Túpac Amaru and Tomasa Tito Condemayta precursors of Peru’s independence. 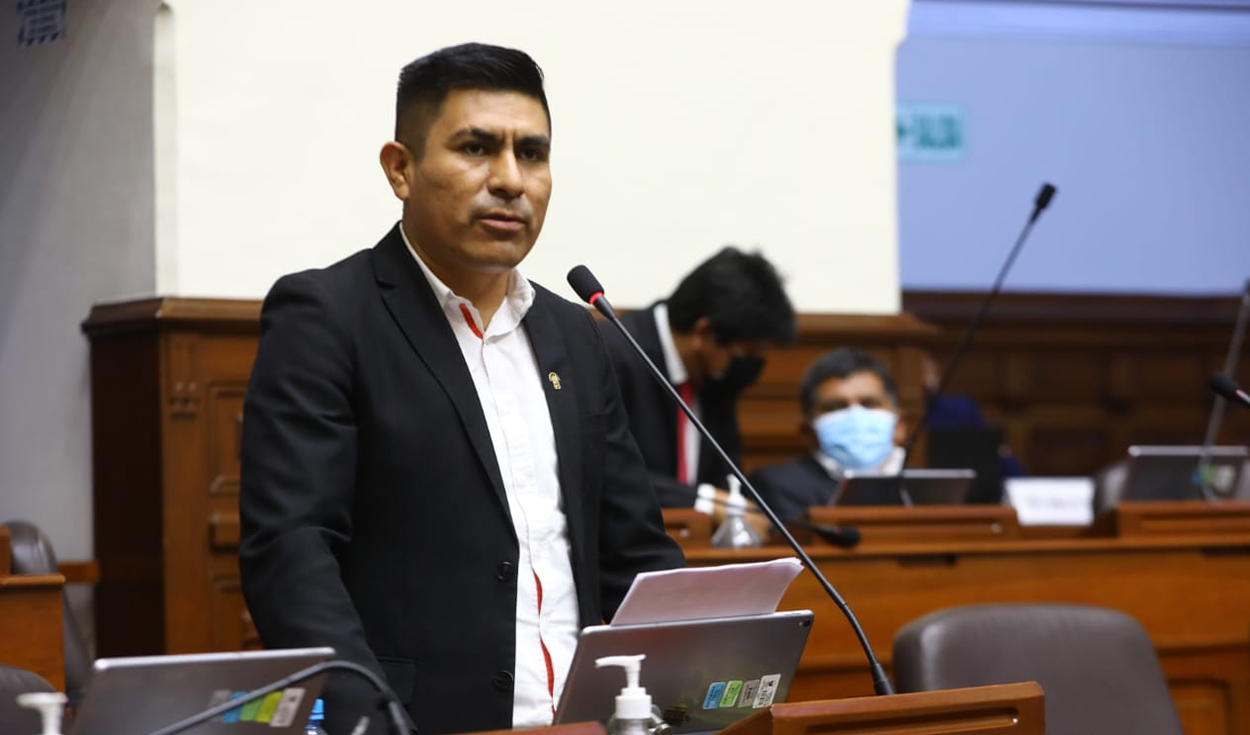 They approve a second motion to question Minister Hernán Condori 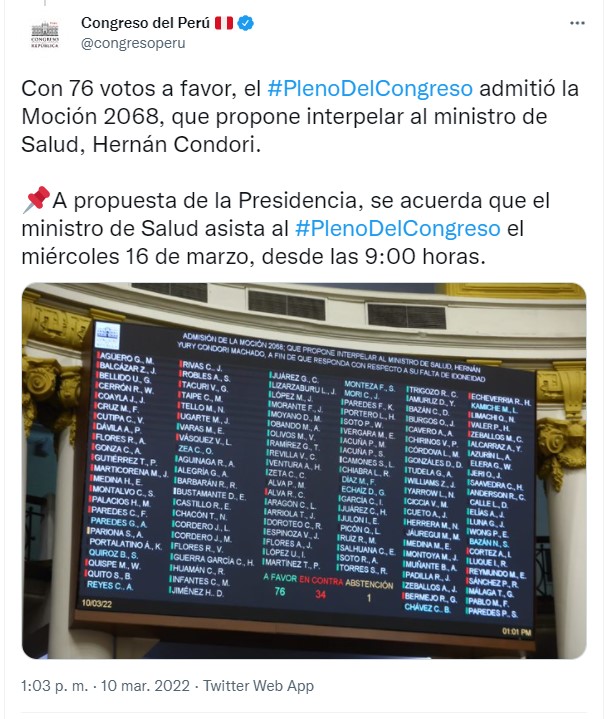 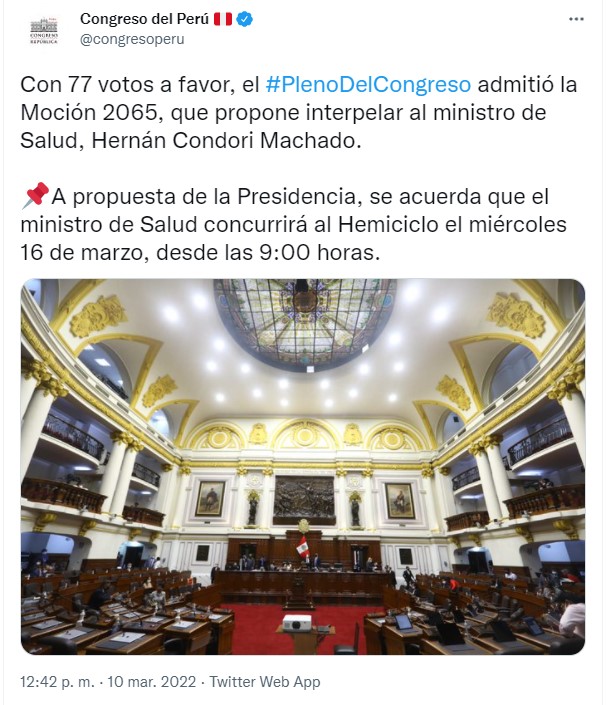 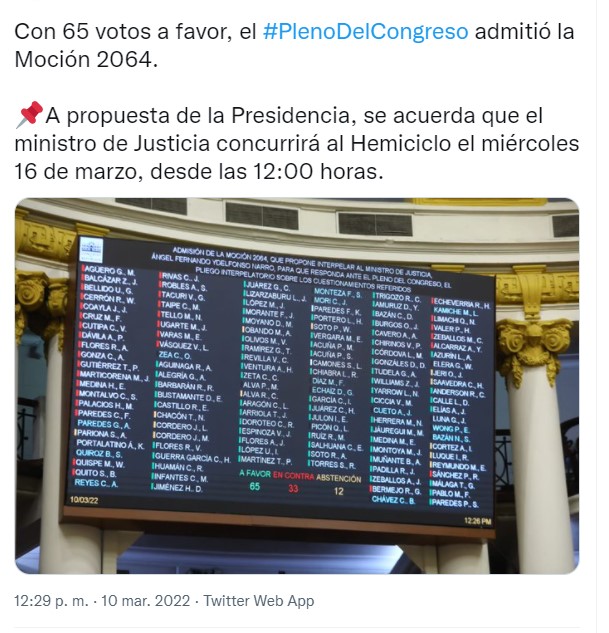 To the vote the admission of the Motion for the Agenda No. 2064, which proposes to question the Minister of Justice, Ángel Ydelfonso Narro, so that he responds to the plenary session the questioning statement on the questions referred to in the motion.

The Plenary Session of Congress decided to move Bill No. 1271 to an intermediate room, which proposes to interpret numeral 4 of the ninth transitory provision of Law 31357 to modify the rules of the 2022 Election process. 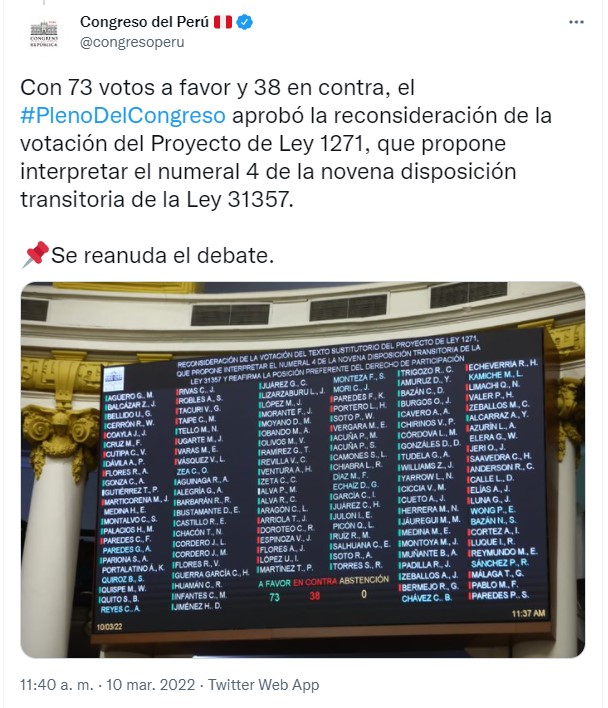 They ask to reconsider the vote for the law that proposes to modify the regulations for the 2022 Elections. Photo: Congress

Legislator Alejandro Muñante from Renovación Popular asked to reconsider the vote on Bill No. 1271, which proposes interpreting number 4 of the ninth transitory provision of Law 31357 to modify the rules of the game in the midst of the 2022 election process. Several legislators set out their positions on this request. 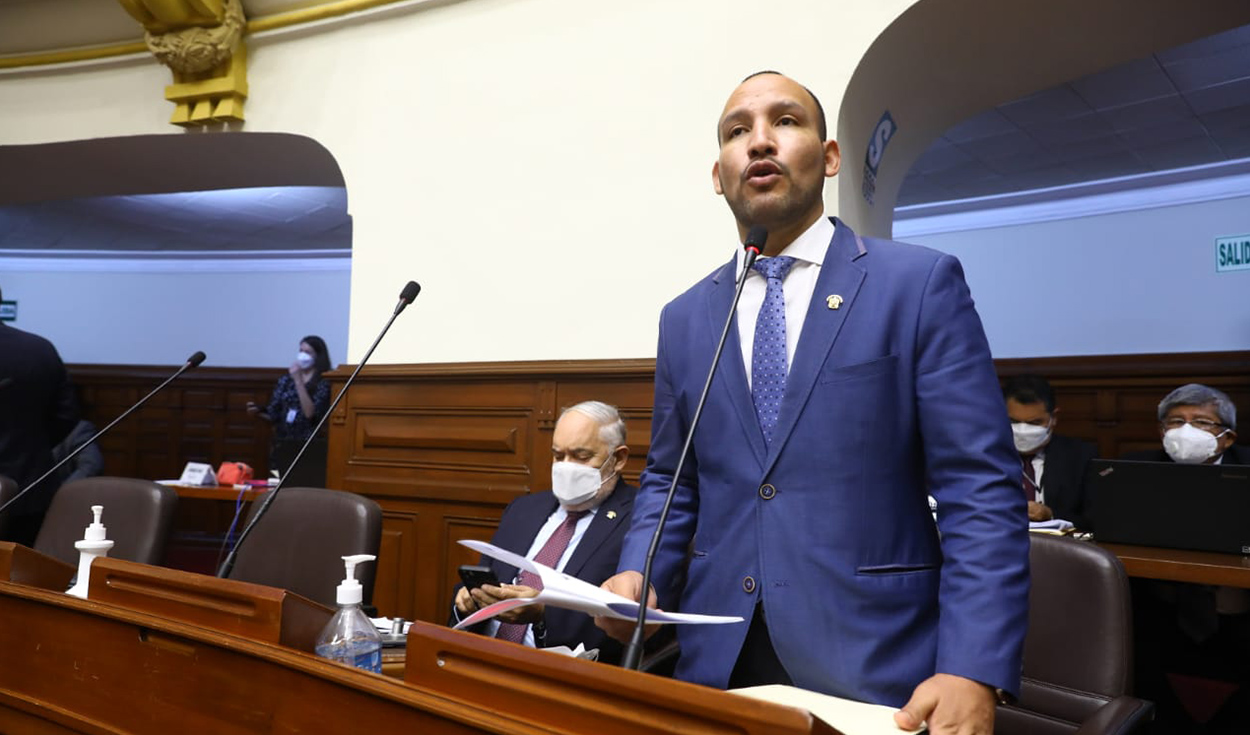 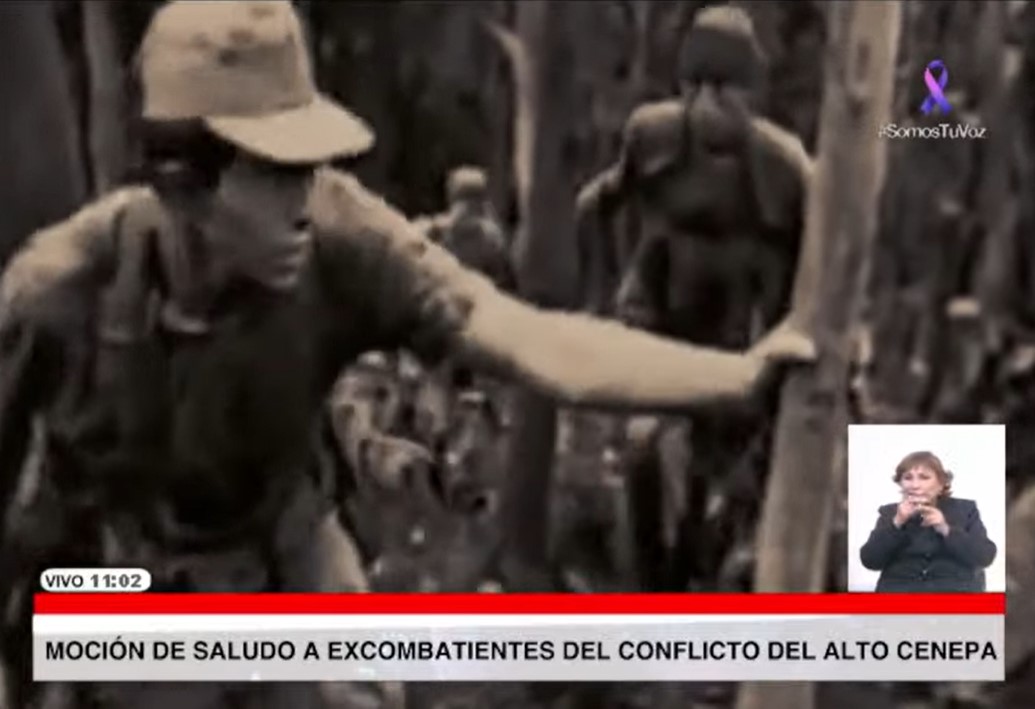 Maricarmen Alva after protests at her home: “They are not going to intimidate me.” Photo: Capture/YouTube 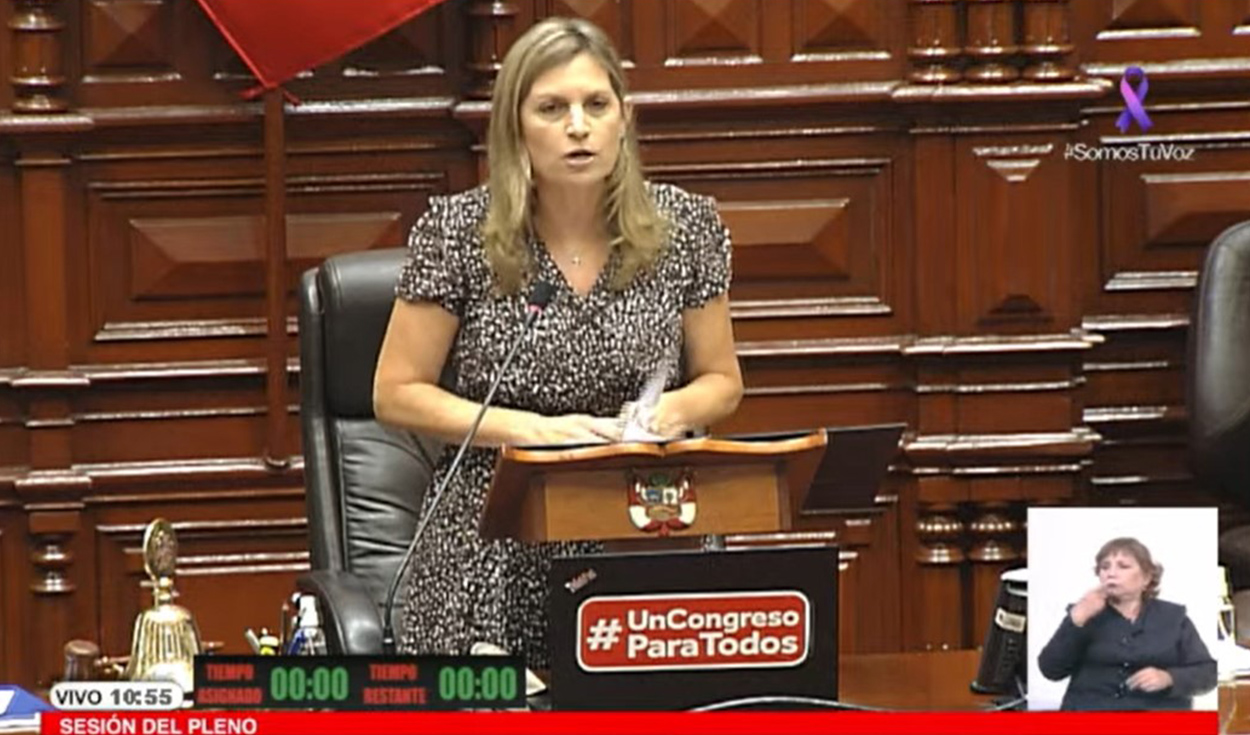 Congressmen show their support for Alva and speak out against violence. Photo: capture/Youtube

Legislators Lady Camones (Alliance for Progress) and Lucinda Vásquez (Free Peru) rejected the attacks against journalists outside Congress. Likewise, the official congressmen Waldemar Cerrón and Guido Bellido did so. The first called for protests in the squares and not in the houses of congressmen. For his part, Bellido pointed out that the attacks and insults have been taking place since the second round. 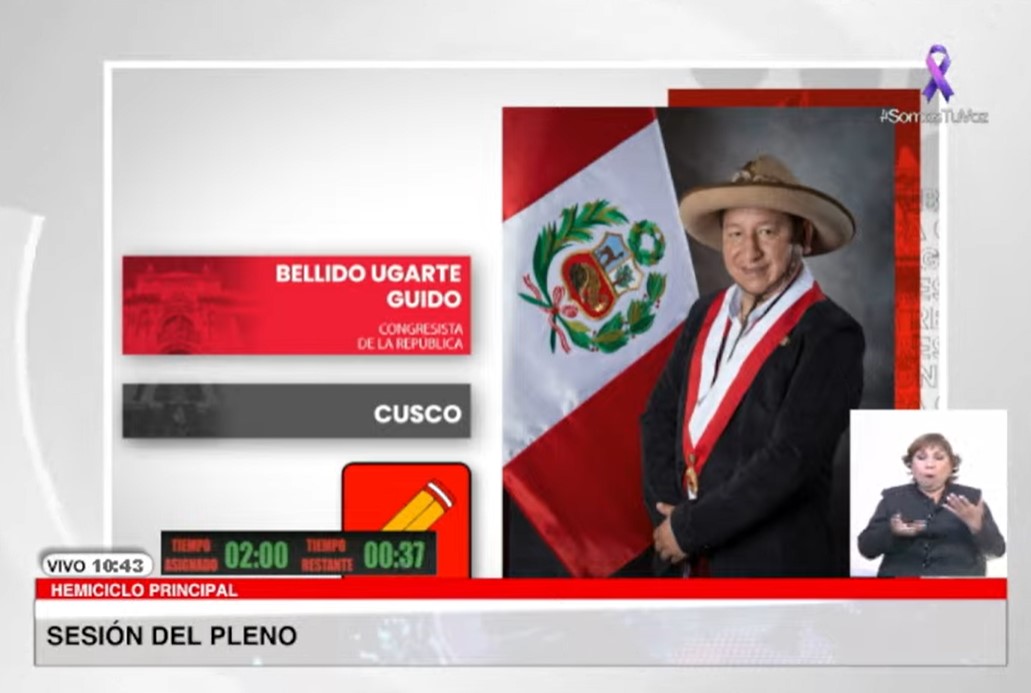 Congresswoman Ruth Luque of Together for Peru (JPP) called for calming acts of violence in politics. She recalled that there are groups like La Resistencia or La Insurgencia that have also provoked acts of violence against those who do not think like them. “You have to collectively reject violence, thinking that violence can come from anywhere,” she said. 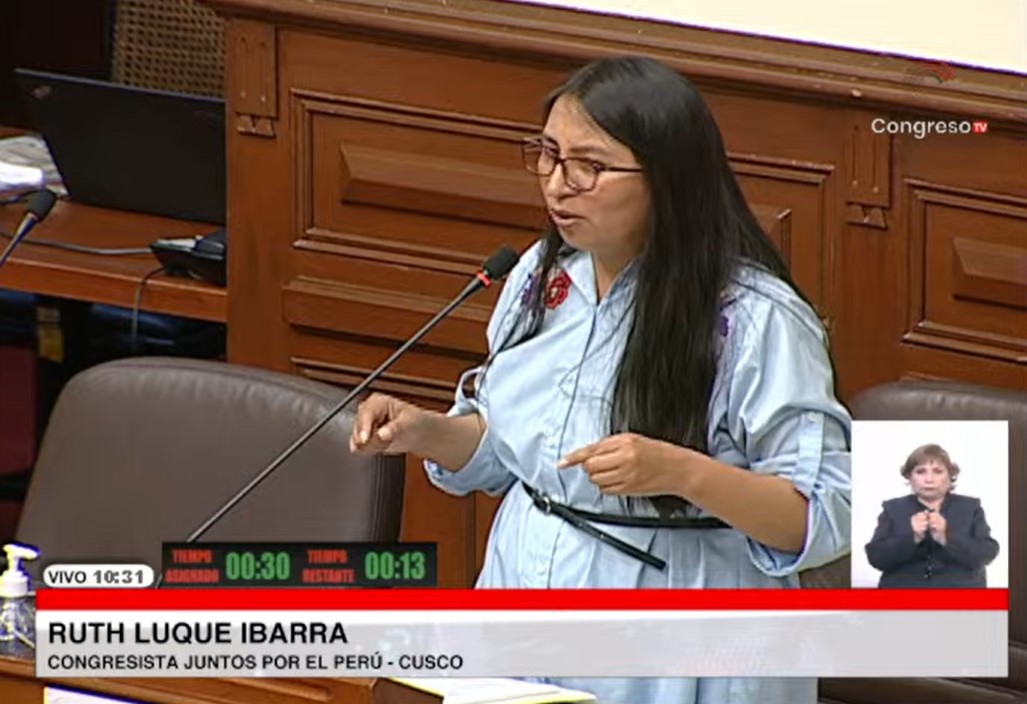 The plenary session of Congress began this Thursday, March 10. Legislator Norma Yarrow of Avanza País expressed her solidarity with the journalists attacked by supporters of Peru Libre on the last Tuesday prior to the vote of confidence in the ministerial cabinet. In addition, she showed her solidarity with María del Carmen Alva, who suffered attacks in her home earlier than hers.

Parliamentarians mark attendance before the start of the Plenary

The head of Congress, María del Carmen Alva, calls the list of legislators for the corresponding quorum before starting the plenary session of Congress. 106 congressmen registered attendance. She clarifies that congressmen who are members of the Oversight Commission are in session, so they are on leave.

The congressman and spokesman for the Fuerza Popular bench, Hernando Guerra García, clarifies that this Thursday he will only notice the vacancy motion against President Pedro Castillo. He pointed out that the goal is for the president to be summoned soon. Likewise, he lamented the withdrawal of the signatures of some legislators in the motion of censure.

Congressman Enrique Wong declares before the start of the Plenary

The second vice president of Congress and congressman Enrique Wong of Podemos Peru clarifies that this Thursday, March 10, only the interpellation motion against the Minister of Health, Hernán Condori, will be seen. According to the congressman, this is done to “respect due process.” “I believe that the Minister of Health should be questioned first,” he told reporters.

Minutes before the start of the plenary session of Congress

The President of the Parliament, María del Carmen Alva, arrived at the Legislative Palace in order to direct this Thursday, March 10, a new session of the Plenary of Congress.

The Plenary of the Congress of the Republic will start a new session this Thursday March 10 from 9.00 am in order to vote the admission to debate of the presidential vacancy motion presented by the Popular Renovation caucus against the President of the Republic, peter castle, less than 48 hours after the question of trust was given to the ministerial cabinet led by Aníbal Torres.

Till the date, this new vacancy motion got 50 signatures, 10 more than the 40 that already existed until the morning of Monday, March 7, as announced by the spokesman for the Popular Renovation caucus, Jorge Montoya. However, this number would not be enough to be admitted to debate, since 52 votes are needed.

The motion is supported People’s Renewal (PR), People’s Force (PF) and Country advances (AvP). There are also five accessions of Alliance for Progress (APP), two of We are Peru (SP) and one of We can Peru (PP).

YOU CAN SEE: From confidence to vacancy: a strategy that weakens Congress or the Government?

Among the arguments that are supported by the motion are alleged “contradictions and lies” by Pedro Castillo in the tax investigations, as well as the appointments of questioned ministers, the existence of a “shadow cabinet”, the recent statements of Karelim López before the Prosecutor’s Officeamong other topics.

It should be noted that this is the second vacancy motion filed against Pedro Castillo as far as his government is concerned. The first dates from November 25 and was promoted by the congresswoman of Avanza País Patricia Chirinos.

Likewise, it was also agreed to set for this Thursday the debate on the motion to question the head of the Ministry of Health (Minsa), Hernán Condoridue to alleged irregularities in the management of his sector, an apparent lack of suitability for the position, affectation of the vaccination process, and resignations of officials in the ministry in rejection of his appointment.

YOU CAN SEE: Ambulance arrived at the Government Palace and transferred a 10-month-old baby to the hospital

On the other hand, the national parliament will account for the Order of the Day Motion No. 2064, which contains an interpellatory statement of 10 questions against the Minister of Justice, Ángel Yldefonso Narroby hiding information on your affidavit.

BB platform offers properties with up to 85% discount

Banco do Brasil will offer 3,100 properties for direct sale

Heber presented the crime statistics in the first quarter-2022

The Minister of the Interior, Luis Alberto Heber, led a

This Friday a challenge was held in Master Chef Celebrity

The also general director of the insurer “El Águila” will

Bucaramanga, Cali and Armenia, venues for the women’s Copa América

Alberto Fujimori’s lawyer after IDH Court ruling: “We have no choice but to comply with this”

Elio Riera, lawyer for Alberto Fujimoriconsidered that it only remains to comply with the ruling of

Do you know what the benefits of contributing to the AFP are?

Inter-American Court: Peru must refrain from implementing the ruling of the TC that restores pardon to Alberto Fujimori