I had nowhere to go. The ex-president Pedro Castillo He was going to the Mexican embassy, ​​in the San Isidro district, together with his family when he was detained for his own safety, according to a police report to which Peru21 had access.

It details that the former president and his family boarded two vans assigned to his service. Castillo was in the first with his wife, Lilia Navarro, her youngest daughter and former Prime Minister Aníbal Torres.

“When we were at the intersection of Av. Tacna and Av. Nicolás de Piérola, the SS PNP Nilo Aladino Irigoin Chávez –immediate security for the President, ordered the S1 PNP Josseph Michael Grandez López –driver of the EGY plate vehicle -552 (chest), go to the Embassy of Mexico, located at Av. Jorge Basadre No. 170 – San Isidro, so he continued in the direction of the headquarters of this embassy “refers.

“However, at approximately 1:35 p.m., the undersigned received a telephone call from General PNP Iván Lizzetti Salazar – Director of State Security, ordering that Mr. José Pedro Castillo Terrones be intervened by superior order, for being in flagrante delicto of the alleged crime of rebellion (article 346 of the Penal Code), abuse of authority (article 376 of the Penal Code) and violation of the Political Constitution of Peru (article 46)”Add.

The police report indicates that the procession was arrested at the intersection of Garcilaso de la Vega and España avenues, after which Pedro Castillo was intervenedarranging for his transfer to the headquarters of the Police Region of Lima for security measures.

LOOK: Is Christian Domínguez no longer a contributor to ‘América Hoy’?

“It should be noted that when the detainee was in the facilities of the Lima Police Region, Dr. Aníbal Torres Vásquez, identified with CAL registration No. 4531, stated that he was assuming the technical defense.”underline.

As recalled, with 101 votes in favor, 6 against and 10 abstentions, the Plenary of Congress approved in an early session the vacancy due to moral incapacity of Pedro Castillo. 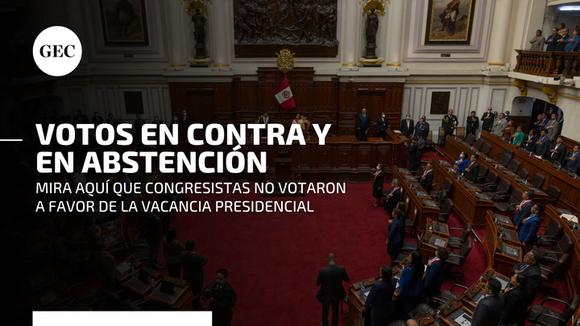 The Congress of the Republic advanced the debate and the vote for the presidential vacancy after the Coup d’état. Thus, Pedro Castillo was vacated with 101 votes in favor, 6 against and 10 abstentions.

Photo: File. The Ministry of Transportation of the province of

“We love you infinitely. Rest in peace”, published his daughter

GDF limits to 30,000 audience that will follow Lula’s inauguration in the Planalto

The Government of the Federal District (GDF) has limited to

In the context of a complex economic and social situation

Dina Boluarte on deaths in protests: “we are not going to allow impunity”

It calls for reflection. The President of the Republic, Dina Boluartesaid today December 29 that his