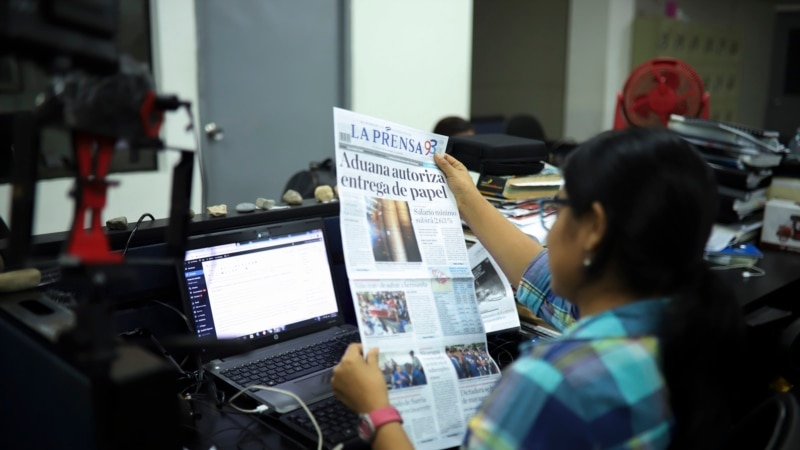 The newspaper The Nicaraguan Pressthe oldest in the Central American country and whose facilities have been occupied by the police for almost a year, reported on Thursday that its staff was forced to “flee” the country due to “the persecution of Daniel Ortega’s regime,” and that the rotary will reorganize its newsroom to continue working from abroad.

In a statement on its website, the newspaper pointed out that the departure of the staff occurred in the last 15 days, after the police raided the homes of several journalists and photographers who had covered expulsion from the country of 18 nuns of the Missionaries of Charity order, founded by Mother Teresa of Calcutta.

As part of the government repression, two drivers of the press They were arrested and sent to the El Chipote police jail, where they were given preventive detention for “investigations,” according to the same newspaper.

“The persecution that Daniel Ortega’s regime intensified against the staff of the newspaper the press this month and forced media personnel to flee the country. Journalists, editors, photographers and other personnel have been forced to leave Nicaragua irregularly in the last two weeks to protect their safety and freedom,” the report said.

He stressed that these people left “irregularly due to fear of being detained at the country’s borders, several had to flee without taking their passports with them or carrying only expired documents, since for months the regime has refused to renew the travel documents of independent media journalists, as part of the systematic repression and attacks on press freedom.”

The oldest newspaper in Nicaragua, founded in 1926 and which has only been working digitally for a year, did not identify the workers who went into exile, nor did it reveal how many left the country.

According to the pressthe harassment against the newspaper has continued in recent days and “despite the fact that the staff is not in their homes, police and civilians continue to come to their homes to harass their families.”

So far the government has not commented on the newspaper’s complaint.

The facilities of the press They were occupied by the Nicaraguan police on August 13, 2021, the day their general manager, Juan Lorenzo Holmann Chamorro, was also arrested, who is still in jail along with 190 other “political prisoners,” according to data from the opposition.

Two of Holmann’s cousins, the journalists Cristiana and Pedro Joaquín Chamorro Barrios, are also imprisoned, both under house arrest, while his brother Carlos Fernando was forced into exile in Costa Rica. The three journalists are the sons of former president Violeta Barrios de Chamorro (1990-1997) and the assassinated director of the pressPedro Joaquin Chamorro Cardinal.

The “forced exile of @laprensa staff is one more step towards the closure of any possibility of freedom of expression and the press. They are conditioning them to depend on other sources, making it impossible to verify in situ the abuses committed by the regime,” the Nicaraguan Center for Human Rights (Cenidh), whose facilities were also occupied and confiscated in 2018, denounced via Twitter.

Nicaragua is experiencing a serious political crisis that erupted in April 2018, when the Ortega government violently repressed a social uprising and caused 355 deaths, more than 2,000 injuries, 1,600 detainees at different times and at least 100,000 exiles, mostly refugees in neighboring Costa Rica, according to human rights organizations.

The newspaper La Prensa suffered censorship and repeated temporary closures during the military regime of Anastasio Somoza (1945-1979), and the assassination of its director in 1978. It was also persecuted during the Sandinista revolution (1979-1990), in which Ortega governed for the first time. The longest closure in the 1980s lasted about a year.

Nicaragua: The newspaper La Prensa reports that its staff is going into exile

MEXICO CITY – The newspaper The Nicaraguan Pressthe oldest in

Woman murderer of several stab wounds to her partner, in La Chorrera, and tried to take her own life.

A 46-year-old woman, apparently blinded by jealousy, ended the life

DEVELOPING NEWS The entrance Strong convictions of PCC members for

5 products that will turn your house into a smart home

According to a study conducted by the Economic Commission for

Woman murderer of several stab wounds to her partner, in La Chorrera, and tried to take her own life.

In the act of adulation of the dictator Daniel Ortega, on the 43rd anniversary of the

Monsignor José Leonardo Urbina Rodríguez, 51, was sent to trial this Thursday, July 21, by the

Chinandega judge leaves office and takes refuge in the US

Judge Roberto Zuniga, Originally from the municipality of Puerto Morazán-Tonalá, in the department of Chinandega, he

US points to Nicaraguan sugar as a means of pressure

The Nicaraguan newspaper La Prensa revealed this Thursday, July 21, that “journalists, editors, photographers and other