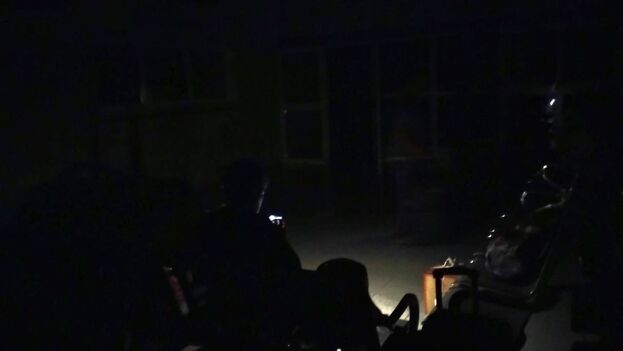 I could not postpone my trip to the city of Sancti Spíritus any longer. After several months without visiting my family, I prepared everything to arrive in the second half of July and spend a few days with my relatives in the center of the island. I thought I could escape the daily problems that plague Havana, but there I ran into long blackouts. , a food shortage more brutal than in the capital and a population about to explode with indignation.

The first day everyone told me “they haven’t turned off the light yet, you got lucky” and I looked at the light bulb in the kitchen to see when it was dark. The first night I was able to sleep with a fan, a privilege that the residents of Sancti Spiritus had already forgotten after so many early mornings fanning themselves or trying to capture some breeze at the front door of the house. But that “sweet welcome” soon turned into an ordeal.

During my second day the blackouts came and as soon as evening fell a cloud of mosquitoes came upon us. You couldn’t stay in the rooms because of the heat, but leaving the house was an absolute guarantee of dawn full of welts all over your body. Among my relatives, several had their skin full of bites and at least one of them also had symptoms of being infected with dengue.

At night the neighborhoods remained dark for long hours, inside a few houses the glow of a rechargeable lamp could be seen that barely lasted a while before leaving those families in the shadows as well. Taking advantage of the darkness, people shouted “Homeland and Life” but nothing happened, because not even the police dared to enter those streets that looked like the mouth of a wolf.

Although I had some beautiful moments with my relatives, deep down I was also counting down the days to return to Havana.

Everyone I came across seemed to be on edge from not being able to sleep. Many families in the neighborhood where I was did not send their children to school after an early morning without electricity. Others remain silent and without protesting because they live from some illegal business and do not want to draw attention to themselves, but no one knows how long that mask will last in the conditions that the people of Sancti Spiritus are experiencing right now.

“Our bread dough spoiled,” an employee at a state bakery told me. “We have been adding cassava to it, because that is what they told us to do, but since we don’t have electricity to work, it gets in a bad state due to the long hours of waiting.” After describing the situation and, when I thought that she was going to talk about the fact that they had had to discard the raw material, the woman added: “but today’s bread will come out with that same dough.”

Although I had some beautiful moments with my relatives, deep down I was also counting down the days to return to Havana. I never thought I would miss my neighborhood so much with its sewage, its long queues in front of the pharmacy and its noise at night. The two times I bought a small portion of pork I had to pay more than 2,000 pesos. In the end, I spent more than five times that amount on my visits to the farmer’s market and buying a few bags of bread from a private vendor. When leaving, I left a bottle of repellent that I had brought, because not even that can be obtained in a city that was once prosperous and with an intense commercial movement.

This Tuesday, when I arrived at the bus station to return to Havana, the place was completely dark, there was not even a rechargeable lamp to ensure that passengers could move smoothly around the room. I grabbed my luggage tightly and held it close until I got on the bus. Inside the vehicle, the air conditioning was at a minimum “because the situation is on fire,” the driver responded to customer complaints.

During the minutes that it took us to leave the city, only a few lights could be seen through the window, the rest was completely dark. Everyone on the bus was silent, trying to detect through the glass some indication that Sancti Spíritus was still an inhabited place, alive.

My vacations in Sancti Spíritus turned into an ordeal

I could not postpone my trip to the city of

The Circus 🎪| The Magician Pío, Delfina shows strength and show of the tricolor tiger

THE FORCED WOMAN Boasting a power of 47.3% compared to

Chinandega judge leaves office and takes refuge in the US

Judge Roberto Zuniga, Originally from the municipality of Puerto Morazán-Tonalá,

San Lorenzo: municipality announces destruction of motorcycles that are not removed by their owners

Through an edict published in written media, the municipality of

The Circus 🎪| The Magician Pío, Delfina shows strength and show of the tricolor tiger

If any citizen of the Island hopes that the “new measures to recover the Cuban economy”,