The rescue brigade team reported the finding of a possible fifth lifeless person under the rubble left by the collapse of La Esperanza hill, in the town of Retamas, province of Pataz, in La Libertad, last Tuesday, March 15. This is citizen Margarita Zenaida Polo Vigo.

The images broadcast by the aforementioned media show the brigade members working in the municipal market area of broom. “There is information about the discovery of another body of a woman of approximately 35 years named Zenaida. Now they are concentrating on this place to be able to recover her remains and that she can finally be transferred to the morgue, ”said the reporter.

In this way, the rescue work continues in a local market that has ended up partially buried by the immense amount of land and debris that has fallen.

rescuers have done holes in the walls to reach homes near the market that also ended up buried.

They report the discovery of a possible fifth fatality after the collapse in Retamas.

If the finding materializes, the number of deceased would be increased to five. The dead and identified persons are Edith Quinonez Torres (32), Santiago Indalecio Vasquez (62), Rolando Robles Ramirez (32) and a baby just one month old.

In addition, if it is confirmed that this fifth body was found, it would be necessary to locate a a 3-year-old boy, a 14-year-old teenager, as well as an adult, Channel N noted.

Declaration of emergency in Retamas

The Government declared a state of emergency for 60 days in the town of Retamasin the province of Pataz (La Libertad), after the glide of earth from a hill that has left people missing and several houses buried. The measure was made official through a supreme decree. 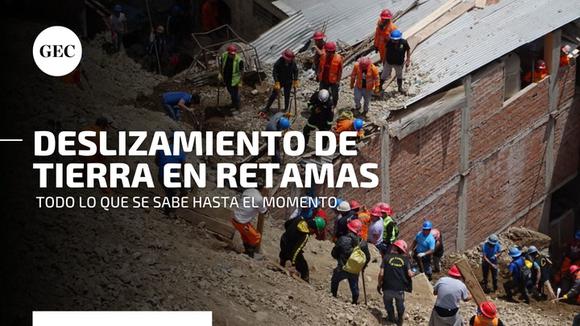 The director of Preparation of the National Institute of Civil Defense (Indeci), Miguel Yamasaki, said that due to the rainy season at this time this type of phenomenon always occurs and that now it has happened in an area like Retamas. Know all the details in this video.

Government freezes price of all fuels

The elected mayor of Arequipa, Victor Hugo Rivera Chavez, described as a complete misgovernment, the situation

To get to the “Chopcca Nativity” exhibit, you must pass through a block filled with the

Do you want to invest your free money in land? Follow these expert tips

Pedro Castillo: Supreme Chamber evaluates the legality of the decision of Congress on the preliminary trial of the former president