The President of the Republic, Luis Lacalle Pou, announced that he will veto the forestry regulation bill presented by the Cabildo Abierto and that it already has the votes of the Broad Front for its approval.

The only reason for the president is that it is “outside the document of Commitment for the Country”, the government plan endorsed and signed by the five parties that make up the multicolored coalition.

“The president is freed to act according to his own conception. If the bill is voted on, I maintain that the Executive Power will veto it, “Lacalle remarked upon returning from his tour of Qatar.

The president said that he feels “liberated” to apply the presidential veto to this bill that has generated friction within the same coalition but that unexpectedly brought the Cabildo Abierto and the Frente Amplio closer together. 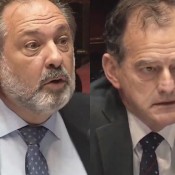 The Senator of the Cabildo Abierto, Guido Manini Ríos, questioned the coalition partners of …

Clashes with the government

Through the Ministries of Livestock, Agriculture and Fisheries and the Environment, the government had already ordered to halt the project, which seeks to adjust the criteria in the classification of forestry projects in Uruguay to regulate soils with timber forests.

The draft of the Open Town Hall Law had been approved in the Chamber of Deputies a year ago, on December 15, 2020. Through the initiative it was proposed to limit the approval of forestry projects for yielding forests that exceed planting densities of 150 trees per hectare exclusively to the areas included within the Forestry Law 15,939 and the regulatory decrees referred to said law.

Dominican Republic will lead the economic recovery of the region