Cuenca del Plata Terminal, made up of 80% by the multinational Katoen Natie and 20% by the National Ports Administration (ANP), decided to upload to their website the text of their appearance before the Contentious Administrative Court (TCA), “ so that public opinion has access to the elements that allow it to form a well-founded and true opinion on the dispute” whose purpose allows them to predict an “auspicious stage of national and regional projection for the Port of Montevideo”, it was expressed in a statement .

The port operator of Belgian origin published its presentation before the Contentious-Administrative Court in the case of Montecon SA against the Executive Power for the request for annulment of the agreement between Katoen Natie and the State.

Since then, both Katoen Natie and TCP “have tried to maintain a respectful silence in the midst of the whirlwind of accusations, lies and obfuscations resulting from the signing of the agreement between the government of the Republic and Katoen Natie in February 2021, an instrument by which would put an end to a dispute that would have led to an international dispute with serious damage to both parties,” the company said.

Katoen Natie assures that for more than a year, and in different scenarios, whether legislative, journalistic or judicial, “TCP and Katoen Natie have tolerated falsehoods or disqualifications, largely based on partial or malicious information, reaching the extreme of referring to the terms of the agreement as an ‘ill-gotten gain’”.

“This stretch of helplessness and ridicule, however, has come to an end. TCP and Katoen Natie have had their opportunity in Court and before it they have explained in detail, their grievances, their interpretation of the dispute, the scope of their commitments, and the manifestly irregular conduct of different actors in the port field, to the detriment of TCP and public finances”, indicated the international firm.

They emphasize that from now on it will be the Justice that determines the veracity of their allegations.

In this sense, they have decided to upload to their corporate website (www.terminalcp.com.uy) the text of its presentation before the Contentious-Administrative Court, so that public opinion can access it and form a well-founded judgment on the subject. 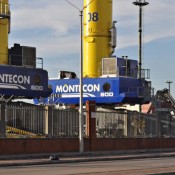 The shareholders of Montecon, the operator of the public docks of the port of Montevideo,…

Cuenca del Plata Terminal, made up of 80% by the

The National Government denounced before the international community the fact

The other side of cryptocurrencies

The intercultural hold Carvajal for 7 hours in Tariquía

Jorge Quispe / La Paz The eighty-year-old president of the

Mayors of the National Party do not support “this debt project”

The mayors of the National Party, in the Departmental Board of Montevideo expressed that they will

The President of the Republic, Luis Lacalle Pou, participated in the opening of the first Reference

Do Not Call Registration Begins April 30: How to Sign Up to Avoid Nuisance Calls

From April 30, the National Do Not Call Registry will be operational, a system by which

After declaring in Justice, Katoen Natie assures that "stretch of helplessness and derision has come to an end"

Photo: File. Prego questioned statements by the president of the Central Board of Directors of the