Former Transport Minister John Silva He has asked the MTC to cover his legal defense expenses amounting to S/350,000 while he is being investigated for receiving an apparent bribe of S/100,000 in exchange for the award of the Tarata bridge, in the San Martín region. In other words, he wants all Peruvians to pay his lawyer.

In the document submitted yesterday to the ministry, Silva invokes the Civil Service Law to access this legal benefit. The norm has rules that allow former officials to resort to this support when they face an investigation for crimes of function. If the request is approved, his lawyer Alfredo Yalan will receive the amount.

The revelation of a new audio starring the detained businessman Zamir Villaverde and Juan Silva, in which the former is heard talking about the delivery of S / 100 thousand for the former minister, not only complicates the latter but also President Pedro Castillo, accused of heading a criminal organization that distributed public works.

LOOK: Prosecutor’s Office confirms dialogue between Villaverde and Silva on payment of “100 large”

The conversation, broadcast by Willax, was recorded on November 4, 2021. The effective collaborator CE-02-5D-2FPCEDCF-2022 had indicated that on that date Villaverde went to the Silva department, located in Cercado de Lima, taking the S /100 thousand. But the audio has more details.

“The friends of Tapusa have sent me a present for you… a hundred grand (100 thousand soles) for you, they still do not charge anything, but it is a present of a good sign,” reads the transcript of the audio that raised the Prosecutor Karla Zecenarro to the Prosecutor of the Nation, Pablo Sánchez.

Tapusa SAC was part of the winning consortium that was awarded the construction of the Tarata bridge, in the San Martín region, which required an investment of S/232 million.

Villaverde adds that “Tarata is already won” and implies that the 100 thousand soles would be part of the gratitude. And he states that he is close to the Chinese companies that won tenders with the government.

Villaverde also refers in the dialogue that an “Anatolio” maintained that they were thinking of changing “the (chiefs) of ATU and Sutran.”

Among the MTC staff there is an official named Anatoly Pavel Ruiz Cueva, who works as a director in the General Secretariat with a salary of S/15,600.

On February 24 of this year, Ruiz was appointed by Juan Silva as a member of the Sutran board of directors.

At another point, the owner of Vigarza assures that the then Vice Minister of the Interior Óscar Gonzales is his friend and that they will soon appoint Colonel PNP (r) Lizandro Quiroga, another “friend”, as head of Sucamec.

-In the audio, Villaverde’s rejection of José Luis Cortegana, former director of Provías, who only lasted 13 days in office, is established.

–Peru21 He called Silva’s attorney to collect releases on the audio, but there was no answer all day. 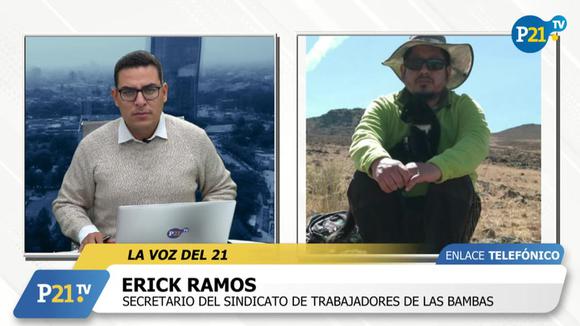 Former Transport Minister John Silva He has asked the MTC

Invest in bills, the option suggested by experts to hedge against inflation

Invest in bills, the option suggested by experts to hedge

Paraguay’s anti-drug prosecutor, Marcelo Pecci, was assassinated in Colombia while

In the same conversation on November 4, 2021, produced in the department of the former Minister

Latam Airlines suspends its operations until September at the Jaén airport

In Cajamarca, construction work continues on the specialized hospital run by the Social Health Insurance (It’s

The second vice president of Congress, Enrique Wong (Not Grouped), referred to the broadcast audio of