This Monday, May 23, the Ministry of the Interior published on its Twitter account that as a result of the letter from the president of Club Atlético Peñarol, Ignacio Ruglio, in which he denounced that the police prevented aurinegros fans from entering the Campeón del Siglo stadium with badges that made mention of the memory of the detainees who disappeared during the dictatorship, the ministerial authorities communicated with Ruglio on Sunday night to inform him of what had happened and what had been resolved, requesting an apology from him in the case.

“The Ministry of the Interior has taken the pertinent measures to avoid similar situations in the future,” says the Secretary of State.

Ruglio had published a letter through which he denounced that in the meeting on Saturday the 21st between Peñarol and Boston River, police officials prevented aurinegros fans who wore badges that alluded to the memory of the disappeared detainees from entering the Champion of the Century stadium.

The coal president expressed his disagreement with the way the Ministry of the Interior proceeded, especially with the Sports Violence Unit of the Montevideo Headquarters.

For her part, the deputy of the Broad Front Verónica Mato sent a request for reports to the Ministry of the Interior to learn about the events of last Saturday in the Champion of the Century.

Mato asks who reports to the Sports Violence Unit at the Montevideo Police Headquarters.

Likewise, he requested information on who acted as security observer in the meeting between Peñarol and Boston Rivera and why this person should inform the Security Commission of the aurinegro club about a flag with a daisy without a petal, which represents the detainees. missing.

The Frente Amplio legislator also questions whether there is any national provision that has censored this symbol that identifies those who are absent as a result of State terrorism. 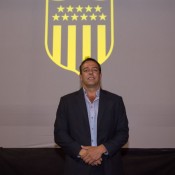 Ignacio Ruglio: The Ministry of the Interior denied entry to people with badges of the disappeared

For the president of the aurinegro cadre, the way of proceeding of the Ministry of the Interior…

More than 320 cases have been reported through the VenApp

Drug sales skyrocket in the DR in the pandemic

Stock Photo: Presidency of the Republic The polling company Equipos Consultores presented its most recent measurement

Cipriani affirmed that the CTI in Colonia will continue to function

This Friday, December 30, Dr. Sebastián Olaverri took over as Director of the Colonia Hospital, which

With a 66% predominance over electricity and firewood, diesel is the largest source of energy used