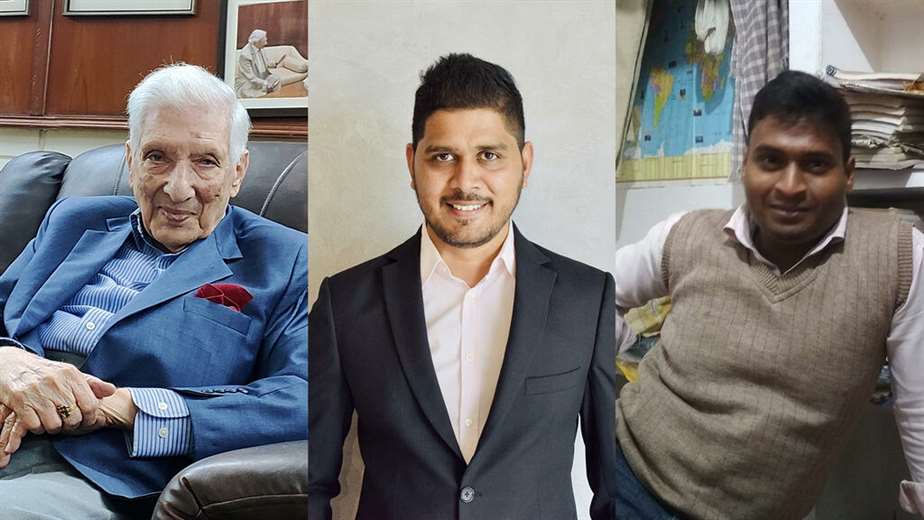 On August 15, 1947, India gained its independence after nearly a century of British colonization. and at the cost of a bloody partition with Pakistan. Since then, the country has had to rise up again, in an attempt to form an equal democracy. Three Indians of different ages and social origins analyze the evolution of their country in the last 75 years.

Maharaja Krishna Rasgotra has deep wrinkles and a slow walk. But this 97-year-old man has a sharp eye and a vivid memory. On August 15, 1947, when India and Pakistan gained their independence, he was 22 years old. The Kashmiri Hindu worked on the Indian side of the new border, but his entire family remained on the Pakistani side.

“My parents didn’t want to leave,” recalls Maharaja Rasgotra from his home in New Delhi. “They told me: ‘A line will be drawn, a border will appear, but we have good relations with our Muslim neighbors, so what can happen to us?'” “But the situation quickly deteriorated. In the pre-independence days, killings and rapes became more and more frequent in this part of western Punjab, where many Hindus lived at the time,” he notes.

So on August 15, the army rallied the Hindus to escort them out. “My elderly parents left everything and walked to the border with India,” says Maharaja Rasgotra. “It took them all day and they were attacked on the way, but with the protection of the army they survived,” he adds. Many others they were not so lucky. Hundreds of thousands of people perished in these attacks, and women were regularly raped. Even trains were robbed, with carriages arriving at stations full of corpses.

Up to 2 million dead

The young English literature professor then helped organize a huge refugee camp at his university in the border town of Ludhiana in India’s new Punjab. “Up to 50,000 people stayed here in tents. I could see the fear in these people’s eyes, they were terrified and their stories still haunt me,” says Maharaja Rasgotra.

“Some had lost half of their relatives, others arrived with a severed arm. A Sikh family told me that their daughters had preferred to commit suicide by jumping into a well to avoid being kidnapped,” she says.

This monumental exodus caused the death of between 200,000 and 2 million people and the flight of between 10 and 20 million more. This partition of India and Pakistan continues to haunt Indians because, 75 years later, the religious divisions that caused it remain deep and are regularly exploited by politicians. “The religious disturbances continue today, it is one of the legacies of this partition that we have not been able to get rid of,” concludes Maharaja Rasgotra, who was a high-ranking diplomat and, among other things, the Indian ambassador to France. .

From a modest family to the Indian Silicon Valley

But since those dark days, India has seen phenomenal development. When the British settlers left the subcontinent, famines struck regularly and killed en masse, the educational system was so underdeveloped that only 12% of the population could read and write.

Today, India is self-sufficient in food and even exports wheat; 77% of Indians are literate and its public engineering schools are recognized throughout the world. And the next generation is reaping the benefits.

Anand Kumar Rathi, 41, comes from a modest family in Rajasthan. His father did not finish high school and left this northern region to try his luck in southern India, in Tamil Nadu. “He was never afraid to take risks and through hard work his business became one of the biggest matchbox sellers in India,” he explains.

And that has allowed his sons to rise rapidly in society: Anand Rathi is now an investment banker and wealth manager in Bangalore. His company Augment, based in this Indian Silicon Valley, manages 5,000 million rupees of capital (about 60 million euros).

“India is two or three decades behind in its development because the educated elite of the country he has gone to work in the West,” laments Anand Rathi. “And it makes me angry that our country has not been able to offer places to these people who could have caused rapid change in the country. This brain drain has faded, and some are even returning to India, which makes the sector more competitive, “says the specialist.

“New technologies are at such an advanced level in India that it is no longer just offshore services and call centers, but the development of global artificial intelligence. The opportunities are going to be huge for India in the coming years,” says an optimistic Anand Rathi.

Inequalities and discrimination between castes

India’s economic growth, fueled in part by these new technologies, has been truly tremendous over the last thirty years and the Indian economy is now the third richest in the world, in terms of purchasing power parity. But this wealth is very poorly redistributed, which is why Indian society is also one of the most unequal: the richest 10% own 57% of the wealth, according to the Global Inequality Report, coordinated by the economist Thomas Piketty, among others.

Seventy-five years after independence, India also continues to suffer from two chronic ills: caste discrimination and corruption. “In my village, the upper caste people do everything they can to discourage me from studying, because they don’t want me to be more educated than them,” says Vivek Yadav, a 25-year-old lower caste student from Jaunpur, in the state of Jaunpur. Northern Uttar Pradesh. However, the son of a poorly educated day laborer and an illiterate mother has already broken through a glass ceiling: he has obtained a university degree in Political Science and is preparing for regional civil service exams, a job in the government that would offer him a guaranteed income and therefore a guaranteed way out of poverty.

But the entrance exam he took in July could be annulled, due to suspicions of corruption and test leaks. Vivek Yadav persists, however, with a dream for the India of tomorrow: that “the State strengthen the public education system, because today these schools are neglected, without fans or quality infrastructure, and it is difficult to study in them,” he laments. .

Half of the Indian population, about 700 million people, is under 25 years of age.. Providing quality education to as many people as possible will undoubtedly determine India’s future development.

India: 75 years of history through the eyes of three generations

Deadline for city halls to register with Bem-Taxista ends today

Today (15) the deadline given to city halls to register

They denounce violence against the Garrido sisters, imprisoned for 11J

Madrid Spain.- The Association of Mothers and Relatives for Amnesty,

Deadline for city halls to register with Bem-Taxista ends today

The ‘illegal’ market sells second-rate coca, it comes from Peru and Chapare

La Paz has 53% of the country’s new Covid cases