This Tuesday marks the second day of the strike in Cusco, where members of different unions and unions have organized marches and blockades in order to claim the Government against the rise in basic necessities, a new Political Constitution and the closure of Congress.

SEE ALSO: The strike in Cusco will continue this Tuesday the 19th despite the announcement of a visit by Pedro Castillo (PHOTOS)

As usual, in the face of this type of demonstration in the Imperial Region, the most affected are the tourists and the tourism sector in general, including the concessionaire of the Cusco – Machu Picchu railway has completely suspended the departure of trains to and from the world wonder, leaving thousands of locals and foreigners stranded.

In the midst of this strike we found a family of Argentine tourists who were traveling through the Urcos – Cusco road, who were impeded from passing and had to walk with their suitcases on their backs, rebuking the demonstrators for their blocking attitude, receiving insults and even threats from the people of Cusco.

“It is 40 kilometers that we have to walk to get to Cusco, there are mothers with their babies and these vagrants do not let us pass, we have been walking since 05:30 hours we wanted to come to Peru to invest and they do this to us, they are scourges”, said the tourist, being reached by the protesters who verbally assaulted him with heavy caliber insults and demanded “respect” because he was not in his country.

“TOURISTS PAY FOR THE BROKEN DISHES”.

For the president of the Cusco Chamber of Commerce and Tourism, Edy Cuéllar, the situation in Cusco due to the strike is unsustainable, he says that in the midst of a process of economic and tourist reactivation that is barely carried out in the region, these demonstrations only dent against the cusqueños themselveswhich mostly benefit directly or indirectly from tourism.

“We sympathize with the mistreated tourists, we Cusqueños are not like those misfits, We feel ashamed of others and we hope that we can clean up the image of our beloved Cusco and our beloved Peru, we ask the protesters and the State to reach an agreement once and for all and that representatives of the Government do not arrive to continue gilding the pill and ignoring the problems we have in this region”, quoted Mail.

Regarding the tourism sector, due to unemployment about 4,200 tourists would stop entering the region per day, Taking into account that the tourist spends approximately 500 soles per day, there would be a loss of more than 2 million soles so far, assured the man from Cusco.

– On the second day of unemployment in Cusco urban carriers decided not to comply with the demonstration and went to work with their unitshowever they were prevented by the pickets and attempts at anger and stoning were recorded. 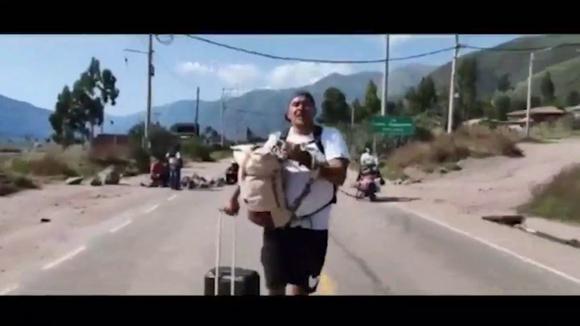 Congress: key political reforms will be prioritized in January

The Executive Branch and the Congress of the Republic for

Why are some New Year’s resolutions left unfulfilled?

It is customary to make a list of goals every

Head of State: We are going for higher objectives for the Homeland

The President of the Bolivarian Republic of Venezuela, Nicolas Maduro

The Vice President of the Nation, Cristina Fernandez de Kirchner,

The six suspects in the kidnapping attempt have been charged.

Congress: key political reforms will be prioritized in January

Lady Camones on voting for the disqualification of Freddy Díaz: “Unfortunately, he will be present”

-The Congressman Freddy Díaz was suspended for 120 days. When does he come back? January 7?

At midnight the elected governor of Junín, Zósimo Cárdenas, installs the Regional Council

[Perfiles21] Matilde Ureta de Caplansky: “We are going to heal”

Matilde, like her Cusco grandmother. She asks to be called Mati. She listens attentively and smiles.

Veronika Mendoza ruled on the complaint made by congresswoman Ruth Luque, who alerted through his social