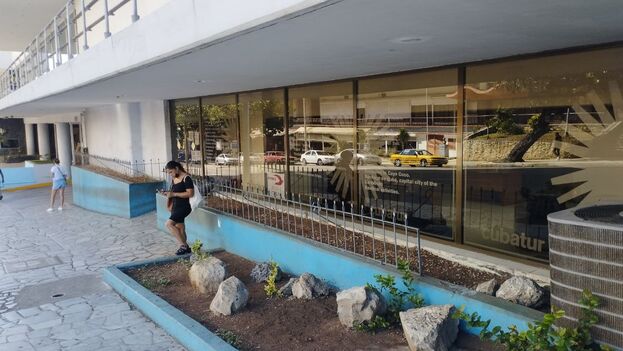 On a day like this Friday, after Havanatur announce tour packages facing the beginning of the high season on the Island, in October, the line in front of the Cubatur offices would have been so considerable as in previous years. It wasn’t the case today. The prices published by the state operator, whose cheapest rates do not fall below 4,000 pesos per night, are prohibitive for nationals.

Thus, the three people who were waiting at their doors, under the Habana Libre hotel, in Havana’s Vedado, did not have to wait long to be attended to. At the counter they were not offered cheaper solutions for vacationing and, in addition, they were given another jug ​​of cold water: the packages did not include transportation.

“It is not known if there will be transportation by then or not,” explained an employee, without giving more details, simply nodding when one of the women who was treated alluded to the lack of fuel. “No wonder there was no one today, who is going to stand in line with these prices and without transportation?” The lady lamented as she left the place empty-handed.

According to the Havanatur website, the Habana Libre is precisely the one that offers the cheapest night for two people: from 3,780 pesos

According to the Havanatur website, the Habana Libre is precisely the one that offers the cheapest night for two people: from 3,780 pesos. It is followed by the Iberostar Grand Hotel Trinidad, in that city of Sancti Spíritus, from 5,472 pesos, and Iberostar Parque Central, in Havana, with a night from 7,000 pesos.

If those urban rates are coercive, those of hotels on the beaches are impossible for the average Cuban, whose salary is less than 4,000 pesos a month. In Varadero, the room at the Hotel Meliá Internacional, all inclusive, is available from 20,000 pesos; in Paradisus Princesa del Mar, from 15,500; at Meliá Varadero, from just over 12,000 pesos, and at the Hotel Sol, from 11,000.

You practically have to carry the money in a bag to be able to afford an all-inclusive weekend in one of those spa accommodations. Just when it is 14 years since Cubans residing on the island were allowed to rent a room in national hotels, vacationing in one of these places is once again prohibitive, and this time the red line is marked by money.

On a day like this Friday, after Havanatur announce tour

No problem due to population growth

La Prensa denounces “hunting” against its workers by the Ortega dictatorship

The newspaper La Prensa, the oldest in Nicaragua, denounced this

Four men allegedly linked to the crime Against Freedom and

No problem due to population growth

As July 11 approaches, State Security deploys its tentacles to neutralize any attempt to celebrate the

Cuba under the table: "First anniversary of 11J"

This fifth episode addresses the first anniversary of the 11J protests in Cuba: Guests: Dagoberto Valdés,

The scarcity, once again, of chicken in the markets and the high price at which it