This Friday, santiago cafiero participates in Bali, Indonesia, in the meeting of foreign ministers of the G20, prior to the summit of leaders to be held in the same place next November.

During his speech at the meeting, santiago cafiero called to “build a solidarity-based multilateralism as an instrument of peace.” At the same time, The chancellor He added that “global problems cannot be solved unilaterally.”

santiago cafiero He also stressed that in order to solve the global crisis, multilateralism is needed “that is effective and is aimed at reversing the asymmetries between the North and the South”.

The chancellor, together with his G20 peers and representatives of international and regional organizations, debated during their meeting “current global problems, especially framed in the post-pandemic, the conflict in Ukraine and its consequences on world food and energy security” , according to the diplomatic office. 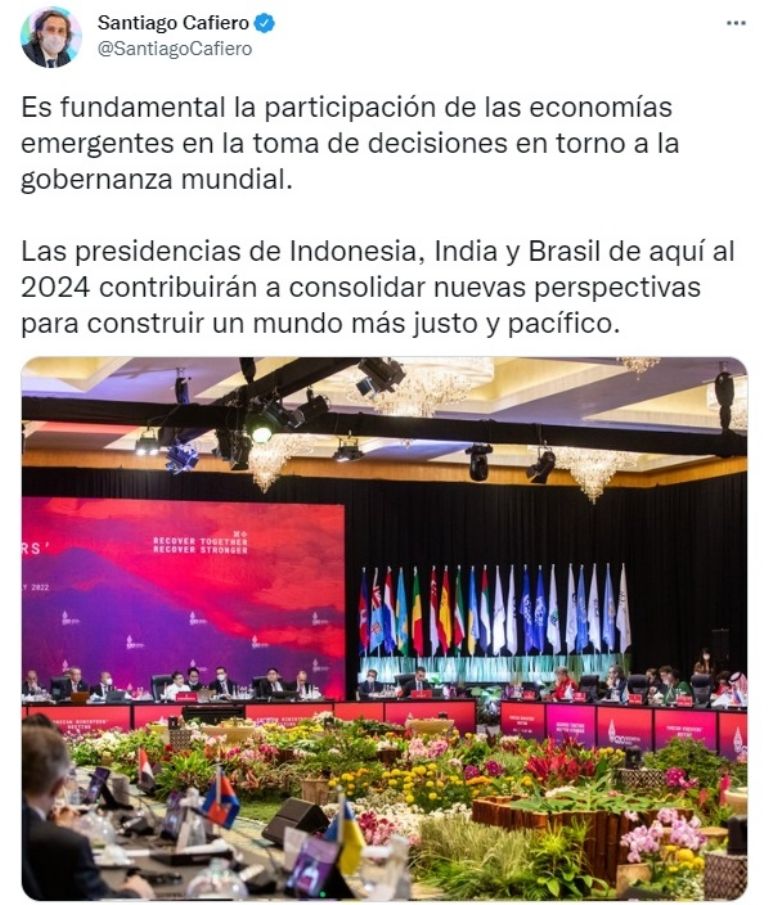 For this reason, the Minister of Foreign Affairs stressed that “the participation of emerging economies in decision-making regarding world governance is essential. The presidencies of Indonesia, India and Brazil between now and 2024 will contribute to consolidating new perspectives to build a more just and peaceful world.

The Foreign Minister traveled accompanied by the Secretary for International Economic Relations, Cecilia Todesca Bocco, and the Chief of Staff of the Foreign Ministry, Luciana Tito.

In addition, in the meetings that will take place today, the Argentine ambassador to the United States and Argentine sherpa before the G20, Jorge Argüello, will also be present.

The bilateral meetings of Santiago Cafiero in Bali

During his participation in Bali, The chancellor has held several bilateral meetings, among which the one he had with his Chinese counterpart stands out, Wang Yi, who confirmed the support of that country for Argentina to join the BRICS.

In addition, after his arrival in Indonesia, he spoke with the host minister Retno Marsudi; also with the High Representative for Foreign Affairs of the European Union, Josep Borrell; and with the Secretary of State of the United States, Anthony Blinken.

From Bali, Santiago Cafiero called for “building multilateralism of solidarity as an instrument of peace”

This Friday, santiago cafiero participates in Bali, Indonesia, in the

Shinzo Abe: how the attack in which the former prime minister of Japan was assassinated happened

President Jair Bolsonaro recently published a note on his Twitter

After The Liberal Party will announce that it will form

Shinzo Abe: how the attack in which the former prime minister of Japan was assassinated happened

Persecution and crash: three dead in the Pan-American

Photo: Police. three people died this Friday and a fourth was seriously injured when the car

Industrial activity rose 11.9% in May and construction 19.9%

Photo: File. Industrial activity registered in May an improvement of 11.9% compared to the same month

ANSES: who gets paid this Friday, July 8