Dozens of college alumni American Independence celebrated yesterday the 195th Anniversary of the traditional Arequipa institution, they made a parade on Av. Independencia and after the activity, many they decided to drink in the streets.

All this, contravening all recommendations in the midst of a resurgence of COVID cases in Arequipa.

Although the Prefecture Arequipa Regional denied the security guarantees to carry out the activity, Since Decree 016-2000 22 prohibits parades due to the health emergency that the country is experiencing, the invitation for the celebration was extended through a Facebook page of former students, which began with a ceremony at 10:00 a.m. in the school facilities. and there was even one meeting with an orchestra included in the local Don Gato, in Fence.

READ ALSO: They organize a party at the Goyeneche hospital, despite a resurgence of infections

without authorization, Blocks 14, 15, 16 of the busy Independencia Avenue were closed for the parade, causing the discomfort of the population due to the vehicular chaos that lasted for 5 hours.

After the parade, several former students, including older adults, took to the streets to drink alcoholic beverages without respecting health regulations. The Police and watchmen of the provincial commune had to intervene to dissuade some 200 people who occupied the streets until 6:30 p.m., according to the report, the streets were full of garbage and broken bottles.

Hours before, the director of the American Independence school, Walter Ramos, indicated that as an institution they would not carry out any activity.

“I take this anniversary with emotion, with commitment, with responsibility, it is a school that is heading to the bicentennial, it is historic and much loved in Arequipa, which has given renowned citizens at the level of the region, Peru and the world”, Ramos said. 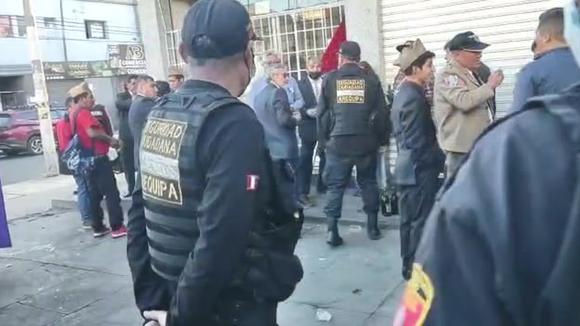 The former students of the American Independence school were removed for drinking along Av. Independencia, after the parade

New rector of the UASD: “It is urgent to address unfinished reforms”