This Wednesday, August 3, the former Minister of Tourism, Germán Cardoso, declared himself under investigation before the prosecutor for Economic and Complex Crimes, Gilberto Rodríguez, for the complaint of alleged irregularities committed during his administration (2020-2021). Cardoso appeared accompanied by his defense attorney, Jorge Barrera.

After the hearing, the former Secretary of State clarified that he came to testify of his own free will, without relying on parliamentary privileges.

In statements to the press, he pointed out that the direct purchases made during his administration were made based on “history of previous administrations, in identical instances the same was done in administrations of the Broad Front.”

“There was not a single expense in our administration that has not been with the consent and endorsement of the Court of Accounts of the Republic,” he said.

In reference to his alleged link with the Estonian-based company Kirma, which was contracted at the end of 2020 to provide digital advertising services for $280,000, the former government chief replied that “Kirma is part of a purchasing file digital companies that are three companies, not just one, and the amounts are reasonable and equivalent among the three companies. We had no knowledge of the ownership or who owns either Kirma or any of the other three companies.”

Cardoso considered that it has been proven that during his tenure at the Ministry of Tourism “there was no crime.”

Lawyer asks to file the case

For his part, the defense attorney, Jorge Barrera, said that during the Cardoso administration “no crime was committed.”

“We understand that there are elements to file,” he said.

In September 2001, the caucus of deputies from the Broad Front filed a criminal complaint against former Minister of Tourism Cardoso, for “direct purchases observed by the Court of Accounts, acquisitions from a single company for unprecedented amounts and excessive spending on advertising, among other facts”. 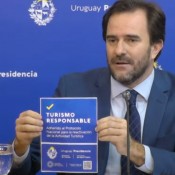 They withdrew their offer to “not be in trouble,” said the current Minister of Tourism. The purchase…

Member of the Colorado Party and former Minister of Tourism,

This Wednesday, the Sectorial Vice President for Citizen Security and

Massa: “Our goal is to grow with inclusion and we came to work for that”

Massa: “Argentina has the opportunity to become a great world

Zaporizhia: the largest nuclear power plant in Europe "he’s out of control," according to the director of the IAEA

Ministry of the Interior: more than five tons of drugs were seized in 2021

A Solo Uruguay: The depopulation of the countryside is a State policy of genocide of rurality

A few days ago, Un Solo Uruguay released a document entitled: “Genocide of rural areas in

The conflict in the dairy industry continues, now with a new focus of contention and an

The deputy of the Broad Front Cecilia Cairo questioned this Wednesday the Minister of the Interior,

ATSS: No one should work beyond the age of 60, which already seems like a high number

The President of the Republic, Luis Lacalle Pou, defined the preliminary draft of the Social Security