Seven members of a family lost their vacation trip to Paris, France, on Monday, April 11, due to problems registered in the Migration system for the issuance of an electronic passport at their office at the Jorge Chávez International Airport.

According to what one of its members told RPP, they had requested their passports from Immigration in January of this year to be able to travel to Paris on vacation on these dates.

However, in Migrations they were told that there were no appointments until June of this year, but that they had the option of approaching their offices at the Jorge Chávez International Airport, in order to process the emergency passports 24 hours before their trip.

They did so, but unfortunately this Monday they missed the flight because emergency passports were not being printed at the air terminal’s Migration headquarters since last Sunday night due to technical failures.

According to the passenger, with much discomfort, they had to pay $4,824 for the rescheduling of the flights for her and only some members of her family, since the whole family will no longer be able to travel.

“They do not give us solutions, there are no operations, there is no process, I ask you please, there are people who make me feel very sorry, adults, with crutches, with wheelchairs, children on the floor and not even a preferential queue”, he recounted.

During the morning the Superintendent of Migrations, José Armando Fernández, pointed out that “they are already printing the passports”. “This must be regularized over the course of the hours and we will be able to grant passports to each of the users who request it.”, he assured. And so it happened, but many passengers had already missed their flight.

According to the station, Interior Minister Alfonso Chávarry, who arrived at the scene to supervise the events, promised to negotiate with the airlines and travel agencies to reschedule the flights.

“They have told us that they do not assure us of rescheduling and that they are going to pay us the penalty, how are we going to do it, it is not fair. A lady has paid 10 thousand dollars”, also said the affected passenger. 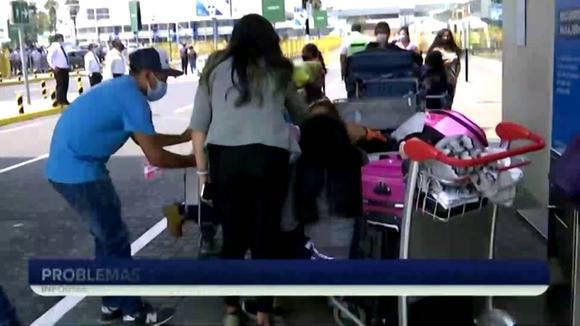 Family misses flight to Paris due to lack of passports and pays US $ 4,824 to reschedule their vacations (Source RPP)

Family misses trip to Paris due to lack of passports and pays almost US$5,000 to reschedule flight

Seven members of a family lost their vacation trip to

Santiago.-The Association of Merchants and Industrialists of Santiago (ACIS), demanded

Government will exempt companies linked to tourism from employer contributions

The measure, announced by the Ministers of Labor and Social

The Minister of Economy, Oscar Grahamsent this Monday, the observations to the Law Autograph that exonerates

Espinosa-Saldaña: ​​Resolution of the Inter-American Court on the pardon of Fujimori is a “pull of the ears” to the TC

Pedro Castillo Terrones assumed the presidency of Peru on July 28, 2021. With less than a

Exemption from VAT for pheasant and fine loin also “was passed” to MEF technicians, says Alva

Updated on 04/11/2022 09:35 am The President of Congress, Maria del Carmen Alvastated that the exemption