On Tuesday, March 1, Gabriel Gurméndez decided to immediately suspend the broadcast on VERA TV of the Russian signal RT, because, as he said, it is a “channel at the service of propaganda and justification of Russia’s violent military invasion of Ukraine. , an action condemned by our country”.

The decision of ANTEL’s president generated surprise and rejection from both insiders and outsiders.

Indeed, the deputy of the Broad Front Javier Umpiérrez sent a request for reports to the Ministry of Industry, Energy and Mining for ANTEL, on the understanding that Gurméndez’s decision is an “outrage against freedom of the press, rarely seen in our democratic system.”

In his request for information, he asks if the resolution to immediately suspend the broadcast has already been adopted, and he requested that the reasons for said decision be indicated, as well as reports or opinions to know on what it is based.

Umpiérrez asks ANTEL to clarify whether it is a suspension for a specific period or a definitive cancellation.

The Frente Amplio legislator also questions whether the telecommunications company has any type of contract with RT that has the purpose of transmitting said signal and whether the resolution of the suspension will generate any type of damage or claim.

He asked if the determination was made in consultation with the Foreign Ministry and if it falls within the context of other decisions that Uruguay has adopted in reference to international relations with Russia.

For his part, the senator and leader of Cabildo Abierto, Guido Manini Ríos, also questioned ANTEL’s decision. In what appears to be a new split within the ruling coalition.

The parliamentarian assured that freedom of expression must always be respected. “It doesn’t matter what is said, who says it or who he defends. Freedom matters.”

Senator Raúl Lozano (Open Council) spoke in the same vein, assuring that his political sector considers that “freedom of thought or expression and listening to the different bells is good.” 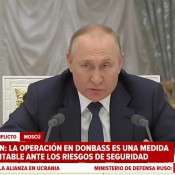 After two years, without taking place due to the pandemic, Beer Week returned

In the afternoon, Vice President Beatriz Argimón arrived at the

public and private debt it reached US$171,954 million at the

The electoral body announced that, while in the basic and

How much is the dollar trading against the Dominican peso

After two years, without taking place due to the pandemic, Beer Week returned

In the afternoon, Vice President Beatriz Argimón arrived at the Beer Week in the department of

After a very strong fall, there was a gradual recovery of agricultural marketswho begin to see

Sanchez: "Orsi reaches much broader sectors of the FA and is seen inside"

Alejandro Sánchez, senator of the MPP in an interview with El Observador: “Orsi reaches much broader

The property market remains extraordinarily firm. The pace of work and the values ​​surprise again. The