This Monday, November 8, ANTEL filed a criminal complaint against the past administration for the construction of the ANTEL-Arena multimodal complex.

As a result, the director of the FA in the telecommunications company, Daniel Larrosa, said that ANTEL Arena is a necessary infrastructure for Uruguay.

“I checked the quality of their facilities and confirmed the veracity of the positive evaluations from specialists, technicians, artists and the public. I regret the negative campaign that is promoted in public opinion ”, expressed the director of ANTEL on behalf of the opposition.

Larrosa said that everything is about a “mounted circus that has more to do with a political communication campaign than with the good management of public affairs.”

He remarked that “based on an inconsistent audit, this valuable heritage was degraded for one year.”

“I want to inform the public that no alleged criminal act was pointed out by ANTEL’s legal authority. The entire complaint process has been handled by a contracted private study, “said Larrosa in reference to the audit carried out by Ecovis linked to Herrerismo.

On the other hand, Larrosa said that the ANTEL Arena is unknown in the company’s strategic plan, there is “not a written line”.

“Meanwhile, we continue not to advance in 5G, with deficiencies in the quality of Internet services and a brake on incipient services, such as Vera TV, digital identity and electronic wallet,” he questioned. 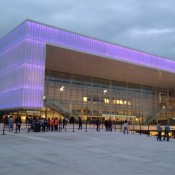 The dictatorship of Daniel Ortega and Rosario Murillo continues with

The SNM pointed out that the director Samira

The crash had a balance of at least 17 injured.

Fish farming in the Chapare grew by 181% in five years

Government put an end to the coronavirus health emergency

The national government resolved to end the health emergency that was declared on March 13, 2020

The President of the Republic communicated the increase in Mercedes, when touring the city affected by

Since this Monday, the stationers of Maldonado do not accept debit or credit cards for the

Photo: Carlos Loria / LARED21 The President of the Republic, Luis Lacalle Pou, has been studying