Front-Among senators Daniel Caggiani, Alejandro Sánchez, Sebastián Sabini, Charles Carrea, Sandra Lazo and José Carlos Mahía sent a request for access to information to ministers Luis Alberto Heber (Interior) and Francisco Bustillo to find out the mechanisms by which they were granted the Uruguayan passport to Sebastián Enrique Marset Cabrera.

The FA legislators request to know if Sebastián Marset Cabrera managed the passport application in 2019, and if so, “they ask to be sent a copy of the file and to specify the reasons for their denial.”

They request to be specified the “administrative procedure that is followed when the passport is requested by a person residing outside the Republic” and “if it existed at the time of initiating the respective procedure for the issuance of the passport, requisition and/or notification red from INTERPOL of Mr. Marset Cabrera”.

“It is necessary to point out that the information required is not of a reserved or confidential nature, not being, therefore, within the exceptions established by the current regulations, which are of strict interpretation”, consider the legislators.

Marset Cabrera is 31 years old and is of Uruguayan nationality. According to the Paraguayan press, he is the main defendant in the “A Ultranza Paraguay” operation, an investigation that began at the end of 2019 with raids on companies in Asunción and stays in the interior of the country as a result of investigations into money laundering. and shipment of cocaine to Europe.

According to SNT Paraguay, he is the “supposed facilitator” of the organization since he has contact with cocaine producers and facilitates the South America-Europe route.

In 2012, Operation Halcón -which was carried out in Uruguay- allowed the arrest of the airplane pilot Juan Domingo Viveros Cartes (uncle of the former president of Paraguay, Horacio Cartes) for transporting 450 kilos of marijuana in a small plane. The drug was destined for Marset Cabrera.

In October 2013, Marset Cabrera was prosecuted and sentenced as “co-author criminally responsible for three crimes of illicit drug trafficking in the form of organization and as co-author in two of them.” He served a sentence in Uruguay, was released in 2018 and settled in Paraguay, then moved to Dubai where he was arrested for carrying a false Paraguayan passport, but Uruguay granted him a Uruguayan passport and now he remains a fugitive. 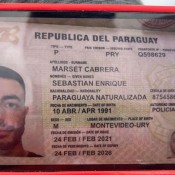 The Foreign Ministry granted a passport to a drug trafficker arrested in Dubai. Thanks to that he is free

What you need to know about dengue in the DR

Ignacio Zuasnabar: “It seems that the referendum was the day after the ballot”