At the initiative of Mothers and Relatives of Uruguayan Detained Disappeared, CRYSOL, FUCVAM, FEUU) and the PIT-CNT, a mobilization will be held on Thursday, December 9, from Plaza Libertad to the Legislative Palace, against the Open Town Hall project to grant prison domiciliary for people over 65 years of age, and that would benefit military confined in the Domingo Arena jail.

This Friday, December 3, the Political Committee of the FA spoke about the project and the mobilization promoted by different social, union and human rights organizations.

“Before the bill to grant home detention to those deprived of liberty over 65 years of age, in a clear attempt to benefit inmates imprisoned for crimes committed during the civic-military dictatorship, of which the Broad Front already stated on November 12 Its rejection, the National Political Board of the FA expresses its “commitment to truth and justice and the firm desire that in Uruguay the atrocities that occurred during the last dictatorship will not be committed again.”

The Frente Amplio political leadership body states that “truth and justice are the only means to achieve reconciliation among Uruguayans, but that it will only be an intention while there is a pact of silence that they intend to maintain.”

The FA assures that the historical claim of the Uruguayan Mothers and Relatives of Disappeared Detained, of the association of former political prisoners – CRYSOL, as well as the rest of the organizations that fight for truth and justice “is more current than ever.”

“The achievements obtained in the fight for human rights and truth and justice have been achieved from the streets, militancy and the tireless mobilization of compatriots committed to this cause,” the front-line supporters underline in the statement.

Therefore, the National Political Committee of the FA “adheres and summons” the population in general and the Frente Amplio in particular to “accompany the mobilization organized by Mothers and Family Members, CRYSOL, FUCVAM and the PIT-CNT to be held on December 9 at the 18th hour from Libertad Square to the Legislative Palace, against the bill that seeks to grant house arrest to inmates imprisoned for human rights violations committed during the civic-military dictatorship ”. 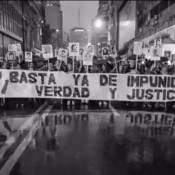 At the initiative of Mothers and Relatives of Uruguayan Detained Disappeared, the Association of …

Punta Catalina, with lower production cost than the others

Despite the complicated international context that maintains the price of

A man, from Nueva Palmira, known for being very active

The National Institute of Meteorology and Hydrology (Inameh) predicts that

Florencia Guzzeta: the traveler who has changed her life by touring the country by bicycle

More than 1,400 citizens have applied for electoral boards