The Ministry of Education launched the second call to participate in the Progress Scholarshipsso that more young people and adults throughout the country can complete or resume their studies.

The program which operates through the ANSES (National Social Security Administration) offers an economic stimulus, since the objective of the Progress Scholarships is that all people between the ages of 18 and 24 “complete compulsory education and advance to tertiary or university studies”. 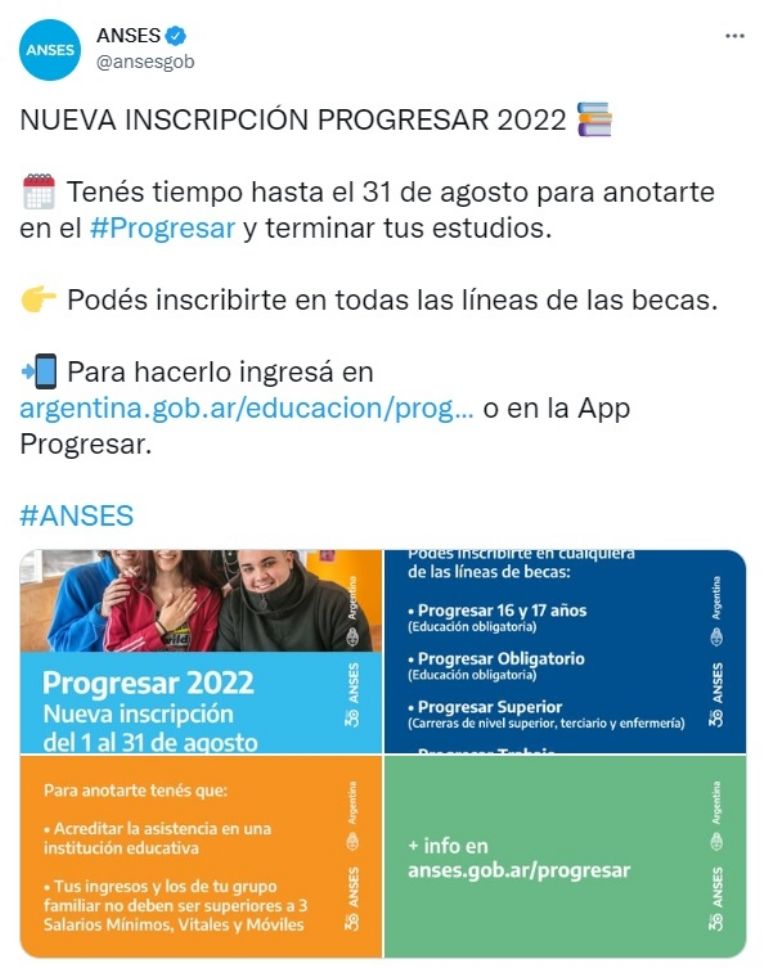 It should be remembered that the economic stimulus is granted according to the different lines of the program, thus, the beneficiaries of Progresar Obligatorio, Progresar Superior and Progresar Trabajo receive $6,400.

For each of the lines, it is a requirement that the income of the interested party and his family group does not exceed three Minimum, Vital and Mobile Salaries (SMVM); in addition to certifying attendance at an educational institution.

It should be remembered that scholarships are paid monthly for 12 months. “80% is charged month by month, and the remaining 20% ​​after accrediting the regularity of the studies; except for advanced higher level students who charge 100% of the amount”, according to the Government.

What requirements are required in Progresar Scholarships

Although each line of Program has different requirements, the main ones are: be between 16 and 24 years old, be an Argentine resident, in addition to being a regular student at an educational institution.

For some lines, the age limit is extended to 35 years for citizens with children under 18; while there is no age limit for trans people, indigenous peoples, people with disabilities or refugees.

Enrollment for Progresar Scholarships has opened: until when can I sign up

The Ministry of Education launched the second call to participate

Free workshops, a live printing press and more than 80 artists at the 1st Festival of Trades and Graphic Arts “Kontrabando”

East August 6 and 7 will take place in the

Much has been said in recent days about the possession

Most AMBA drivers do not know how to use their lights on foggy days.

Massa: “Our goal is to grow with inclusion and we came to work for that”

(Video capture). The Minister of Economy, Sergio Massa, assured this Wednesday that Argentina “He has the

The seizure of the Iraqi Parliament continues and now they are calling for early elections. Photo: