The director of the national defense and civil defense office of the Regional Government of Tacna Tito Chocano Rabanal explained that 43,880 victims were registered, 26,120 affected, 1,855 deceased, 4,259 injured and 615 missing, after the alleged earthquake of 8.2 degrees on the Richter scale which was presented today in the drill at 10 o’clock.

WATCH THIS | Hospital director Hipólito Unanue de Tacna arrested for drunk driving: “I am a human being, I made a mistake”

From the Regional Emergency Operations Center (COER) Tacna welcomed the active participation of more than 60% of the population of Tacna, who evacuated homes, schools, markets and other closed areas to train their reaction to the occurrence of a real movement telluric, which could occur at any time.

Call for declaration of emergency

“Due to the number of people affected and deceased in an earthquake of this magnitude, the attention capacity of the region is exceeded, which is why the declaration of an emergency is requested to start receiving the help of everything that is INDECI at the national level” he explained.

YOU MAY BE INTERESTED | Tacna: Provincial and district municipalities execute less than 25% of their budget

The authorities focused on the COER after participating in representations of landslides and fires in the Central Market of Tacna and in the Zonal Market of Ciudad Nueva, where the brigade members of the Fire Department, Army, Police and Red Cross put their training into practice. 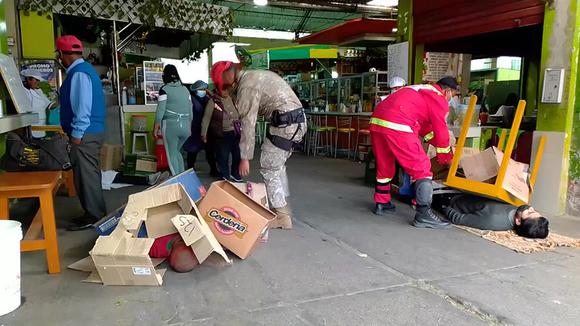 The director of the national defense and civil defense office

Conep: entrepreneurship was key in the country’s recovery

During the celebration of the National Day of Private Enterprise,

The president of the UTE, Silvia Emaldi, inaugurated rural electrification

From the spaces of the auditorium of the National Institute

Conep: entrepreneurship was key in the country’s recovery

Pedro Castillo’s lawyer: “The president has to work and there is harassment by the prosecution”

The President of the United States, Joe Biden, has sent a letter of invitation to President

John Kelvin: What is the minimum and maximum sentence for a batterer of women?

The lawyer Katty Cachay, partner of Estudio Warthon Abogadosexplained to us about the legal consequences that

Julio Favre, president of APA: egg production would be falling by 5%