On June 6, the plane entered Argentina from Mexico, after stopping in Venezuela, two days later it took off for Uruguay to refuel, but the Ministry of National Defense denied the landing after warning from the Ministry of the Interior, and then it had to land again in Argentina.

After that, the Argentine Justice launched an investigation into possible links between the crew and the Quds Forces, a division of the Islamic Revolutionary Guard Corps, classified by the United States as a terrorist organization.

As a result of Uruguay’s decision, the Government of the Bolivarian Republic of Venezuela denounced before the international aeronautical community a “regrettable action that could have caused a tragedy, human losses and damages for both nations, in addition to flagrantly violating the freedoms of the air, in accordance with the provisions of article 140 of the Organic Law of the Civil Aeronautical Authority”.

The Foreign Ministry of the Caribbean country considered what was raised unacceptable and demanded explanations from the Uruguayan government authorities. At the same time, he urged to ensure the principles of security, fraternity and brotherhood that have historically guided relations between the two nations.

As a result of the events, the Minister of National Defense, Javier García, will appear this Monday before the National Defense Commission of the Senate, at the request of the Broad Front (FA).

For his part, the secretary of the Presidency, Álvaro Delgado, told the press that Uruguay made a “sovereign” decision, after making sure that the aircraft “had enough fuel so that there would be no other type of risk.”

“Uruguay acts within the framework of the law, those who sign the document are in government in other circumstances. For us, Venezuela is far from being a democracy,” Delgado said.

He stressed that, on the other hand, “Uruguay is a country recognized for being one of the highest in quality of democracy in Latin America, in freedom of the press and in respect for legality. No other outsider with less legality is going to be able to endorse any responsibility on us.” 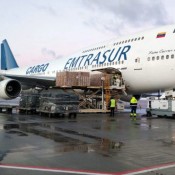 Venezuela asks Uruguay for explanations for rejecting the Emtrasur plane

Delgado: Uruguay made a sovereign decision by preventing the entry of an Emtrasur plane that had fuel

On June 6, the plane entered Argentina from Mexico, after

Both the indigenist and the journalist died from hunting gunshots.

Sarmiento defeats Patronato at the start of the fourth day

The return of "children of the town": 40 years after the return of soldiers from Malvinas

Alberto Fernández and the plane: “They wanted to show something that is not”

The president of the Argentinian republic, Alberto Fernández issued some statements regarding the controversy generated by

“Agro spills, to see it you just have to walk around the country”

Martin Uria, producer in Cerro Largo, assumed the presidency of the Rural Federation (FR) on Monday,

The president of the State Health Services Administration (ASSE), Leonardo Cipriani, acknowledged a Total or partial

Fernando Pereira: “We came to listen and receive proposals”

The president of the Broad Front, Fernando Pereira, spoke at a press conference, after meeting in