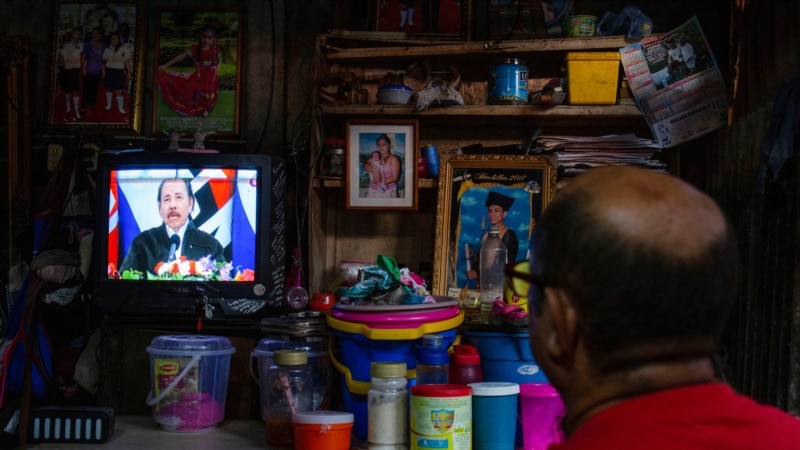 The Nicaraguan president, Daniel Ortega, appeared on national television to celebrate the ruling of the International Court of Justice in The Hague on Colombia, and accused the president of that country, Iván Duque, of “insulting and attacking the nation” and of not abide by the new sentence of the highest court.

Surrounded on Thursday by his wife and vice president Rosario Murillo and other authorities, including the head of the National Police and his in-law Francisco Díaz, Ortega continued his speech by reiterating his accusations against Colombia according to his definition that it is a “narco-state” at the service of the United States.

Ortega said that Colombia acts in an untimely manner because it has the support of the United States.

“What makes them so challenging? …they are behaving just like those who are their great protectors, those who have the bases installed there in Colombia, the North American rulers. And who governs the United States? The arms manufacturers,” Ortega said.

Colombia’s reaction after the ruling in The Hague

Earlier on Thursday, President Duque stated that what exists in Nicaragua is a “disgraceful dictatorship that ignores the fundamental rights of the opposition, the free press and private enterprise.” He indicated that he would not send any ambassador to Managua “until democracy is restored.”

He also said that the Hague ruling “defends aspects of great importance that validate our defense.

“My government, until next August 7, will continue with the superior task of preventing Nicaragua from limiting or trying to limit the rights of Colombia (…) we will seek the protection of the marine environment and the interdiction of maritime drug trafficking,” he said. Duke.

The Nicaraguan president continued questioning Duque, indicating that he hoped his statements “remain in words and do not go on to try to violate what is a right that has been recognized since 2012 by the International Court of Justice in The Hague. ”.

Nicaragua’s representative in The Hague, Carlos Argüello, told official media that the fact that Thursday’s hearing ordered Colombia to cease its illegal conduct in Nicaragua’s Exclusive Economic Zone in the Caribbean Sea had made it clear that the Nicaraguan administration Duque has violated the rights of Nicaraguans.

“The Court says it very clearly. So, I think it’s a day for all Nicaraguans to celebrate. So personally, naturally as a Nicaraguan I am very happy. I think it was a great success for everyone,” said Argüello, in a telephone intervention from The Hague.

The Nicaraguan president, Daniel Ortega, appeared on national television to

Alberto “Octopus” Palumbo. At the Social Security Institute (IPS) they

Dozens of community members, carrying their banners and posters, staged

Despite resistance from the main opposition parties and comments against

Through a forum presented virtually, political scientist Manuel Orozco exposed the “vulnerability and implication of their

In 2021, Nicaragua had the largest increase in tax collections in the last four years, revealed

The Nicaraguan deputy Wilfredo Navarro charged this Thursday against the president of Colombia, Iván Duque, whom

During the forum entitled “Voices of exile-Voices of hope,” human rights defenders denounced and rejected the