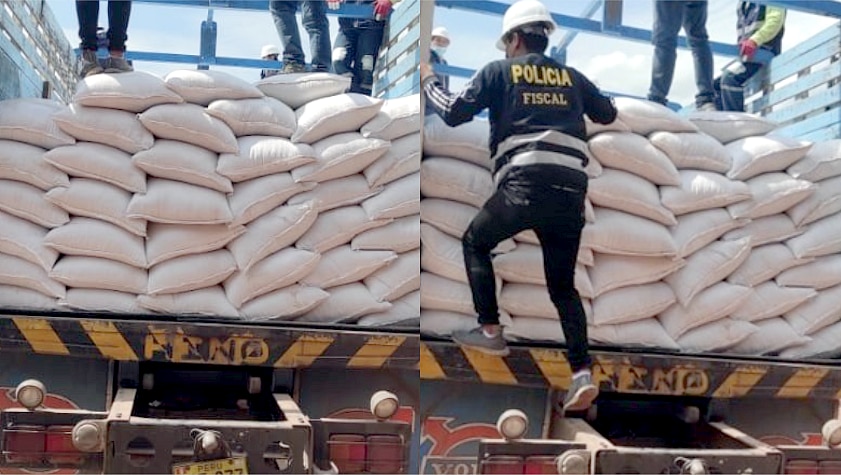 Agents of the Cusco Fiscal Police, in joint work with Customs personnel and the Second Provincial Criminal Corporative Prosecutor’s Office of Calca, carried out a police operation aimed at controlling merchandise of foreign origin, achieving the intervention of two heavy vehicles where a large amount of grain was seized. corn, soy flour and sugar.

SEE ALSO: Holy Monday: devotees of the Lord of the Tremors receive his blessing in Cusco (VIDEO)

The first action occurred on the San Salvador – Pisaq highway, where the X4E-933 rolling plate vehicle intervened, driven by Julio Condori (31), who was transporting 14 tons of corn and two and a half tons of sugar with the Pomalca brand reference.

At the time of the intervention, the driver presented an almost illegible simple photostatic copy of the transfer document, which is not related to the DUA described in the sender’s reference guide; also, the documentation presented by the carrier when verified in the Customs system, it reports as non-existent; reason for which the driver was arrested, the merchandise and the means of transport used were seized.

Subsequently on the road to San Salvador – Pisaq, jurisdiction of the Huambutio Population Center, The agents intervened the Z2M-824 plate vehicle driven by Carlos Lopez (41), which was transporting 22 tons of corn and two tons of soybean flour with reference Harina de Soya – Santa Cruz – Bolivia.

The driver at the time of the intervention presented an almost illegible simple photostatic copy and a sender reference guide; In addition, the documentation presented by the carrier when verified in the Customs system reports as non-existent, which is why the Police proceeded with the arrest of the driver, seizure of the merchandise and the means of transport used.

Agents of the Cusco Fiscal Police, in joint work with

PLD says it is the only option against PRM

The general secretary of the Dominican Liberation Party (PLD), Charlie

"What country does Gurmendez live in?": the union’s criticism of the president of Antel

The President of the Single Telecommunications Union (Sutel), Gabriel Molina,

A vast morichal that surrounds a large part of Maturín

PLD says it is the only option against PRM

Learn about the role of financial education in this digital age

The evolution of digitization has allowed us to understand the importance of technology, in the personal,

Congress: they summon a plenary session for this Tuesday 12

Family misses trip to Paris due to lack of passports and pays almost US$5,000 to reschedule flight

Seven members of a family lost their vacation trip to Paris, France, on Monday, April 11,

The Minister of Economy, Oscar Grahamsent this Monday, the observations to the Law Autograph that exonerates