Within the framework of the celebration of the May Revolution that is commemorated this Wednesday, May 25, different leaders and politicians have wanted to commemorate this date, among them, Cristina Kirchner.

Through their social networks, the vice president sent a strong message, there Cristina Kirchner He wanted to pay homage to the national holiday and reiterate his affection for the Argentine people.

“With the same love as always for our country and our history, even in such difficult times for our people, today more than ever, long live the homeland, Argentine men and women!”wrote Cristina Kirchner.

The message quickly went viral with more than 10,000 likes, more than 3,000 retweets and thousands of comments, where citizens also took the opportunity to wish the president a happy holiday. 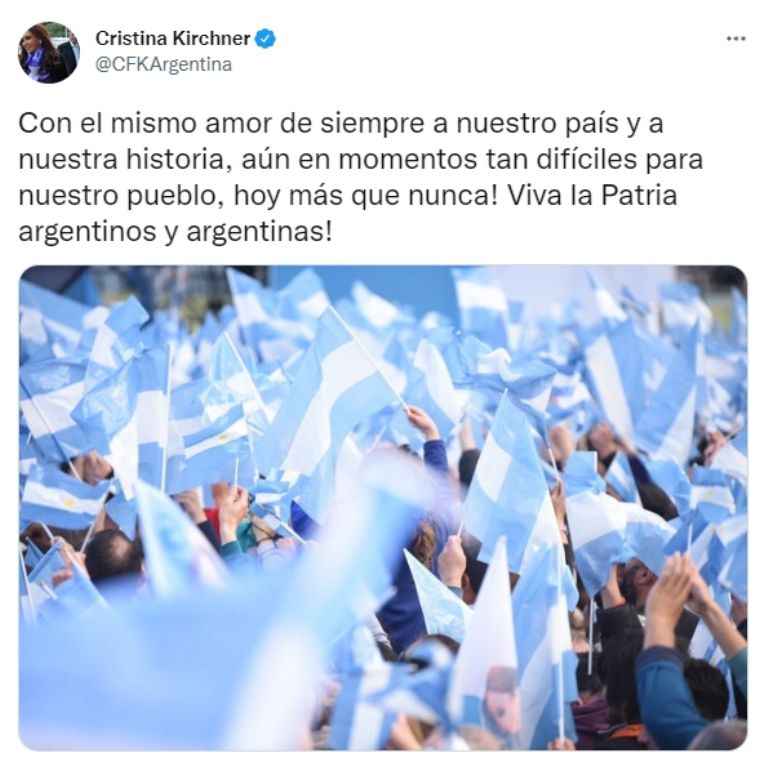 It should be remembered that in addition to commemorating the May Revolution, May 25 is a very special date for politics, since in 2003, her late husband, Néstor Kirchner, assumed the presidency of Argentina for the first time.

In addition, during what later became Cristina Kirchner’s mandate, some of her most important mobilizations, with the support of the Cámpora, were also held on this date.

Unlike Alberto Fernandez, the vice president He does not plan to participate in protocol acts for the national holiday, since it was known that he is in Santa Cruz, along with his son Máximo Kirchner.

What is celebrated this May 25

This Wednesday is a national holiday since the Day of the Fatherland is celebrated in commemoration of the May Revolution of 1810, when the first national government was formed, which in turn later allowed Argentina to declare its independence.

Although not only events occurred on this date, May 25 was the most important day, since with the constitution of the First Governing Board, Viceroy Baltasar Hidalgo de Cisneros was dismissed.

Last day to access the benefits of the Pre-Travel program

Today, December 31, is the end of the year and

Kenyan Catherine Reline did not allow anyone to threaten her.

“Ready your pocket for 2023”: Taxes, services and products that Colombians will have to pay more expensive

One of the first touches to the pocket are the

The roadblock in San Julián is maintained; they request the presence of Governor Camacho

4-1: A record Palmeiras sends Deportivo Táchira to the Copa Sudamericana

Last day to access the benefits of the Pre-Travel program

Today, December 31, is the end of the year and also the last day where the

Graham: “It’s pretty hard to know whether or not there’s misleading advertising.” New voices, a specialist

coffee maker: "We support the need to review the IMF’s surtax policy"

Photo Sebastian Granata. Chancellor Santiago Cafiero said that a review of the surtax policy of the