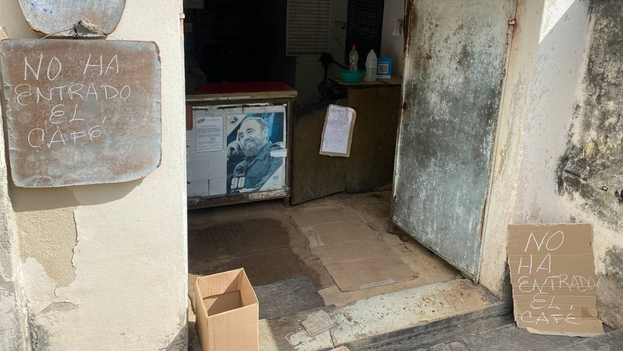 There is a hunger that is not satisfied with food or diminishes even if food is obtained and is not lacking again for a long time. It is the hunger that remains in the memory and makes the stomach burn even if it is full. That chronic feeling of emptiness runs through the story of a young man in the Cuba of the Special Period that the writer Enrique del Risco has published with Editorial Platform.

Our hunger in Havana it is a testimonial to start reading after dinner, and even then, it will cause the reader intense bursts of anxiety about putting something in his mouth, constant trips to the refrigerator and the kitchen. The volume, of a little more than 300 pages, plunges into the crisis of the 90s and crudely portrays the national obsession around the plate and the pots.

Del Risco shows the ribs outside of a society reduced to the cycle of the most basic survival, where getting around, standing in line and trying to chew anything took up most of the time. With a direct, ironic style and, many times, appealing to the most stark humor, the writer allows us to accompany him along the path of voracity that took over the entire Island.

Thus, in the hands of a young man recently graduated from History, we are witnessing the moment when the false bubble of prosperity that the Soviet subsidy allowed in Cuba during the 1980s begins to crack. Like a gathering cloud, the first symptoms of an economic crisis to which Fidel Castro hung the euphemism of “Special Period in times of peace”.

Like a gathering cloud, the first symptoms of an economic crisis begin to appear, to which Fidel Castro attached the euphemism of “Special Period in times of peace

While trying to satisfy the immense appetite of a twentysomething, the protagonist of Our hunger in Havana it must also deal with the ethical deterioration of a society willing to do almost anything to put something on the plate. With his bicycle, which crosses the city from one side to the other, he witnesses the increase in assaults, the massive hunting of stray cats to eat them, the increase in prostitution with foreigners and the only line in which he continued to comply and overcomply throughout the country: repression.

Upon completing his studies, the young man gets a job at the Colón Cemetery, the place that puts the lid on the dramaturgical knob of history. There he lives with the looting of tombs, the nameless niches of those who had fallen into disgrace and the juggling of a state work center where denunciations and incriminating reports were the order of the day. The necropolis inserted in that other city of the dead that on the other side of the walls multiplied the tragedy of the graveyard.

And sex and distilled alcohol, as the escape routes from all that oppressive reality. An impudent nation that took advantage of every staircase, every dark building to love each other with that frenzy that would have preferred to bite into a hamburger. Drink until you forget about hunger or kiss until you fall asleep and not have to think about the condensed milk that they no longer sold, the beef that had disappeared or the chocolate that had become a mythological product that was talked about in circles around the candle that alleviated blackouts.

However, despite the punctual description of all that collective famine that left us with rags as underwear, he pulled out our collarbones until it seemed that they were going to burst the skin and forced us to live with the muffled growl of the pig to which He had undergone surgery so that it would not sound in the bathtub of the apartment where he was raised, none of that leaves such an overwhelming feeling as the return of that nightmare.

Read Our hunger in Havana right now inside Cuba it is like unfolding the map of scarcity that has once again taken over our country to review which seasons we have gone through and which ones we still have to live through again. The nod in the title to the novel by British writer Graham Greene anticipates that this time it is not about following the trail of spies or discovering conspiracies, but rather about pursuing the never through the intricate paths of a dysfunctional system.

Even if you have a plate at hand and chew for a while, you sense that everything has been a fiction of bonanza and that soon hunger will jump

While my eyes traveled the pages of this book by Enrique del Risco, the rooster that the neighbor raises on the balcony barely allowed me to concentrate. When I was already halfway through the volume, I had to interrupt it for two days because a friend called me to go “to the country to buy food” that we later hid in the trunk of an old vehicle and that’s how we managed to get it into the city. He had barely finished processing the last few paragraphs and a relative told me that he had turned his grandmother’s mahogany window into firewood because in his town “there are no blackouts anymore, only lighting.”

There is a hunger that never goes away because there is always fear that it will return. Even if you have a plate at hand and chew for a while, you sense that everything has been a fiction of prosperity and that soon hunger will jump from a corner and take over your table. It is the hunger that haunts an entire country, including those who emigrate and who in the early days outside the Island swallow everything they can and what they could not before.

We have returned to that point that Del Risco details in his text: to the nervous autophagy of an entire people willing to leave nothing where they can sink their teeth.

Crisis and autophagy in Havana, the cycle that does not end

There is a hunger that is not satisfied with food

The Public Ministry of Nicaragua, controlled by the regime of

Rain and storms continue through the weekend

The stationary front that has affected our country since last

China donates 100,000 dollars to Cuba for the repairs of the Saratoga hotel

(EFE).- The Government of China delivered this Friday to Cuba a donation of 100,000 dollars to

After losing the flavor, the "Ice Cream Cathedral" in Cuba lose the queues

Coppelia, the “Cathedral of Ice Cream” in Cuba, in the heart of Havana’s Vedado, has always

A new fuel crisis looms over the country, judging by the long queues at numerous service