Five years have passed since the murder of Javier Valdez Cárdenas, a correspondent for the day In Sinaloa. And justice does not come.

Everyone knows it, but who also has the documentation to prove this cruel truth is the lawyer Sara Mendiola, assistant to the Attorney General’s Office (FGR) and legal advisor to Javier’s family. And that is why she states unequivocally: “There will only be complete justice when the intellectual author of the murder, Dámaso López Serrano, the mini licbe brought to trial and sentenced in Mexico.”

And it is that until today, the only arrest warrant that remains to be executed is precisely that of López Serrano, who is the son of Dámaso López Núñez, who is also a compadre of Joaquín El Chapo Guzman Loera. He is the one who, according to the investigations, ordered the death of our partner.

The Mexican government has already asked the United States for the extradition of the mini licbut the request has not been answered, reports the head of the Specialized Prosecutor’s Office for the Attention of Crimes Committed against Freedom of Expression (Feadle), Ricardo Pérez Sánchez del Pozo.

In the United States, López Serrano has already been sentenced in one of the criminal proceedings he is facing, but he will not be handed over to the Mexican justice system until the authorities of that country decide so, because he currently has the status of a protected witness so that he can testify in court. judgment of El Chapo Guzman, former leader of the sign from Sinaloa.

Javier Valdez was murdered on Monday, May 15, 2017. That day, as was his custom, he went to Bistro Miró, in downtown Culiacán. He arrived shortly after seven in the morning, he occupied the same table where he had spent years drinking coffee while reading newspapers and writing for a while on his computer.

He stayed there almost three hours. He left the restaurant and went to the facilities of the weekly newspaper Ríodoce to define with his colleagues the contents of the publication for the following Monday.

Minutes before 12 noon, he left the newsroom carrying the leather bag where he kept his computer and cell phone. She had agreed to eat at her house; she would stop by to buy some roasted chickens.

Half a block from where the weekly is located, on Teófilo Noris Avenue, three gunmen were watching him aboard a gray Versa car.

He is also the author of Levantones. True stories of the disappeared and victims of drug trafficking, among other successful books, already in his car he drove a block and a half, and in front of the Los Jardines children’s stay, located at number 229 on Vicente Riva Palacio avenue, he received the fatal shots. He was murdered. His attackers took Javier’s car and it took the local police 15 minutes to receive an alert call.

▲ The journalist broke his last birthday cake on April 14, 2017. A month later he was executed when he was leaving the weekly newspaper Ríodoce, of which he was a co-founder.Photo the day 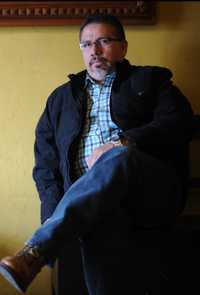 ▲ The request to extradite the intellectual author of the death of the collaborator of the day still unanswered.Photo Marco Ruiz/ The debate

Two of the commandments were fulfilled. In March 2020, Heriberto Picos, El Koala, was sentenced to 14 years and eight months in prison. He agreed to collaborate with the FGR and therefore obtained a reduced sentence.

In June of last year, a federal judge sentenced Juan Francisco Picos to 32 years in prison. the keel. In his case, the hitman filed an appeal against his conviction and is seeking a declaration of innocence. On the contrary, the FGR wants the sentence to be extended.

The investigations of the Feadle refer that the order to assassinate Javier Valdez was given in the week of May 7 to 14. Dámaso López Serrano went to the town of El Dorado, Sinaloa, a community near Culiacán, met with his most trusted assassins and arranged to assassinate the journalist in exchange for 100,000 pesos and a weapon that had the Dámasos logo as its distinctive.

Five years after the crime of Javier Valdez, his case is still unfinished. We cannot say that there is no longer impunity, although the authorities carry out many actions to bring Dámaso López Serrano, the intellectual author of the crime, to Mexico.affirms the lawyer Sara Mendiola.

The extradition request is pending. The United States authorities will determine when they would be ready to hand him over to the Mexican justiceRicardo Pérez Sánchez del Pozo insists in turn.

the mini licwho tried to snatch the leadership of the sign from Sinaloa to the children of Joaquín El Chapo Guzmán after his extradition to the neighboring country in January 2017, lost the dispute, fled Mexico six months later and turned himself in to the DEA.

The FGR tried to question him about the murder of Javier Valdez and obtain his confession that he had ordered the murder because, in a text about the drug trafficker, Javier called him a prop gunman. But the mini lic he refused to appear before the Feadle.

“Complete justice, when El Mini Lic is tried and sentenced in Mexico”

MEP: Ortega judges “will have to answer for their actions”

The judges who are part of the repression scheme led

As a requirement to prevent the spread of the Covid-19

A Fourth Estate report denounced the alleged plagiarism in bachelor’s

MEP: Ortega judges “will have to answer for their actions”

Ricardo Monreal receives support for the Presidency in Quintana Roo

Those attending a rally of the candidate for the governorship of Quintana Roo, Mara Lezama, who

Cases of childhood hepatitis, unrelated to the outbreak in the United Kingdom, says López Gatell

Cases of childhood hepatitis, unrelated to the outbreak in the United Kingdom, says López Gatell Laura

Explosion in Tlalnepantla prison leaves 3 injured; They are transferred to CDMX

Morelia reigns in Expansion but without the option of promotion