The Confederation of Organizations of State Officials (COFE) published a statement on Tuesday in which they reject the statements of the Minister of Economy and Finance, Azucena Arbeleche, who assured at a press conference that the Uruguayan economy will grow by 3.8% in 2022 and that jobs were recovered while the fiscal deficit was reduced.

According to COFE, the government lowered the salaries of public officials for two years in a row, with the salary adjustment being 4.41% on January 1, 2021, while inflation in 2020, measured by the evolution of the Price Index to the Consumer, was 9.41%. This being the case, COFE understands, the “salary loss” was 5%.

“In two years, accumulating the wage loss, the government lowered wages by more than 6%. This salary reduction means a cut of more than 400 million dollars, which has a direct impact on salary income,” the statement added. 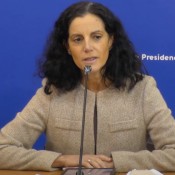 Different vision from the government

“For the government, the salary reduction means recovering lost salary, a conception that we totally reject. To recover salary, the salary adjustment must, first of all, be equal to inflation. What exceeds this percentage will be recovery, something that has not happened since the current government took office,” they added, alluding to the government’s way of seeing things regarding salary.

El Monteagudo is one of the three care centers for

Page Seven Digital In response to the statements made by

The Ministry of Justice approved the Resolution No. 171/2022 that

Social Policy Cabinet agrees to be able to rebuild homes

The Social Policy Cabinet and the National Federation of Workers

The Dominican Republic must update legislation on human trafficking

This is Enriqueta, an establishment dedicated to gastronomy, located in Parque Rodó (passage Prof. Jerónimo Zolesi

Mieres: salary recovery this year “begins to be between question marks”

Photo: Twitter / MTSS The recovery of the salary lost during the pandemic that began in