▲ Former President Pedro Castillo is transferred in a police vehicle after leaving the Prefecture of Lima, where he was detained after being accused of rebellion when trying to dissolve Congress.Afp photo 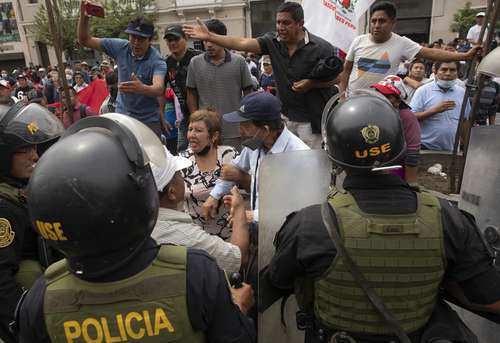 ▲ Supporters of Pedro Castillo demonstrate in front of the Congress, in Lima. The Legislature, with an opposition majority, agreed yesterday to remove by permanent moral incapacity to the Peruvian president.Xinhua Photo

Buenos Aires. Bolivia condemned yesterday the harassment of elites against popular governmentswhile Honduras noted strongly what he considered a coup against the now former Peruvian president Pedro Castillo, while other Latin American nations such as Argentina, Brazil, Colombia, Chile and Ecuador expressed their concern about the situation in the Andean nation.

The United States rejected attempts to undermine democracy by announcing that it no longer recognized the Peruvian ruler until yesterday, and the European Union advocated dialogue to overcome the crisis.

From the beginning, the Peruvian right tried to overthrow a government democratically elected by the people, by the humble classes that seek more inclusion and social justice.asserted the Bolivian president Luis Arce, who sent his solidarity to the sister Republic of Peruand whipped the constant harassment of anti-democratic elites against progressive, popular and legitimately constituted governments. she asked that all and all condemn this situation.

We advocate for democracy, peace and respect for human rights, which prevail for the benefit of the Peruvian peopleArce added.

In the same vein, hours before the deposed former Bolivian president Evo Morales tweeted: Beyond mistakes and successes, brother Pedro Castillo and his family deserve humanitarian treatment. We prove once again that the Peruvian oligarchy and the US empire do not accept that union and indigenous leaders reach the government to work for the people.

Brazil stressed that the measures taken by Castillo to dissolve Congress and decree a curfew represented a violation against democracyand the president-elect, Luiz Inácio Lula da Silva, said that Castillo’s impeachment process took place within a constitutional framework.

I followed with great concern the events that led to the constitutional removal of the president of Peru, Pedro Castillo. It is always unfortunate that a democratically elected president has this luck, but I understand that everything was sent within the constitutional frameworkLula said in a statement. She added that she hopes that all the country’s political forces will work together with the new president, Dina Boluarte.

The Chilean government trusts that this crisis affecting the sister country can be resolved through democratic mechanisms and respect for the rule of lawpointed out the Chilean Executive.

Honduras also demanded respect for the physical integrity and human rights of Pedro Castillo, and the Ecuadorian president, Guillermo Lasso, called on all the political actors of the neighboring nation to “maintain the rule of law (…) and the international community to facilitate the democratic process in Peru”.

Debate at the OAS

What happened today in Peru, when Pedro Castillo dissolved the Congress of the Republic without a constitutional, legal or normative basis, constitutes an alteration of the constitutional order in the countryassured Luis Almagro, Secretary General of the Organization of American States, at the extraordinary session of the Permanent Council of the organization.

In the session, the representatives of Mexico, Ecuador, Paraguay, Brazil, Chile, Uruguay, Argentina, Bolivia, Colombia, Panama, Antigua and Barbuda, the Dominican Republic, the United States and Costa Rica asked for the floor to demand respect for the constitutional order.

Former Honduran President Manuel Zelaya (2006-2009) and leader of the ruling Libertad y Refundación Party, supported Castillo. We strongly condemn the coup in Peru that violates the sovereign will of the people, represented by President Pedro Castillotweeted Zelaya, who was ousted from the Honduran presidency by a military coup on June 28, 2009.

United States rejected categorically any attempt to undermine democracy and affirmed that he no longer considers Castillo as president of Peru, by assuring that the Peruvian congressmen took corrective measures according to democratic rules.

I understand that, given the action of Congress, it is now former President CastilloState Department spokesman Ned Price told reporters.

The European Union yesterday called for dialogue to ensure stability in Peru, while the Spanish government condemned the breakdown of the constitutional order carried out by Castillo and later celebrated the restoration of democratic normality.

Athletes highlight the importance of betting on sports in Chaco

The National Secretariat of Sports with its policy of decentralization

Fuel prices from December 31 to January 6

Cristina got her San Martin

From how the desire? Thus the price of the grape prior to the toast

Those who aspire and play dirty are reverted, AMLO warns for 2024

Morenista deputies will withdraw billboards in support of Claudia Sheinbaum

This week, after the appearance of dozens of spectacular announcements, painting fences and banners with the