▲ In the image, transfer of workers in San Isidro Mazatepec.Photo Arturo Campos Cedillo 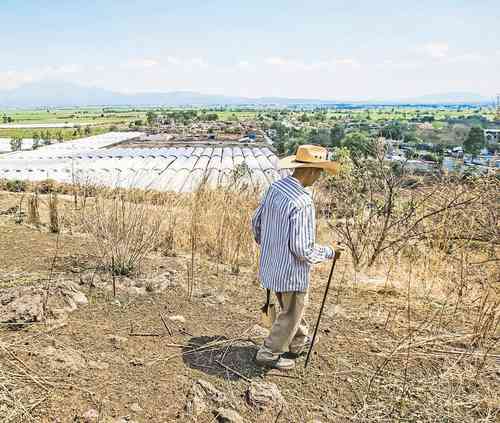 ▲ In the image, panoramic view of the municipality of Jocotepec.Photo Arturo Campos Cedillo 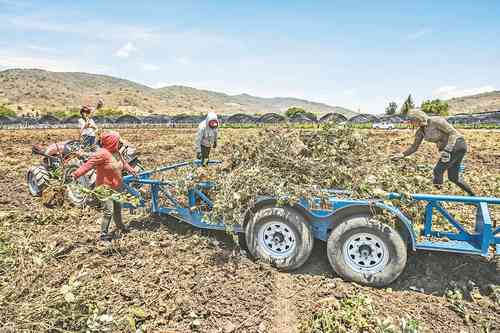 ▲ Cleaning and preparation of the field for planting in Jocotepec, Jalisco. Some only have a Coke and a Gansito for breakfast They earn between 1,700 and 6,000 pesos a week

Jocotepec, Jal., It is 10 in the morning in a New York coffee shop. There, a person eats an Ayurvedic bowl of quinoa with raspberry and blackberry for breakfast, for 10 dollars. The berries they help slow down aging, he’s been told. At the same time, but 4,200 kilometers away, in a raspberry field in Jalisco, a day laborer sits on the pasture to have a Gansito with Coca-Cola for lunch to recover from three hours of hard work and recharge energy to continue until let the sun disappear

The insatiable demand from the United States has led Mexico to become the third largest producer of berries of the world. Jalisco, specifically, produces 60 percent of the berries that are sent to said nation. This boom, according to the workers in the fields themselves, has brought benefits to the region and to their families, since the salary is a bit better; and although their body reflects the tiredness of those they describe days from sun to sunhis words only express resignation.

On the southwestern shore of Lake Chapala, in Jocotepec, Jalisco, there is a small boardwalk with a wooded park, which is the meeting point for families and day laborers from agricultural fields who on weekends come to watch the sunset under the lullaby of the gentle waves and breeze.

In that place, with the sun about to go down, four field workers are sitting on a log. berries that, despite having within reach this fruit that slows down agingtheir thin bodies, almost to the bone, and deep circles under their eyes, which frame tired looks, reflect the harshness of a lifetime of work in the fields.

It’s Saturday, today the job ends earlysays Juan while holding a can of beer in his hand. He is a day laborer in the El Zapote community, although for security he prefers to omit the name of the ranch where he works.

With a slow voice and lowered eyes, he shares his experience in the fields of berries; It is the best job that can be found hereand immediately add: The whole year there is pull, a week we earn 1,800 pesos, in other places it is less, although the so-called union takes a lot of money from us and also that of the insurance; when there is a harvest it is good, at least you get about 4 thousand extras a week; I am good at pisca, I fill about 270 buckets, there are months that I earn up to 30 thousand pesos, although it is only one season.

In the interior of the country, the harvesting of the crop, especially grains and fruits, is known as pisca. In the case of berries It is a strenuous activity, since the day laborers, half of them women, enter tunnels covered with white tarpaulins that serve to protect the fruits from the sun, so that, although they also prevent the workers from receiving direct rays, there are temperatures up to 40 degrees.

The piscadores, as the collectors are known, not only must endure that heat, but also, to protect themselves from the sun and the chemicals that are concentrated, it is necessary to always wear a long-sleeved sweatshirt, a hat and preferably a wet handkerchief. both on the forehead and neck.

It sucks being in there, even though you feel like you’re going to faint, now imagine others who can’t even eat. There are many who can’t stand it and faint in there, especially many women, who want to earn more and work from morning until nightfall.says about how hard it is to work in the field.

There are patrons who don’t give you a chance to eat, that’s why I always tell them that it’s fine, I go in at 6 or 7, whatever they want, but at 10 you have to stop to have a taco, even if it’s a Coke and a Gansito. I keep screwing him and at 2 or 3 some tortillas with beans and now yes, if he wants I can last until 9, but without eating, no, that’s not possible, that’s what many lack, demanding that they give them a chance to eat wellJohn adds.

The harvest season is the opportunity that workers have to increase their income, since their weekly salary is regularly between 1,700 and 2,000 pesos; however, according to the testimonies of workers and producers, the pisca can provide them with an additional income of 4,000 pesos on average.

According to various testimonies collected by the day, each bucket filled by a worker, approximately 30 centimeters long, is paid 3.5 pesos. On average, a fisherman fills between 150 and 200 buckets, although there are some more skilled ones like Juan, who, of his 35 years of life, says that he has been in the field for almost 20. 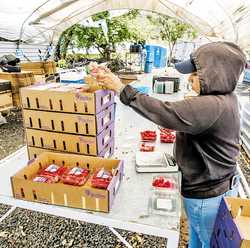 Toño is another day laborer in the region who seems not yet to reach 30 years old, he says he is happy with his work, because in addition to the salary being good, he also has social security. And although the work is very heavyAdd, leave to eat Here there is chamba, so much that they even come from other states, the one who does not have to eat is because he is a jerk.

Nearby is Miguel, a peculiar day laborer, he is a Californian of Mexican origin who is not more than 20 years old and barely speaks Spanish, he says he came to Jalisco to live the mexican experience. He does not complain, he says that the work is hard, often exhausting, but that is what it is about, getting to know the land of his parents and recognizing his roots in farm work.

He has no specific plans, but for now he is in Mexico so that his relatives can teach him everything they know about the field and then return to the US to apply it.

Another case is that of Manuel Herrera, foreman of the Los Mangos ranch, who says that the day laborers have hours from 7 in the morning to 4 in the afternoon, although they leave at 2 on Saturdays and do not work on Sundays. That is when there is no harvest, because I work all year round, we have to build the tunnels, clean the fields, leave them clean. When you pick it is different, if there is a lot of fruit, people leave very late.

In Teuchitlán, in the archaeological zone of Guachimontones, where the only circular pyramids known in the world stand out –built 100 years before the Christian era–, María, a woman who is part of the group of watchmen who take care of the unique buildings pre-Hispanic, is bored and yawns while fulfilling his eight-hour shift.

“Here one has to be battling with tourists, with visitors, many are very stupid when we ask them not to sit on the steps, not to climb the pyramids. The truth is that I prefer the countryside, the work is harder, but there one is freer, in the open field, now with the arrival of the plantations of berriesearn a slightly better one and, like here, you have all the benefits”, he says.

Besides, as a woman things are better, we are better at cutting raspberries, more delicate, we don’t hurt the fruit as much. The bosses prefer us. And at harvest time we earn morehe adds.

Data provided by Juan José García Flores, president of the National Association of Exporters of berriespoint out that the industry employs around 420,000 people throughout the country, even so, he says, at harvest time there is a lack of pickers, so in the case of Jalisco, up to 60 percent of daily collectors are from southeastern states of the country.

The rise of berries, he says, it is so much that there are companies that, despite bringing from other entities, lack between 8 and 10 percent of the workers. “In the berries there is work all year round; before the average wages were 1,800 a week, now they are 2,000, in addition, we are an example in gender equality, since 50 percent are women. Here the most dangerous thing is that they get stung by a bee if they are allergic”.

García Flores also ensures that all workers work eight-hour days, and if they work longer, they are paid overtime.

Asked if the day laborers receive a fair and decent payment for their hard work, the president of Aneberries says: The standards are met in accordance with the Federal Labor Law, there is a salary above the minimum, work is being done to improve it, but I believe that many have a more than decent salary.

The population says that working in the fields of berries it means a better income, since the 8,000 pesos a month they earn are better than the 5,000 earned in other areas, such as corn or sugar cane. Although this is still far from the 30 thousand pesos that workers in the US earn for the same heavy work. In the end, life in the country is reduced to the words of Juan: It is the life that we had to live, one of screwing him from morning to night, we have no choice but to give it a go, and when you can give us a little beer or even a touch to put up with the fuck.

▲ In the image, transfer of workers in San Isidro

Families do not support increases in food for “half-eaten”

When her life partner gets a ‘course’ in the construction

“I don’t have to put up with insults”

Óscar “Nenecho” Rodríguez, mayor of Asunción, reported that he has

Families do not support increases in food for “half-eaten”

The highest number of cases reported in the last month corresponds to Saturday, July 2, when

Specialist recommends taking care of the diet during the holidays

New audios of Alito Moreno: he insults businessmen and asks "boat" for allies

“Germán Larrea, Baillères, those from Gicsa, Álvaro Fernández, ching… to your… When I have the commission,