The fortune that is managed behind the drug trafficking business attributed to the former pro-government deputy Juan Carlos Ozorio drags the bank of the owners of the newspaper Abc Color. Atlas appears in a fiduciary contract of a property of the former legislator mired in the illicit drug trafficking

A Ultranza Py exposes several politicians involved in the drug trafficking business. The recent severe beating that occurred after the mega-operation fell on the former pro-government deputy Juan Carlos Ozorio, involved up to the neck in the crime, according to the audios revealed by the communicator Alfredo Guachiré. 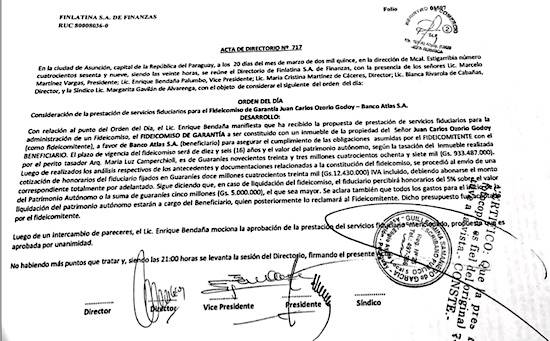 Mansions, large buildings such as retirement homes, large groups and an infinity of assets appeared with the raids, among which those carried out on the properties of fugitive pastor José Insfrán and his church, Ozorio’s main ally in the business, gained notoriety, according to the transcended. This earthquake that dragged down today’s former legislator begins to shake the financial system and the name of the Atlas bank jumps, owned by the owners of the newspaper Abc Color, which is not playing a leading role in the “firsts” resulting from the anti-narcotics procedures.

Leaked documents show that Atlas has a contract to provide fiduciary services with the deposed former deputy Ozorio dating from 2015 and for a term of 16 years. That is, the trust agreement between Atlas and Ozorio is valid until 2031.

The agreement consists of a guarantee trust constituted with a property owned by Juan Carlos Ozorio valued at that time at G. 933 million, according to part of the contract attached to this article.

Leaked documents show that Atlas has a contract to provide fiduciary services with the deposed former deputy Ozorio dating from 2015 and for a term of 16 years. That is, the trust agreement between Atlas and Ozorio is valid until 2031.

The agreement consists of a guarantee trust constituted with a property owned by Juan Carlos Ozorio valued at that time at G. 933 million, according to part of the contract attached to this article.

Considered a drug logistics arm, it also operates with the Zuccolillo bank 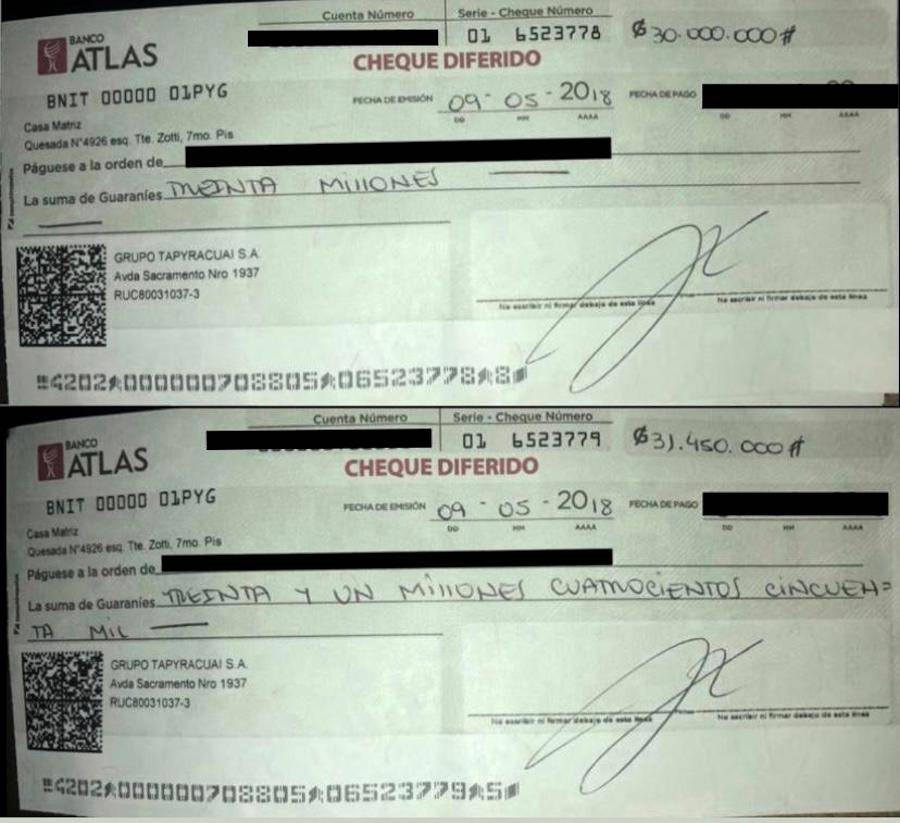 Checks with which Alberto “Beto” Koube’s company paid for freight services that it subcontracted for the SEN.

During the administration of Joaquín Roa, the company of Alberto “Beto” Koube, designated as a member of the international drug trafficking scheme, was favored with contracts for G. 3,000 million in freight in the SEN, however, he made subcontracts whose payments they ran through the Atlas bank.

Data continues to come to light regarding the striking hiring of the National Emergency Secretariat (SEN) at the time that Joaquín Roa was minister of said portfolio. Leaked checks reveal that Alberto “Beto” Koube’s company subcontracted services that the former minister awarded directly, whose payments ran through the Atlas bank, owned by the Zuccolillos.

The firm of “Beto” Koube raided in the A Ultranza Py operation has CDA in the Cooperativa 8 de Marzo, as well as in the Atlas bank, GNB BANK and Continental.

Precisely, through the Tapyracuai Group, “Beto” Koube won contracts for G. 3,000 million between 2018 and 2019 in the SEN. The firm was awarded directly to provide freight services to the National Emergency, however, what the firm did was subcontract other companies to carry out the work.

Tapyracuai payment leaks revealed that in 2018 “Beto’s” company issued checks on more than one occasion to pay for the outsourcing of freight services to the SEN. Several checks with Atlas bank letterhead were issued by the favorite supplier and close friend of former Minister Joaquín Roa in the freight service scheme for the SEN.

It should be remembered that the contracts between the SEN and Tapyracuai were made outside the Public Procurement system, so these awards are not registered on the DNCP portal. Nor should we forget that in the midst of these discretionary contracts is the already famous purchase of the luxurious yacht by Roa from his former preferred supplier.

Former minister Joaquín Roa had pointed out in a radio interview that the awards to the Koube companies had been made because they met all the requirements indicated in the Bidding Terms and Conditions (PBC), and that their bond of “friendship ” did not influence these contracts, however, the SEN also contracted the company of “Beto’s” partner for a freight service, without it having a single truck.

The president-elect of Costa Rica, the right-wing Rodrigo Chaves, considered

The Ministers of Women of Argentina and Chile toured Barrio 31

Orellana is the youngest minister in the cabinet of the

The National Police reported on Monday the arrest of five

Peru. AFP Photo A partial strike of cargo and passenger

They present a motion of censure against the Minister of Health, Hernán Condori

Óscar “Nenecho” Rodríguez, mayor of Asunción, summoned 10 ministries and other public entities to pay the

Milan ties and opens Serie A

Milan played to remain the leader at home, with a full field and against a team

Faced with IPS’s refusal, a woman with a tumor on her face will undergo surgery in Argentina

After receiving a refusal from IPS, Juana Mercado, who has a tumor on her face, will

In the course of the afternoon, the DNCP published that the company Kurosu y Cia Sa

On March 13, the Liberal Convention approved an external audit of the management of the head