The bench of Free Peru protested outside the Congress for the attempt to ban a forum on the constituent Assemblywhose main speaker was the sentenced former regional governor of Junín Vladimir Cerrón.

In this regard, the legislator Margot Palacios He questioned that the Board of Directors has closed the auditorium to hold said event, pointing out that it is not going to stop what it has been proposing on the platforms of struggle.

“The Board of Directors believes that closing an auditorium of the Congress of the Republic will stop the constituent moment that Peru is experiencing, it thinks that closing the doors to debate and give opinions will stop what today a large sector of Peru has been calling for. and it has been proposing as an agenda in its platforms of struggle”he expressed.

LOOK: Coca-Cola Foundation presents Coastal Cleaning, the initiative to clean the beaches of the Peruvian coast

For his part, the spokesman for the official caucus, Waldemar Cerronpointed out that it is intended to close the doors to a forum “fully legal and democratic”and announced that the event will take place in one of the premises of Peru Libre.

The bench of Peru protested outside the Congress for the attempt to prohibit a forum on the Constituent Assembly, whose main speaker was the sentenced former regional governor of Junín Vladimir Cerrón. (Video: Channel N)

Last Tuesday, before the imminent presentation of Vladimir Cerronthe Board of Spokespersons of the institution agreed to prohibit events in which topics that go against the current Magna Carta and the participation of people who have sentences as exhibitors are prohibited.

That is why this Wednesday the senior official of the National Parliament, Hugo Rovira Zagal, communicated said decision to all the spokesmen of the different parliamentary benches.

Likewise, the day before, the president of Congress, Maria del Carmen Alva (Popular Action), indicated that the forum promoted by the caucus of Free Peru he did not have authorization for not having complied with the respective procedures.

Despite this, the members of the ruling caucus held said forum, where they discussed the Importance of calling a Constituent Assembly to draft a new Political Constitution to replace the 1993 one.

In a video posted on social media, former President of the Judiciary Duberlí Rodríguez can be seen as one of the speakers at the event, who was previously announced along with Vladimir Cerron, who did not participate. Next to him, his brother is appreciated Waldemar Cerron. 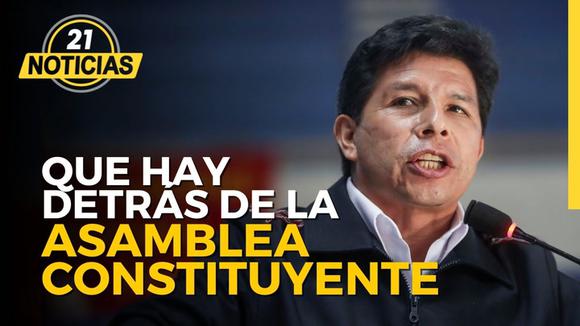 The government seeks to give the peasant patrols the status of an indigenous community, while in its NEW CONSTITUTION project it grants these communities 26 of the representation. Specialists warn that a referendum would be a distraction in the face of a political crisis. KUÉLAP also suffers from the apathy and neglect of the State.

Primax is chosen “best fuel station” by the business sector

The chain of fuel stations primaxwas chosen as the “Best

Guido Manini Rios. Photo: Chamber of Senators In an unusually

The magistrates reached this conclusion after verifying the holding of

Strategically, the EPP is defeated, according to Joint Task Force

Primax is chosen “best fuel station” by the business sector

The chain of fuel stations primaxwas chosen as the “Best Fuel Station” by the business sector.

Citation. Lilia Paredes, former first lady of the nation, was summoned to a new face-to-face hearing

A total of 84 of the 99 mayors, together with their councilors, from the populated centers