[LO MÁS VISTO] “So, old as you see me, I work because I don’t have a salary, I don’t receive bond neither pension 65”exclaims the 83-year-old grandfather, better known as ‘Ayrampito’, an octogenarian who earns his daily bread with his hard work in a mechanic in Chilca.

When he goes to work in the workshop on block 2 of Jirón Áncash in Chilca, he adjusts an old face mask cloth for protect yourself from COVID, since at his age, the disease could be fatal. In addition, he changes into an old suit soaked in car oil and puts a cap on his head that barely covers his eyes to protect him from the inclement sun.

Then, the hard work begins to maintain an old Mahindra truck, to which he makes some arrangements. He works alongside the owner of the store, who gives him part of the profit, about 20 soles a week, so that he can survive. There are days when there is no work and he does not receive anything, and his acquaintances, out of compassion, invite him to lunch.

However, his concern is that a month he must collect about 100 soles, to pay the rent of the room in the fifth where he lives. There he also raises his guinea pigs, to eat something nutritious from time to time.

they don’t call it

When Ysidoro Martín Ramos Torres (84), talks about his children, cries bitterly. “My children are in Lima, they have abandoned me, they don’t communicate, I haven’t heard from them for 10 years, they don’t miss me or send me a penny”rebukes the humble old man, who is resigned to continue working until the forces accompany him.

His health is complicated, his eyesight is affected, he doesn’t hear well, so when they look for him he calls his friends from the workshop to help him understand and they shout in his ear.

Because of the hard work he does, his hands are calloused and cracked from the chemicals.

Despite all the difficulties, he is very determined, is in charge of the autogenous welding of the vehicles that enter the ironing and painting workshop, it also fixes the plates.

He learned this trade in his youth when he did his military service.

The owner of the place has already told him that he can no longer work, and that it would be better to give his position to young people, but Ayrampito always asks him to have compassion and let him be there. In addition to mechanics, he also works on the farm, when it is harvest time.

On May 3, the grandfather went alone to the International Business Center in Yanama, where he received the first dose of the vaccine against COVID-19. That time, the nurses were moved to see him without relatives. On May 24 he came back again just for the second dose.

Although he has SIS, when he goes to the health center, they do not treat him because of the pain he has in his body, but he knows that if he wants to go to the hospital or a clinic, the few soles he saves will not be enough.

That is why he asks the authorities to support him and grant him Pension 65, for which he is willing to let them enter the room where he lives and verify that he is in extreme poverty.

IT MAY INTEREST YOU 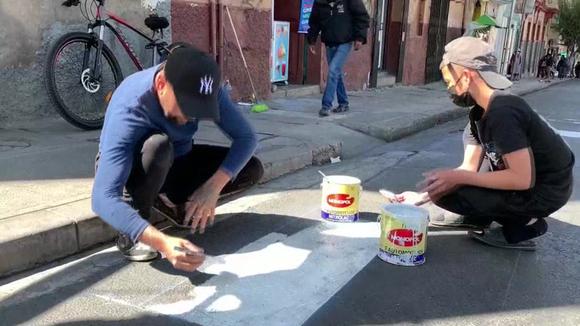 The Venezuelan Adrián Valero and his family are on their feet every day from 8 in the morning to repaint the zebra crossings in the streets of La Paz. In eastern Santa Cruz, Bolivian Ronald López goes out with a street cart every day to sell masks, hand sanitizer, and other biosafety items. (Source: EFE)

TEST YOURSELF WITH MAIL TRIVIA