The Assembly will discuss in the coming days the pardon of people accused of committing acts of vandalism in the protests of October 2019. The request calls into question the impunity of the attacks on the Comptroller’s Office and other State infrastructure.

27 people who are being investigated for burning documents and destroying part of the Contraloría building, in the protests of October 2019, are waiting to obtain an amnesty. The Assembly has until March 14 to decide whether or not to grant a pardon to those who allegedly were inside the Comptroller’s Office when it was on fire.

In total, there are 269 amnesty requests approved by the Constitutional Guarantees Commission and that must now be analyzed in plenary. 80% have to do with legal proceedings against defenders of nature. There are also human rights defenders and administrators of indigenous justice.

A long process full of complaints

3 people related to the demonstrations of October 2019, are Paola Pabón, Leonidas Iza, Virgilio Hernández, there are another 27 investigated for damages to the Comptroller.

In the Prosecutor’s Office there is a long file with the process. At first, a judicial case for Terrorism was initiated. After a month, the charges were reformulated and now they are on trial for three crimes defined in the Comprehensive Organic Criminal Code (COIP): crimes of sabotage (art. 345), crime of taking public facilities (art 346) and crime of destruction of records (art 347)

Indigenous people say they are not guilty

According to documents from the Prosecutor’s Office, several indigenous people from Chimborazo, Cotopaxi and Pastaza, among others, are on the list of culprits.

Their lawyers allege that they are farmworkers, college students or businessmen. Even among the discharge tests there are certificates of honorability, of affiliation to the Conaie and even certificates of belonging to evangelist groups.

The truth is that, according to the police report, all the people cited were apprehended inside the facilities of the Comptroller’s Office. “Several of them gave off a strong smell of fuel (gasoline).”

According to the Central Bank of Ecuador, the damage and losses to the institutional infrastructure amount to $39 million.

For the vice president of Conaie, Senaida Yasacama, many of the actions of October 2019 were part of the right to resistance, which is why she believes that the amnesty is fair.

For the president of the Constitutional Guarantees Commission, Fernando Cabascango, the objective is to fight against the criminalization of protest. Meanwhile, Mario Ruiz, assemblyman for Pachakutik, said that the amnesties “are not only for the innocent.”

Dr. Ángela Porras, trial lawyer, says that the slowness of the Prosecutor’s Office could be responsible for leaving the facts unpunished for not achieving a sentence in more than two years; but not the fact that the accused obtain an amnesty because they have not been sentenced and, while that does not happen, the presumption of innocence prevails.

Correistas are among those involved 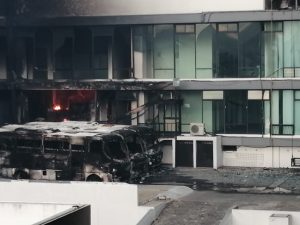 A few days after completing the 36 months of preventive

They arrested the head of Generación Zoe in the Cordoba capital

Mariela Sánchez is charged with alleged “repeated fraud and illicit

This is undoubtedly one of the most famous recipes in

Deputies endorse more powers to the FIU to block accounts

"My biggest fear is setting foot in the Havana airport"

Lázara Karenia González, arrested for participating in the peaceful protests on July 11 in Cárdenas, Matanzas,

Without explanation, the Mexican Viva Aerobus suspends its flights from Cuba to Managua

Viva Aerobus flights between Cuba and Nicaragua, one of the main escape routes for Cubans intending

With barbed wire, the governor of Texas seeks to prevent the crossing of Cubans into the US