The ‘Tía Goya’ has died, and hundreds, if not thousands, mourn her departure in Cusco and Madre de Dios, regions where she knew how to make a fortune throughout her 78 years, which ended after a sudden traffic accident that occurred last Friday in the district of Marcapata, belonging to the Cusco province of Quispicanchi.

SEE ALSO: Machu Picchu received half a million visitors in 2021 despite the pandemic

The myth around Gregoria Casas Huamanvilca (78) is confirmed when entering his wake, no less than in the facilities of a tap located on the outskirts of the city of Cusco, where the burning chapel was installed behind the gasoline pumps and next to heavy machinery, which he surely used in one of the many mines that He was driving in the well-known Huepetue area.

A wide burning chapel and the whole place decorated with white and gold fabrics, They are the perfect setting for the farewell to the ‘Queen of Gold’, a woman who could not read or write when she started in the world of mining, until she became one of the wealthiest and most powerful miners in the country.

It was legal, as she always was quick to assure, or illegal, as her detractors and even the Peruvian State itself agreed, the millions of soles it made since the 1970s did not save her from a fleeting death in a small community in Cusco called Yanaturo.

There is so much mystery surrounding the death of Gregoria Casas that not even the Police are sure how the accident occurred, they only mention that in the place described above, The X4S-841 vehicles, driven by Alexander Pezo, and the X4F-702 vehicle, driven by Richard Campi collided.

The police thesis indicates that none of the drivers called the authorities after the fact, and each one withdrew their units as if nothing had happened, while ´Tía Goya´ was assisted to the ‘O2’ clinic in Cusco, where he would have finally lost his life.

After the fact both vehicles were found by the authorities, one was being repaired in Cusco and the other in Ocongate, staff from the Zarzuela Police Station, together with the head of the First Criminal Prosecutor’s Office of Quispicanchi, carry out the investigation into the strange event.

People say that ‘The Queen of Gold’ managed more than 40 thousand hectares of mining land in Cusco and Madre de Dios, at the hand of her husband Cecilio Baca, who even became mayor of Huepetue, the main area of ​​action of the former miners couple.

Between the two they had 10 children, most of whom were seen at Gregoria Casas’ wake at the ‘Kike’ tap in Cusco, It is worth mentioning that the place was packed with people who came to see the deceased off, who was veiled in the midst of Huancavelicana music, performed live by a band brought to Cusco only for the funeral.

With the death of ‘Tía Goya’ a mining chapter is closed that was classified as illegal by the Committee on Mining Formalization, Illegal Mining, Interdiction and Environmental Remediation Affairs of the Presidency of the Council of Ministers, It is said that the patrimony left by the mining company is so vast in terms of money, properties and mines that it would be impossible to consolidate it into one figure.

The relatives, relatives and acquaintances of the ‘Queen of Gold’ continue to arrive in Cusco from all over the region, the country and the world, and await the burial that will take place this Sunday at 10:00 am in a local holy field. 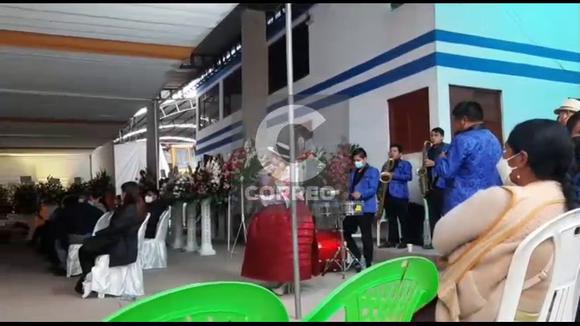 – 50 Years of extractive work had in approximation, Gregoria Casas and her husband in deposits of Cusco and Madre de Dios. It is known that she came to the site to work as a laborer and little by little she became the owner of the place; His trips to Europe and the United States, sponsored by the best heavy vehicle firms, among other luxuries, gave an account of the enormous purchasing power and prestige he had in the national and international mining arena.

Chairing the session was the vice president of the United

The Circus 🎪 | Big feature unattended, Adam on the trapeze and Ken the cowboy

STAR COWBOY In full character of the bailiff who arrives

Increase the adrenaline in the preview of the National Cross Country

Quite a significant growth is projected for this season, counting

Pedro Castillo LIVE: President and Aníbal Torres apologized in the Council of Ministers

peter castle He was elected as president of Peru on July 28, 2021. In the nine