With the windows of the motorcycles broken and some people injured, that was the balance of the confrontation that occurred early this Wednesday morning in the area of ​​the Barrio Lindo Fair between the merchants called “mañaneros” and municipal officials, supported by a group of residents of the area..

The morning players failed to settle in the fourth ringbut they did do it on Cumavi avenue, where -as of 8:00- they bet to sell their merchandise after personnel from the Mayor’s Office and the Police withdrew from the place.

Like municipal officials, some residents of the area They held vigils during the night and part of the early morning, while policemen hovered and guarded the area in order to avoid a major conflict.

The resistance of the neighbors and the controls of the Mayor’s Office, failed to prevent the settlement of informal traders/Photo: Juan Carlos Torrejón.

However, the situation got out of control in the early hours of the morning. Hundreds of “morning men” arrived setting off firecrackers, throwing sticks and stones. The residents rejecting the settlement and the merchants trying to seize the central ridge of the fourth ring road and Cumavi avenue, at the entrance to Villa Primero de Mayo.

during the conflict a van from the Mayor’s Office ended up with broken windows. 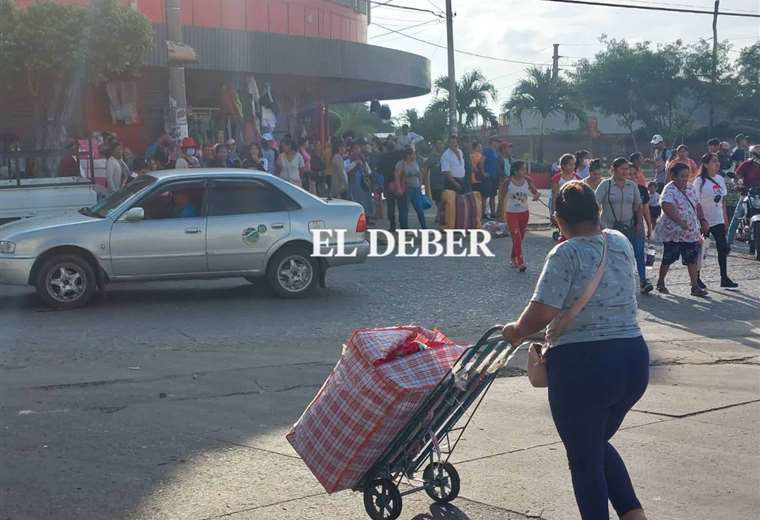 Until before 8:00, the ‘mañaneros’ were not able to settle on public roads/Photo: Juan Carlos Torrejón.

Before 6:00 there was another feint confrontation Its ‘mañaneros’, who were not with their bundles of merchandise, but with sticks and stones, trying to settle in the fourth ring, as on other occasions.

At 7:00, the police and municipal officials withdrew from the place. This situation was taken advantage of so that the merchants set up their stalls in Cumavi.

After the confrontations registered in the area of ​​the Barrio Lindo Fair, residents and officials of the Mayor’s Office prevented the ‘Mañaneros’ from settling on the fourth ring. Video: Juan Carlos Torrejon pic.twitter.com/qryqY3YuDS

A photojournalist from EL DEBER who covered the area of ​​the Barrio Lindo Fair, verified that there was no presence of municipal officials or the Police, and that the ‘morning men’ were keeping vigil at the corner of the fourth ring and Cumavi avenue, he was even rebuked by some informal traders so that I do not take pictures of the crowd of people.

Unlike Saturday, a day where the ‘morning’ They still insisted on settling in the ridge of the room and managed to sell their merchandise in the area, this time the Mayor’s Office and the neighbors managed to prevent them from encroaching on this green area. Moreover, the Mayor’s Office placed a sign indicating that the establishment of merchants in public space is prohibited.

After the confrontations registered in the area of ​​the Barrio Lindo Fair, residents and officials of the Mayor’s Office prevented the ‘Mañaneros’ from settling on the fourth ring. Video: Juan Carlos Torrejon pic.twitter.com/qryqY3YuDS

Goldman Sachs announces that there will be staff cuts in 2023

Goldman Sachs Group is working on a new round of

One more year, there is a shortage of ration cards in Cuba

“All consumers are informed that in January it will be

FGV: rents were 0.36% cheaper in November

"The attempt to ban the Vice President was consummated"

Ismael Rescalvo assumed the technical management of The Strongest