The current most valuable player in the American League, Aaron Judge, will finally stay with the New York Yankees with a contract of 9 years and 360 million dollars, according to information from the MLB page.

This is the best long-term contract signed by a free agent in history, surpassing Bryce Harper’s 2019 contract with the Phillies that was 13 years and $330 million.

The Yankees weren’t the only ones to make Judge an offer, as he was made an offer by the San Diego Padres on Tuesday, but Judge decided to return with the New York team.

It should be noted that TIME magazine chose Aaron Judge as the athlete of the year 2022 for his outstanding performance with the New York Yankees. 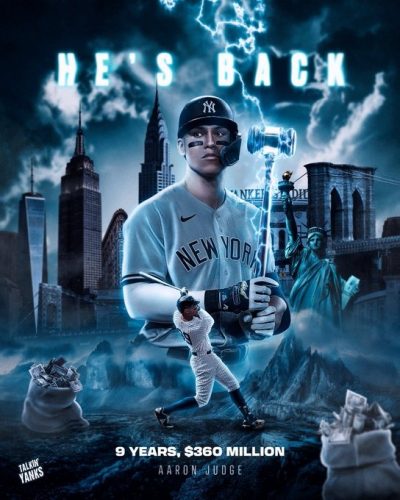 MIAMI, United States. – During the month of November the

Dinatran estimates that more than 40,000 people will pass through the Asunción terminal between today and tomorrow

This Friday, December 30, the Ministry of Health (Minsa) through the Directorate of Health Promotion, delivered

To 2.7% as of November 2022, the modified loan portfolio was reduced, which represents a significant

Although resources have been limited, we have been effective, José Batista, Vice Minister of MIVIOT

Angel Valdes | December 30, 2022 The Vice Minister of the Ministry of Housing and Territorial

Judith Pena | December 30, 2022 A Spa or apparent brothel where men who have sex

Suspect arrested in murder of four University of Idaho students