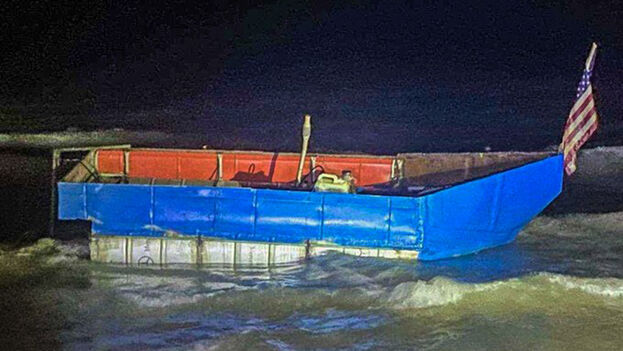 (EFE).- Fifteen Cuban immigrants traveling aboard a homemade boat were detained this Saturday after landing in Key West, Florida, reported the US Border Patrol.

The chief of the maritime sector of the Border Patrol in Miami, Walter N. Slosar, indicated via Twitter that with this there are 78 known cases of immigrant smuggling boats by sea that have arrived in Florida since this fiscal year began, on October 1, 2021.

Meanwhile, this Saturday the search continued for an undetermined number of people missing after the shipwreck of a similar boat that occurred Thursday night near Sugarloaf Islet, south of Key West. One person died and six were arrested after the shipwreckaccording to the Coast Guard.

The six migrants rescued alive were transported to the Lower Keys medical center in Key West to be evaluated and treated for any injuries they may have.

In the current fiscal year, which began on October 1, 2021, more than a thousand Cubans have been intercepted in US waters and, in most cases, have been deported to Cuba.

“We are seeking to speak with Migration chiefs to regularize migrants in this state,” Luis Rey García Villagrán told Efe.

The exodus of Cubans has increased in recent months. This Saturday, representatives of the migrant caravan that left on Friday from the municipality of Tapachula, Chiapas state, bound for Mexico City, began a dialogue with authorities from the National Institute of Migration (INM) to continue their journey after just advance about 15 kilometers on his first day.

“We are seeking to speak with the heads of the National Migration Institute and we are going to speak with its head in Chiapas to regularize migrants in this state,” Luis Rey García Villagrán, director of the Center for Human Dignification in Tapachula, told Efe.

He explained that the logistics of the process and the delivery of cards will depend on the migration authorities. García Villagrán reported that the representatives of these people asked the authorities to resolve the matter of the migrants who left in a caravan and who are stranded in the Álvaro Obregón community.

Since Friday afternoon, some 50 Central and South American migrants, most of them men and some women, have sewn their lips together with a needle and thread in order to pressure the authorities with the issuance of legal stay documents.

Along with this measure, a group of men, mostly from Cuba, Venezuela and Central America, declared a hunger strike to request that the Mexican government provide buses and grant them visas for humanitarian reasons valid throughout Mexican territory.

Mexico deported more than 114,000 foreigners in 2021, according to data from the Migration Policy Unit of the country’s Ministry of the Interior.

The Mexican Commission for Refugee Assistance (Comar) received a record 131,448 refugee applications in 2021. Of these petitioners, 8,302 are Cuban. And this year they added up to February 2,004 requests.

This is the second migrant caravan of the year, after a first contingent of about 500 people that left last January but barely advanced about 20 kilometers due to pressure from the authorities.

The Association of Free Cubans of Uruguay estimates that some 17,000 natives of the Island live in the country

The route to reach the US has led Cubans to transit through other countries, including Uruguay. The National Directorate of Migration (DNM) reported the entry of 1,454 in the first months of 2022.

In the first 20 days of January 135 Cubans entered Uruguay across the border of the city of Rivera with Brazil, as documented by the Uruguayan newspaper The country. “Many of them with coronavirus”, which collapsed a shelter.

The Association of Free Cubans of Uruguay estimates that some 17,000 natives of the island live in the country. And they are the border cities of Chuy and Rivera, the places where these migrants enter and also border crossings that are usually under the control of coyotes.

According to data provided by the DNM, in 2021, 2,886 Cubans entered Uruguay. Currently, hundreds of Cuban migrants residing in Uruguay, Brazil and Chile, go to Peru and Ecuador until they reach Colombia on their way to the United States. They then cross the feared Darien jungle where several have died in recent months.

(EFE).- Fifteen Cuban immigrants traveling aboard a homemade boat were

The creation of a mechanism of independent experts from the

The works of artist Ernesto Deira, held in Chile for 50 years, are already in the country

After 50 years, they managed to repatriate the works held

With a ticket price of 250 pesos, the Cuban Art Factory (FAC) resumes its cultural presentations

Pork production continues to fall and the well seems bottomless. This Thursday the alarms went off